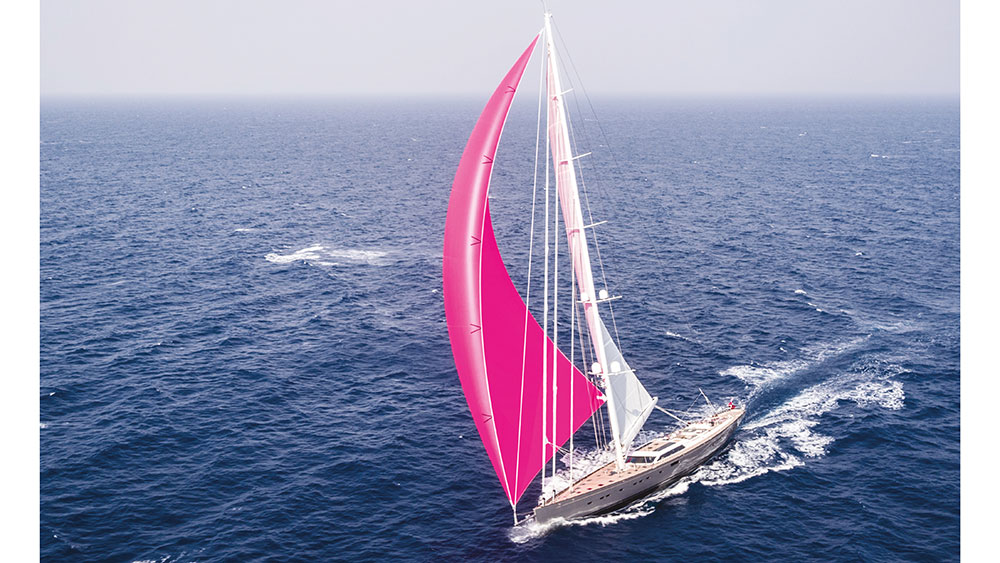 It can sometimes be difficult to stand out in a sea of superyachts, but there’s no mistaking the performance racing yacht Pink Gin VI. With her hot-pink spinnaker that screams I’m the one and only, the world’s largest all-carbon-fiber sloop is actually one of a kind, both inside and out.

The Pink Gin name, carried forward by owner Professor Hans Georg Näder since his first boat in the mid-80s, came about after a night drinking pink-gin cocktails with his then captain Henry Hawkins at Hamburg’s famed Old Fashioned Bar. “Never drink it, it’s the most ugly cocktail you can order at a bar,” Näder told Robb Report, laughing. “But I believe that a boat’s name becomes a brand over time, so I decided to keep it.”

There’s nothing ugly about 174-foot Pink Gin VI. Delivered in 2017 by Baltic Yachts, she is an evolution of Näder’s previous builds, which have developed over time to accommodate his growing family. A sailor since the age of seven, Näder has built several yachts at Baltic (including the most last four Pink Gins) and was so impressed with the Finnish shipyard’s composite engineering that he acquired an 80 percent stake in Baltic in 2013.

“I was keen to show that the yard was capable of producing a superb yacht of this size, but we didn’t set out with for her to be the world’s largest carbon-fiber sloop,” says Näder. “The size grew to accommodate all the required living spaces and the yacht’s advanced engineering.”

Notable features include her silver composite hull, which was built in three parts for easier access and accurate assembly. A 14.7-foot torpedo-style lifting bulb keel can extend to 23 feet beneath the yacht’s hull when the yacht is at anchor, to counterbalance the 223-foot-high Rondal mast (think pendulum effect).

The extensive cockpit, which is split into separate dining, helm and seating areas, is illuminated by two hand-blown Murano glass chandeliers that hang from the boom. These custom chandeliers are designed to fold down when the yacht is sailing.

This side hatch drops from the master stateroom to rest a foot above the water, providing the owner with instant oceanside access and privacy.  Fraser Yachts

Other unique features include opening balconies along the hullsides, one attached to the master suite, giving Näder a breakfast porch or a way to be just a foot above the water in privacy. “Side access is unique on a sailing yacht and has proved very useful as an easy way to board the yacht from a tender, as well as a place to relax,” he says.

The exterior design is by Rolf Vrolijk, better known for his role in helping team Alinghi to twice win the prestigious America’s Cup in 2003 and 2007. Not surprisingly, Pink Gin VI is a regular participant in superyacht sailing regattas. The St. Barths Bucket and the Rolex Cup in Porto Cervo are two of Näder’s favorites. Yet, the yacht was designed to be as much of a world cruiser as it is a racer. Memorable cruising grounds include Sardinia, the French West Indies, and Ilhabela, an archipelago off the southeast coast of Brazil.

Näder’s love of travel is reflected in the “eclectic but comfortable” interior by British studio Design Unlimited, unlike anything else on the water. For the owner, the mauve, self-playing piano in the main salon evokes happy memories of sundowners in Porto Cervo. The salon table by Polish artist Marcin Rusak finds flower petals encapsulated in resin and set within a brass frame. Wood paneling artwork by Roberto Diago creates a feature wall in the master suite, while statement works of art by contemporary sculptor and illustrator Roberto Fabelo, both from Cuba, adorn the corridors.

The mauve-colored player piano is only one item in Pink Gin VI’s unusual collection, ranging from paintings of oversized koi prints to a table made from 7,000-year-old bog oak, to dozens of other pieces that create an elegant interior.  Fraser Yachts

“At the inception stage we came across the idea of using 7,000-year-old bog oak wood as a feature and this runs throughout the yacht, from the capping rails outside through the upper salon table and even to the sharp keys on the piano. Such little details are what make the interior so special,” says Näder. “The day-head wallpaper features a hand-embroidered koi carp design which wraps around the ceiling and shows the underbellies of the fish. Even the bulkhead which houses the lifting keel is designed to look like the spine of a book.”

In 2019, Näder took delivery of Pink Shadow, a Damen-built 150-foot support vessel, thought to be the first-ever shadow vessel for a sailing yacht. Since November it has clocked 17,000 miles cruising around Uruguay, Brazil and Greece, along with the mothership. Pink Shadow features custom artwork on the hull starboard, or “yacht tattoo” has Näder calls it, carried out by his close artist friend Ann-Kathrin Otto.

“We saw how well shadow vessels worked for bigger motor yachts and wanted the same thing. Since taking delivery we’ve received a lot of interest from other sailing yacht owners who love the idea because you have to carry so much equipment on a sailing yacht. To have a shadow boat that you can unload toys, spare parts, diving equipment, etc., onto makes a lot of sense performance-wise.”

The hand-blown Murano chandeliers give the upper deck table beautiful soft light for al-fresco dinners, and then compress to be stowed during the day’s sail.  Fraser Yachts

Despite describing his custom-built sloop as “the best sailing yacht I have ever been on,” serial builder Näder already has Pink Gin VII in his sights. Like the younger sister, this yacht promises to be unique in the superyacht world.

As the third-generation owner of Ottobock, a German orthopedics technology company that creates advanced prosthetics, Näder is used to pushing boundaries. “What we have experienced in biotech—and what will also be a big part of my next yacht project—is a drive towards sustainability,” he says. “The use of solar panels, electrical drives, water-cleaning systems and fully sustainable materials, such as flax instead of carbon fiber, are all key topics. It’s an exciting time for new builds.”

Pink Gin VI is listed for sale with Fraser Yachts for approximately $53 million. Check out some other images of this exceptional sailing vessel.