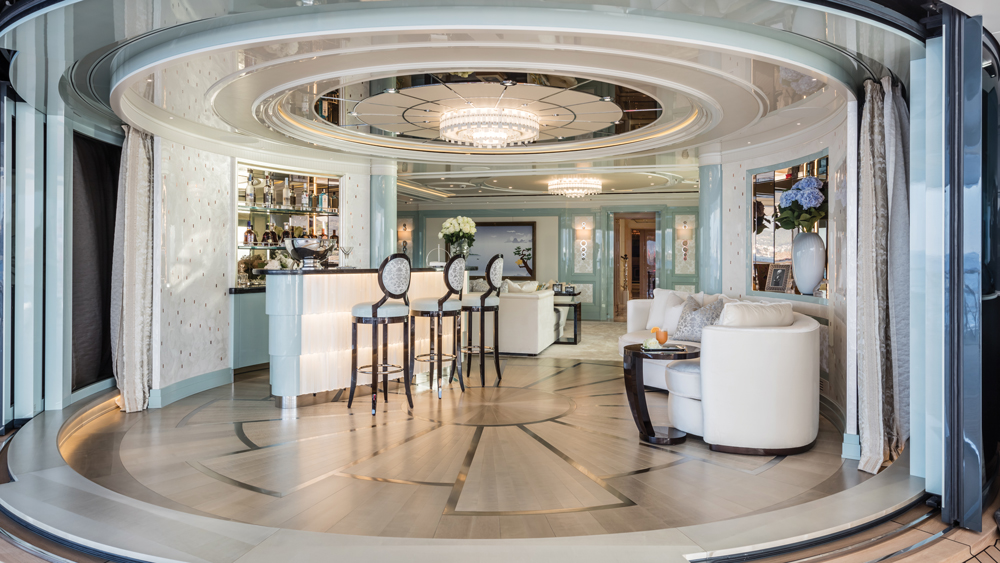 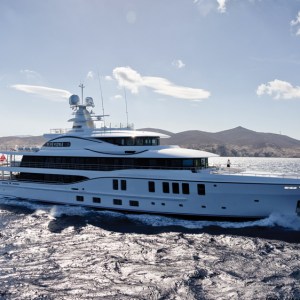 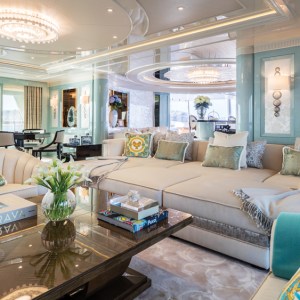 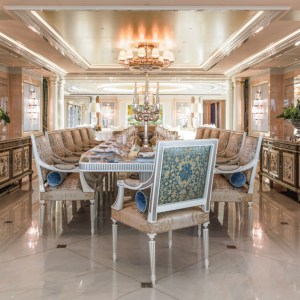 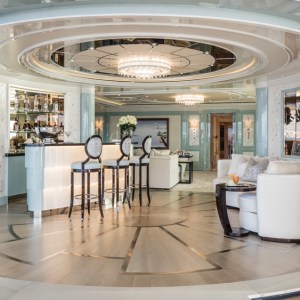 According to Renaissance legend, etched into the ancient Pillars of Hercules—the rocky promontories that mark the Straits of Gibraltar—were the Latin words ne plus ultra, or “nothing farther beyond,” delineating the known realm from the unknown. The phrase became both a warning for sailors and a dare for the brave and ambitious who desired to voyage past those ledges. Over time, the phrase became synonymous with ultimate success and achievement, making Plvs Vltra an apt moniker for the new yacht built by Amels of Holland. The vessel’s owners hoped to make it the ultimate residence at sea, so they called in the experts at Winch Design in London to oversee the interiors. “The owners wanted a full-time residence, not a holiday boat,” says the firm’s founder, Andrew Winch. “That informed every aspect of the design.”

Their guiding inspiration was the airy, sun-drenched, blue-and-yellow interiors seen in lavish resorts along the French and Italian Rivieras. “If you take a look at some of the hotels in the South of France—such as the Hôtel du Cap—they are classical and they are about wonderful sea views with very light interiors,” Winch says.

To achieve a homey feeling, Winch’s Greig Jolly and the design team moved wherever possible away from fixed furnishings and decor—which are typical of yacht interiors. “We tried to keep the furniture eclectic,” Jolly says, “avoiding things being too similar. We wanted to give the feeling of pieces collected over time and make them seem individual.” They sourced furnishings from Italian and French suppliers or asked their own team to craft custom pieces using fabrics from Rubelli, Pozzoli, Armani/Casa, and Versace. They also experimented with bleaching and unusual staining on the curly-maple veneers used throughout the rooms.

Lighting was another point of distinction between this residential-minded design and more typical yacht interiors. “We have never been asked before to do chandeliers that appear to be free-hanging,” says Winch. “If you go back to Victorian yachts, they would have free-hanging chandeliers. But here you can’t afford a rattle, something to be tinkling or breaking.” As a solution, they affixed tiny metal pins to the hundreds of individual crystal droplets used in the lights in the main and dining saloons. Winch penned the designs and brought in Czech crystal manufacturer Preciosa to create the original chandeliers.

Another unique feature aboard this yacht—which accommodates 12 guests and family members as well as a crew of 19—was the design of the beach club located amidships rather than on the aft lower deck (leaving that space clear for garaging two tenders and other toys). This approximately 800-square-foot fold-down platform is equipped with an outdoor shower and a ladder for climbing aboard after dips in the sea. The spa is a feature the family was passionate about, as they often spend as much as 4 or 5 hours per day there during a sail. The space includes a central whirlpool, salon, massage room, hammam, bar, and sauna. Above the Jacuzzi hangs an artwork of gilded porcelain shells by Valéria Nascimento. A glass elevator whisks the owners from the spa up to their private suite. A side-boarding staircase from the main deck reaches down to the beach club, enabling children to spend the whole day outdoors, running between the aft main-deck swimming pool and the beach club. 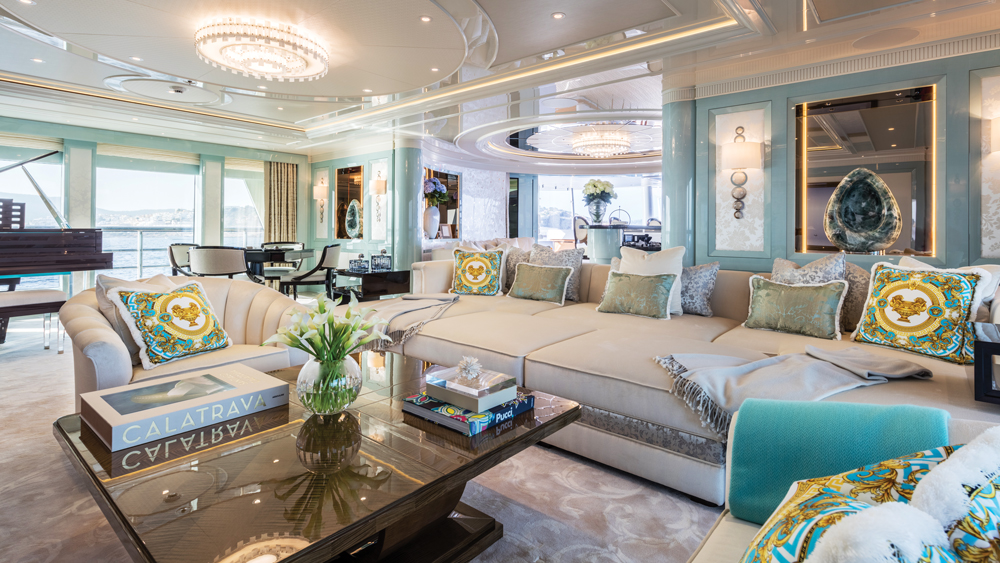 The main entrance to the interior is through a starboard door, leading into a circular lobby adorned with a mosaic artwork made with slivers of six different marbles by Magma in Sicily and designed by the Winch team. A remarkable 21 types of marble were used throughout the vessel to create veined-stone variations that lend an air of natural elegance. The lobby opens to the main saloon, where dramatic pillars were handlaid with Moon gold leaf, giving them a metallic iridescence. Ivory velvet upholstery by Pozzoli adorns the sofas, while bleached curly-maple panels line the walls. The silk-and-wool carpet here, as well as in several of the other rooms, was a bespoke collaboration between Winch Design and Tai Ping.

Also on this level are the galley and dining saloon. In the dining area, Winch finished the traditional French chairs from Paris-based Rinck with a special lacquer and gilt details, upholstering the furniture in Italian silk by Rubelli. The ceiling panels are covered in faux-ostrich embossed leather, and the dining room’s ceiling features the same gold leaf used in the main saloon. “The owners are wine collectors,” Jolly says, “so we installed two huge wine fridges—one for white and one for red, port and starboard. It’s quite unique on a yacht to have such a substantial collection.” Winch also created a custom table from several different woods and placed it beneath the seemingly free-hanging Preciosa light fixture. Two VIP guest rooms with marble en suites also occupy the main deck.

One level up, the owners’ deck provides commanding sea views from every vantage. The relaxed private lounge has blue-stained sycamore paneling and low-slung seating in front of a concealed cinema screen. In the daytime, light streams through the floor-to-ceiling windows along both sides. The lounge also houses a limited-edition Parallèle piano by Hilton McConnico and, further aft, a backlit rock-crystal bar. A secluded dining table for romantic dinners occupies the rear deck.

The master-bedroom suite, which has direct access to the foredeck, stretches across the width of the yacht. The palette of greens, metallics, and neutrals is mirrored in the Rubelli curtains and the custom rug. A hand-painted silk wall covering, sketched by Winch and produced by Fromental, pictures birds on a blossoming tree. Decadent his-and-her en suites feature sand-etched glass panels crafted in Germany that enclose spacious showers, with vanities fronted by sun-catching rock crystal.

The one room that diverges from the airy hues seen throughout the boat is the owners’ office. “It’s a powerful space,” says Jolly: “very decorative, with gilding and red fabrics.” The dark room strikes a serious note thanks to its black-stained Newood, red-lacquer cabinet (a vodka fridge is hidden inside), and desk with gilt detailing and an oxblood-leather surface.

The top two decks—the bridge and the sundeck—make the most of their views and offer more intimate gathering spaces for the whole family. On the bridge deck, a gym filled with top-of-the-line Technogym equipment leads to an outdoor cinema with a drop-down screen for movie nights. The sprawling aft deck also doubles as a touch-and-go helipad. Perhaps the most cinematic spot aboard the yacht, however, is the whirlpool on the sundeck, where unobstructed views of the rising or setting sun and the panoply of stars make one feel the magnitude of venturing farther beyond.