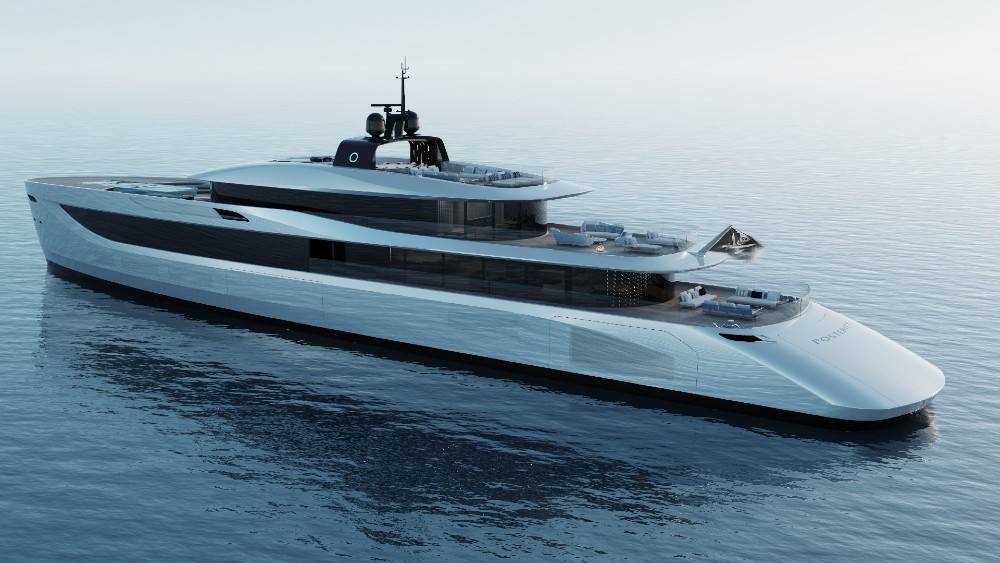 Most superyacht concepts push boundaries, but 233-foot Posterity takes it a step farther by entirely erasing boundaries. Glass bulwarks, large open-plan spaces, floating drop-down balconies and the absence of a hard top create a design that flows inside and out, vertically and horizontally, giving a streamlined and minimalist effect.

Jay Aberdoni, who was the senior designer at Alberto Mancini Yacht Design before striking out independently, breaks away from tradition by eliminating walls and small private spaces in favor of far-reaching views and room to breathe.

“Most yachts are made up of lots of spaces, such as the salon, the dining area, the cinema, etc., which means even when you’re on a 260-foot yacht, it doesn’t feel like a large boat,” Aberdoni told Robb Report. “I wanted to replace that with huge sociable spaces that connect to one another without partitions.”

This one-of-a-kind glass-encased library has views of the sky above.  Courtesy Jay Aberdoni

The main-deck salon and dining area occupy one large space. The salon links to the lower-deck beach club via a spiral staircase that descends to a double-height, curved glass-encased library. A dramatic lighting feature hangs from the ceiling as though, as Aberdoni says, it’s “raining stars.” Fold-down side doors in the beach club and a drop-down transom create a floating resort vibe with a sea breeze. Furniture is minimal, with only sofas, a coffee table and sun loungers to distract from the wide vistas.

“When standing in the library, the sky is visible from above and all around you,” he says. “I’ve kept the glass bulwarks to the stern as low as possible, so that guests can really experience their surroundings.”

The lower deck also includes a gym, sauna and tender garage, where toys and tenders are easily deployed via side hatches. Guests also board the yacht via side doors, with lobbies on the lower and main deck. The upper deck is divided between the owner’s suite aft and the bridge forward. Glass panels in the library, main salon and owner’s suite fully retract to create vast open spaces or remain closed for a quiet and air-conditioned environment.

The aft quarter of the yacht is unusually open, with sun protection, and access to the water.  Courtesy Jay Aberdoni

Glass also features on the dramatic upper deck pool which, at one end, slopes to mimic waves lapping a beach, and on the other is framed by glass. A second pool is located on the sun deck.

“I think lines and surfaces complicate design,” says Aberdoni. “I prefer to work with shadows and reflections, using glass to gift an unobstructed view wherever you are on the yacht.”

Aberdoni spent five years at British studio Ker Yacht Design & Engineering, before taking up the role of senior yacht designer at Barcelona-based studio Lobanov Design in 2017. It was here that he learned to push creativity and design beyond boundaries. For the past two years at Alberto Mancini Yacht Design, he worked across designs for Mangusta, Azimut and Tankoa’s 250-foot Apache, focusing on ergonomics to enhance guests’ onboard experience.

The main suite is like a glass cocoon, connecting to an outside deck for a touchpoint with the ocean.  Courtesy Jay Aberdoni

“A lot of designers are scared to use an area of a yacht for something new, because space is at a premium,” he says. “Not many people would take 16 feet off the main deck to create a balcony that descends to a beach club, but it’s the kind of detail that makes a boat special. It’s the difference between not just looking good but also allowing guests to enjoy being there.”

Aberdoni has also reduced the number of decks typically found on a yacht of this size. The bridge deck and owner’s deck—with an office, private lounge, bedroom and en suite that leads out to a private terrace—are merged to create a low volume, tri-deck yacht with a slimline profile. The absence of a hard top (to leave the sky in plain view) is mitigated by a solid arch fitted with an electric, retractable sun awning.

A tiered exterior with an open skybridge, with a large al-fresco dining table.  Courtesy Jay Aberdini

“I think we’re facing a generational change right now, both with owners and designers,” says Aberdoni. “We young designers need to modernize the industry to be brave and more in tune with a new generation and their changing needs.”

It’s a thought that is reflected in his first yacht concept, both in design and name—a concept he hopes that will not only attain posterity but a client.