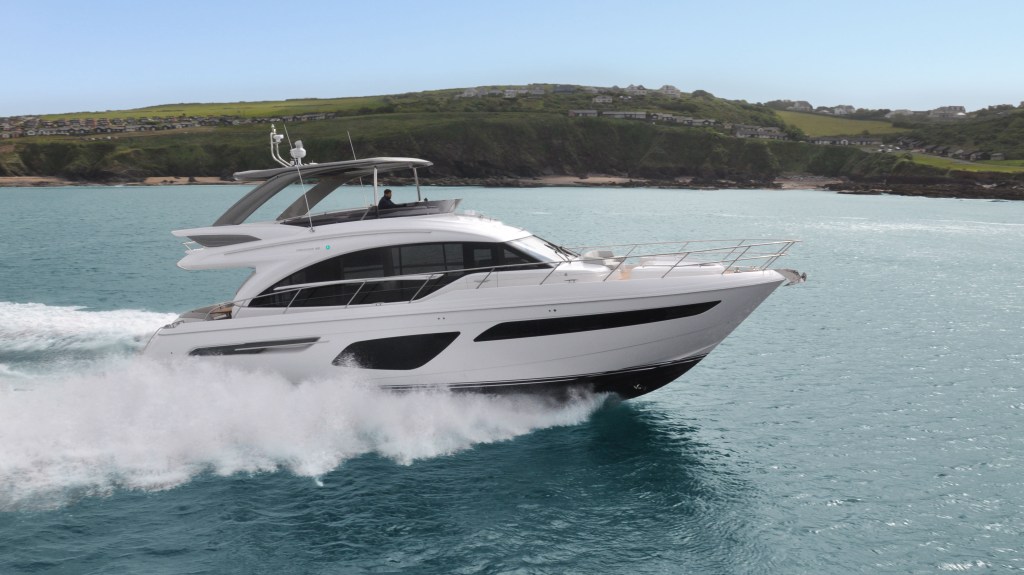 British yacht builder Princess launched its new 62 in late May, and will be introducing the Princess 55 at the Southampton Boat Show in September. The two flybridge models bear a striking family resemblance, with newly designed windshields, large, oblong picture windows in the hull sides for the master suites, and bridges positioned toward the stern, giving the boats a much sportier profile than most traditional flybridge motor yachts.

Traditionally, Princess has taken a more understated approach to design than its U.K. and Italian competitors, but the Princess Design Studio created bold exteriors for the two newest yacht models. The 62’s bridge, for instance, features a tall hardtop that provides protection for the entire area, without injecting any sense of claustrophobia. This bridge feels bigger than its physical size. Near the two-person helm station are a circular seating area, L-shaped lounge center, and an aft sunbed. The bridge could accommodate a dozen guests. The bow also has a multi-seat social area, with twin sunbeds forward and a three-person lounge, separated by a small walkway.

The Design Studio also used the shape of the superstructure to maximize the interior headroom, which, along with the open-plan layout and windows (floor-to-ceiling at some points), gives the area a larger-yacht feel. The aft-galley configuration is the ideal way to connect to the rear cockpit, especially since a counter extends from the galley through the bulkhead and out into the cockpit. Princess has long been known for its impeccable fit and finish, and the woodwork and handcrafted furniture on the new 62 are beautiful. The two helm seats are white leather with perfect stitching. The Design Studio did a masterful job of combining the walnut, teak, glass, leather, suede, bronze-tinted mirrors, stainless inserts, and Japanese wallpapers without clashing. It’s a subtle, modern interior.

Belowdecks, the three staterooms have the same levels of finish. All have en-suite bathrooms, with seaside views, thanks to their respective picture windows. A fourth stateroom for two crew or guests at the stern is optional. The 62 has a projected top speed of 34 knots, with twin 1,000 hp Caterpillar C12.9 engines.

The soon-to-be-launched Princess 55, which replaces the current 56, is probably an even more concrete example of the builder’s exciting new look. The larger windshields, asymmetric shapes of the hull-side windows, and jaunty arch on the flybridge show just how much Princess has pushed its design on this yacht. Teak covers the exterior decks, even up on the flybridge, with its aft seating and dining area, wet bar, optional electric barbecue, and helm seats and lounge.

The open-plan saloon layout is similar to the 62, with its finished walnut walls and furniture, recessed LED lighting, and innovative designs like a coffee table that converts into a dining table. The galley is also aft, connected to the cockpit through the sliding glass door. The lower helm area is a departure for Princess designers, employing clean, streamlined surfaces and an all-glass console that blends in with the rest of the saloon.

The 55 has a three-stateroom configuration on the lower deck. The full-beam master suite amidships has an unusually large bathroom for a 55-footer, with hanging locker and lounge next to the large picture windows. Forward, the VIP stateroom also offers generous space with access to a second large bathroom and two sets of hanging lockers. The third cabin is a twin with the option of becoming a double. Owners can also add a fourth cabin at the stern as a captain’s quarters. The new Princess 55 can be powered by either twin 800 hp Volvo D13 engines or twin 800 hp i6 MANs, both offering a top speed of 33 knots. Besides the Southampton Boat Show, the new faces of Princess will be at the Cannes Yachting Festival.