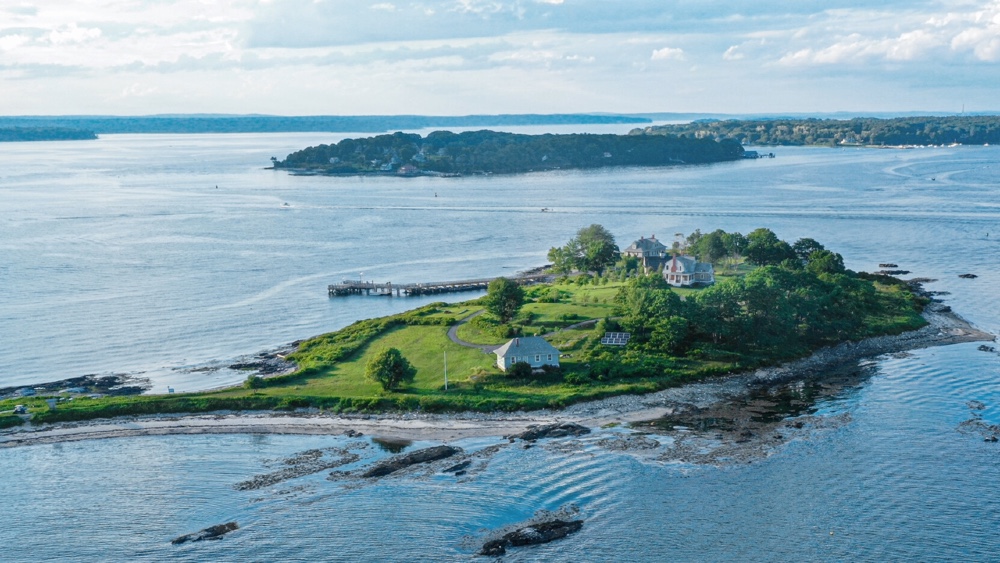 Maine is best known for large lobsters, a rocky coastline and excellent sailing, but thanks to proprietor Noah Gordon, a once-inaccessible private island with 4,000 feet of shorefront and sparkling views of Portland’s skyline can now be added to the area’s list of top attractions.

During this Covid-19 summer, House Island has transitioned from a summer retreat for the rich and famous to a safe haven for superyacht owners and charter guests. Gordon, a tech entrepreneur, purchased the northern half of the 26-acre island in Portland, Maine in October 2019. Located in Casco Bay, just a six-minute boat ride from shore, House Island offers an undeveloped landscape with 360-degree wraparound views, multiple beaches and a rich tapestry of American history.

The landmass became known as House Island more than 400 years ago, recognized by ships’ captains as “the house on the Island to your starboard” upon entering Portland Harbor, Gordon told Robb Report.

Because it’s isolated, the island has become a superyacht stopover.  Kirby Stenger

At one point, it was also known as the ‘Ellis Island of the North’ when immigrants from Europe and the Mediterranean were processed by the US government from 1907 to 1937. In the 1950s, the island was privately purchased by the Cushing family, and has since been an elusive area of intrigue to local inhabitants.

“No one in this area knows much about House Island, it’s a hidden gem,” Gordon said. “I grew up a few miles from here and I’d never been on the Island before now because it’s been privately owned all this time.”

In 2014, the Cushing family sold the island off in two halves. The south side, now owned by Travis Bullard and Stefan Scarks of Fortland LLC, contains the only privately owned 19th-century fort in America.

Pre-covid-19, House Island was a resort for the rich and famous, often used to host private weddings.  Eric McAllister Photography

Gordon’s 12 acres on the north side contain the original immigration intake station which has now been reimagined as a luxury five-bedroom residence called Cappy’s Lodge, along with two other properties. Pre-Covid, Gordon was developing the north side of the island as a top-tier event space for people like Fox News personality Jeanine Pirro, whose daughter Cristi married Zak Schwarzman there in 2017.

With three helicopter take-off and landing zones and deep-water anchorages for yachts, however, the onus is now on its suitability as a safe haven for superyacht owners.

“The island is surrounded by water up to 50 feet in depth,” says Gordon, “so any size boat, including an aircraft carrier, could actually anchor right in front of the Island.”

The island has attracted superyachts like “Felix,” which anchors offshore and drops its guests on the island for the day.  Kirby Stenger

Island activities include sailing, kayaking, deep-sea fishing and for those willing to brave the cool waters of Casco Bay, there’s swimming off the island’s five private beaches. Ospreys and bald eagles glide at eye level along the island’s bluffs, providing a treat for bird watchers, too.

“House Island is the only thing like that available in Maine,” Capt. Gareth Sheppard of superyacht Felix told Robb Report. “We spent a day touring and exploring the area. The fort was a highlight for us. And if you had an event organized with a DJ and lobster bake, having a party on that Island would be awesome.”