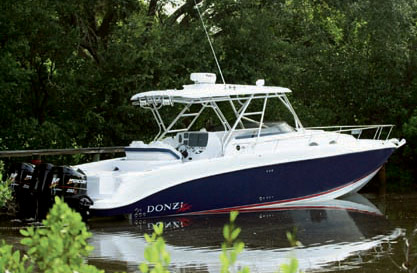 A pair of 1,400-hp Sterling engines will give the Outerlimits 47 GTX a top speed of 150 mph, while the company’s new construction method involving an epoxy resin will provide the boat with a ride that is smoother than its predecessors’. Paul Fiore, Outerlimits’ vice president of sales, anticipates that the new GTX will appeal to owners of the company’s smaller or less powerful models. “It’s the next move up,” he says. “We’ll also be impacting high-end customers in other brands who can’t get what they want out of their boats, and some people with catamarans who want something a little more stable and forgiving to run. This will still have rough-water capabilities.”

The 47, which will be equipped with a bolt-on canopy top, will have a base price of approximately $950,000, and Fiore expects the price to approach $1 million with paint and graphics. The boat is tentatively scheduled for an October or November release, although its debut could be postponed until the Miami International Boat Show in February.

Like its predecessor, the 36-foot Gladiator, Cigarette’s 45 Maximus is designed for everyday use, despite its performance capabilities and intimidating appearance. The Maximus, which will debut at the Fort Lauderdale International Boat Show at the end of October, will likely be powered by a pair of 1,050-hp engines. Although it will not have a cabin, and the new triple-step hull will be streamlined, its spacious cockpit will be equipped with seats instead of stand-up bolsters, allowing for pleasure cruising as well as all-out runs. The approximate price of the Maximus is $800,000.

Although the Donzi 38ZF is designed first and foremost for fishing, the 38-foot center-console model will feature triple Mercury 250 XS engines that give the boat a top speed of more than 60 mph. The 38ZF will include two seating areas in the forward cockpit, and belowdecks a full galley, a head with shower, and a full-size V-berth. The Donzi can be equipped with a 15-inch flatscreen TV and a DVD player.