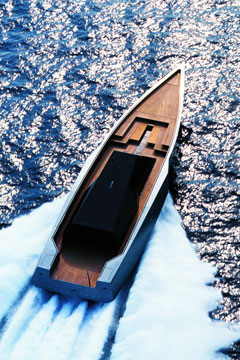 Residents of La Spezia, a navy town on the western coast of northern Italy, have become accustomed to seeing daunting military vessels pass through their waters. Last spring, however, even the jaws of the most jaded dropped at the sight of a 118-foot gunmetal apparition that roared through the Gulf of Genoa at 65 mph. “It’s the ultimate show-off weapon,” says Luca Bassani, president of Wally Yachts. “It’s so unique and so exclusive. Whenever you come into a harbor, everybody will shut down and just look at it.”

It is the 118 WallyPower, which began sea trials off La Spezia in April and completed them in July. Orders are now being taken for the vessel, which will cost approximately $24.14 million. While many of today’s 100-foot-plus yachts are designed with soft lines and built to cruise at leisurely speeds, the WallyPower appears as crisp as a freshly pressed shirt, flaunting lines as sharp as swords, and its three gas turbines propel the yacht to a top speed of 70 mph. “At this moment, I’m not aware of anything like it,” says Giuseppe Marchetti, a member of the WallyPower technical team.

Bassani insists that the boat’s futuristic form is purely a product of its intended function: fast, all-out performance. It just so happens that the radical styling achieved this goal. “It’s for the guys who love power and speed,” Bassani says. “They like this kind of feeling, which is a strong, very masculine feeling. They could easily love something with these kinds of looks, and they usually do.”

The idea for the WallyPower was born three years ago at Bassani’s home in Portofino, Italy, where he was hosting a dinner for a client who wanted a boat that was at least 35 meters (115.5 feet), would reach at least 60 knots (69 mph), and carry eight guests. The client complained that most superyachts, while undeniably luxurious, travel from port to port at a turtle’s pace.

Bassani spent the next day at his house, conceptualizing the layout of the boat. The seed of the WallyPower was planted, appropriately, in Bassani’s garden. Using flowers and bushes as landmarks, he envisioned a full-scale version of the 118-footer. Although the client declined to commission the boat, Bassani launched the project anyway.

The company concluded that gas turbines would be the appropriate beasts to power the boat to its target top speed. Wally equipped the yacht with three 5,600-hp turbines and designed alternative models that could be fitted with two turbines (with a price tag of $19.56 million) or two 370-hp diesel engines ($14.95 million).

While gas turbines can rocket a boat up to speed, they have several drawbacks. Turbines feed upon massive amounts of air to power the engines’ revolutions, and traditional boat design typically does not take this requirement into consideration. Also, turbines generate excessive heat in a boat’s engine room, which can lead to potentially dangerous situations. Wally’s engineers were stumped, until they looked skyward for inspiration. “When we realized the amount of air the turbines were going to need in the engine room, we immediately had to take jet fighters into consideration,” says Bassani.

The company designed two inlets, similar to those on military aircraft, for placement on each side of the boat. Air, funneled through the inlets, would be sucked into the engines, allowing for higher revolutions and greater power. Also, the air from the inlets would cool the engine room and prevent damage to the boat’s redundancy systems. To guarantee that the inlets would work, Wally brought a scale mock-up to the ultimate testing ground: the Ferrari wind tunnel in Maranello. There, the 10-foot model underwent tests similar to the ones endured by the Italian automaker’s championship Formula One machines.

With the engine dilemma solved, the question of hull design remained. After much testing, Wally settled on a sharp, V-shaped bow that would enable the WallyPower to withstand high-speed, deepwater travel. The rigidity of the hull was just as important as the angle of the bow. Wally concluded that a hull made of polyester resin would best absorb the force of the water. For the deck, Wally designed a sandwich of carbon fiber skins with a PVC core, which dampens the noise and vibrations in the boat’s living quarters. The cockpit was encased in a unique glass and carbon fiber structure.

Although the WallyPower was designed primarily for performance, it also had to provide its passengers with comfort. The design team opted for simple elegance instead of opulence to mirror the sleek, minimalist appearance of the exterior. Light floods through the cockpit, bouncing off the blacks and whites of the saloon’s furniture and the teak of the floors. “The outside reflects what’s inside. It’s very simple,” says Marchetti. “The beauty of this is in the simplicity of the shapes. There is nothing elaborate. It’s very fair and very plain.”

All of the designs, the planning, the tank tests, and the wind-tunnel sessions would become irrelevant if the boat did not perform during its sea trials. Understandably, nerves ran high before the initial Gulf of Genoa test last April. But as the boat gathered speed, Wally’s designers, technicians, and executives smiled. Wally’s chief engineer approved 85 percent maximum power, and the gas turbines blasted the WallyPower to 65 mph. In the engine room, the air that was funneled through the inlets kept the temperature at 100 degrees, an acceptable level for a boat performing at such speeds. Vibrations were minimal, and the saloon was quiet enough for a conversation.

“The ship is absolutely stable,” says Marchetti. “It is absolutely smooth through the waves, thanks to the special design of the bow. It is very comfortable. What is wonderful in life are simple things. When you look at this boat, you see simplicity. You are amazed at how simple lines can give you a strong feeling. This ship is safe. It gives a sense of power. You see that it’s a powerful, powerful machine.”