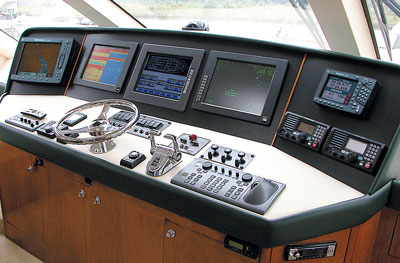 The Hatteras 77 Convertible, which will debut in October at the Fort Lauderdale International Boat Show, would be a poor choice to replace Quint’s boat, Orca, in a Jawsremake. With the Hatteras, the film would lack any suspense, for the shark hunters would not need a bigger boat. In fact, they could not have a bigger one, at least not a larger American-made production sportfisher.

The fiberglass-hull boat, which follows the 2005 introduction of Hatteras’ 64 Convertible (honored in Robb Report’s Best of the Best issue this year), will measure 76 feet, 10 inches long. It will have a 22-foot beam and, despite the boat’s size, a draft of only 5 feet, 3 inches—compared to 6 feet or more for other large boats in its class—making it suitable for shallow waters such as those in the Caribbean. The 77 will achieve a range of about 690 miles at its cruising speed of about 35 mph.

The spacious salon will be furnished with an L-shaped sofa and a club chair and will offer plenty of storage capacity, while the lower deck will house four staterooms and crew quarters. Owners will be able to customize the master stateroom, located amidships, so that it includes a his-and-her head arrangement, instead of crew quarters, and an office or lounge area in lieu of the foyer entrance. The bridge will include forward-facing seating for the captain and as many as four guests, and an audiovisual entertainment system will be accessible throughout the boat. A computerized monitor with touchscreen technology will track engine performance, tank levels, and other systems.