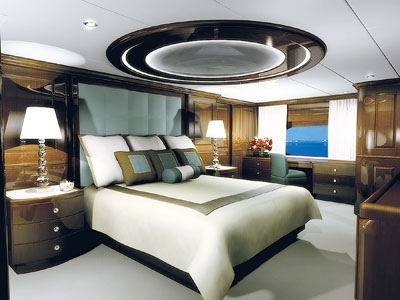 When grammy-nominated songwriter Denise Rich takes possession of Lady Joy II, her new 157-foot Christensen, in May of next year, she will be cruising aboard hull number 31 of a series that offers unusually rapid delivery times for superyachts. Christensen has been constructing custom vessels at its shipyard in Vancouver, Wash., since 1983, but in 2002 it began building boats in its 157’ Custom Series on spec, one hull after the next, without waiting for buyers.

This approach expedited delivery time for Rich, who agreed to purchase Lady Joy II last winter, about a year after its construction had begun. “It’s a great way to build yachts,” says Christensen president Joe Foggia. “We’re able to put proven engineering systems into a yacht instead of leaving the boat in a shipyard while we wait for the contract specs.”

The owners of another Christensen 157-footer, Savoy, which will be launched this October, are taking the helm only eight months after ordering the yacht. Conversely, the owners of the 157-foot Barchetta, which also will debut in October, at the Fort Lauderdale International Boat Show, entered the process just a few months after construction had begun in 2004. “The earlier the owners get into a project, the more leeway we have for customizing it,” says Foggia.

Rich had a music studio, with a baby grand, built into the skybridge. The yacht also will have dance floors, a multimedia center, six staterooms, a fitness center, an elevator, quarters for as many as 10 crew, and a cherry interior that will complement Rich’s art collection.

The yacht has a lightweight composite hull that was cured inside a vacuum to improve structural integrity, and the bow features a broad end to stabilize the ride. Two MTU 12V 4000 series engines will drive the vessel to a maximum of 21 mph and deliver a range of about 5,180 miles at a cruising speed of 14 mph.