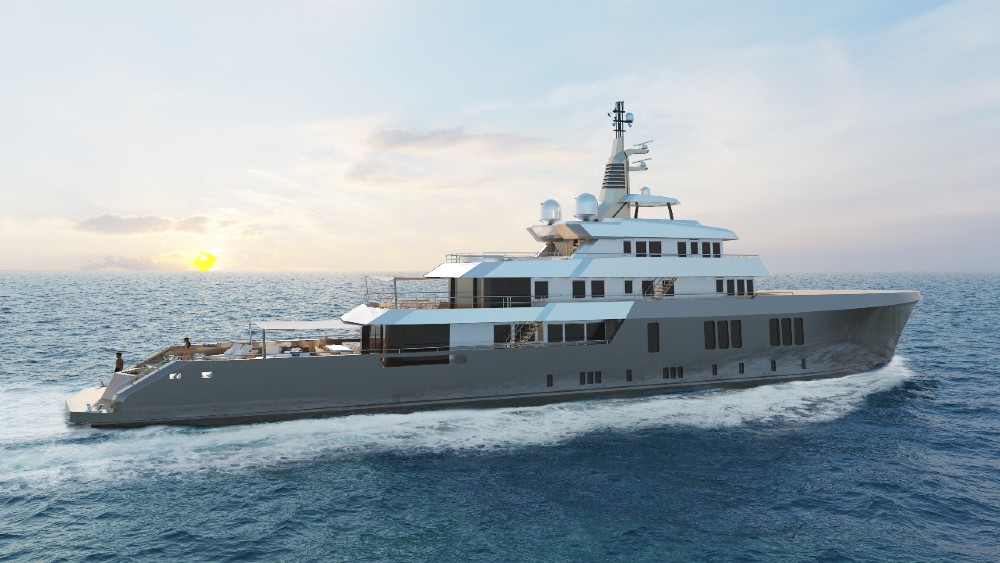 Few boats live up to their names like Project Phoenix. Like the mythical bird, this superyacht is rising from the ashes of its humble, commercial-vessel past and could soon become a modern explorer yacht. Extreme refits like these are becoming more attractive to owners as many shipyards are now backlogged with new builds for the next three to four years.

Originally built by EJ Smit & Zoon in 1968 to lay cables in the North Sea, the vessel is actually ready for its second conversion. In the 1990s, it became the 173-foot Sir Arthur J, a classic but terribly dated superyacht that served several owners for nearly 30 years. Now, having been stripped back to a bare hull at the ICT shipyard in Turkey, the Phoenix concept is waiting for the right owner for what could be yachting’s most extreme makeover.

The newly imagined exterior and interior by Omega Architects is nothing like Sir Arthur J’s old look (below), but more like forward-looking explorer designs. Yacht firm Ocean Independence is presenting the project as a refit opportunity, but one that’s on steroids.

This is Sir Arthur J in its former guise. Project Phoenix’s design is an entirely different sea creature.  Courtesy of Omega Architects

“Since she was built for laying cable in the rough North Sea, she’s stronger than a typical yacht,” Eel Kant, CEO of ICT shipyard, told Robb Report. “Her thick steel hull is well suited to cruising through ice, and she can carry a lot of toys onboard including a submarine in the bow.” What’s also optimal is that a prospective owner could save about a year compared to a new build, thanks to the proven hull.

Phoenix is expected to have an 11,000-nautical mile range, with the option to fully customize the entire yacht. “The renewed engines are already in place, as well as some original machinery, but the vision is to update the boat with the latest equipment to create a modern explorer with a classic hull,” says Kant.

For Omega Architects’ Frank Laupman, Project Phoenix represents the second roll of the dice with this particular vessel. Six years ago, Laupman was approached by the former owners to transform it into a trawler-style yacht. Family challenges sunk those plans and Sir Arthur J fell into disrepair. ICT saw it as an opportunity to refit and rebuild.

With its extra 15 feet of length, the designers added a beach club, large swim platform and pool at the stern to enhance the explorer’s on-board livability.  Courtesy Omega Architects

Two years ago, ICT completed the refit of a John Bannenberg-designed Feadship, which has as much pedigree as any classic yacht around. “That was the start of a deliberate campaign to move into the refit market,” says Kant. “A lot of things are possible when you buy an existing hull like Project Phoenix, but it takes vision. We cleaned the hull up to showcase the huge 850 GT volume and Frank Laupman came up with a design.”

The original canoe stern on Sir Arthur J’s hull was redesigned by Laupman to add a beach club and swim platform. That extended the length to 187 feet. A mid-leaning forward superstructure provides a more conventional explorer profile and frees up room on the aft deck to include a pool and space for a 30-foot tender. The bow has been raised to accommodate two smaller tenders on the foredeck.

“One of the key elements of this build is the time savings it offers an owner,” Peter Hürzeler, managing partner at Ocean Independence, told Robb Report.

A grand piano, formal dining room and ultra-modern lounge could all be elements of the Project Phoenix refit.  Courtesy Omega Architects

Keen to reference Project Phoenix’s heritage while incorporating a modern twist, Laupman has kept the original windows and added a few larger windows on the superstructure. “The boat can carry one extra tender than your typical 175-footer, which will suit owners who like to dock their yacht and explore the coast,” Laupman told Robb Report. “I wanted to give her an evergreen feel. So, she has a classic hull with shell plating to make the bow higher and we designed a new wheelhouse.”

Laupman went all out on the interior design, creating a 27,000-sq. ft. main deck entirely for the owner. That deck includes the owner’s stateroom with a private terrace and large ensuite, along with space for a cinema and private decks on both ends of the boat. There are also five staterooms on the lower deck. Considering it’s an explorer yacht, an optional touch-and-go helipad on the foredeck makes sense. The interior is defined by contrasting elements, including high-gloss veneers beside soft leathers and brass accents, with white and black marble mingling with European oak herringbone flooring.

Hürzeler thinks Phoenix is the ideal solution for a time-challenged owner who wants a customizable build. “Inventory is disappearing,” he says. “A proven platform in Project Phoenix’s size range offers large-yacht comfort, but it’s not so big to keep you out of smaller ports. She’ll do very well in rough weather, with the characteristics for an owner who wants to explore.”

Here are some other images of the yacht after it has risen from the flames.