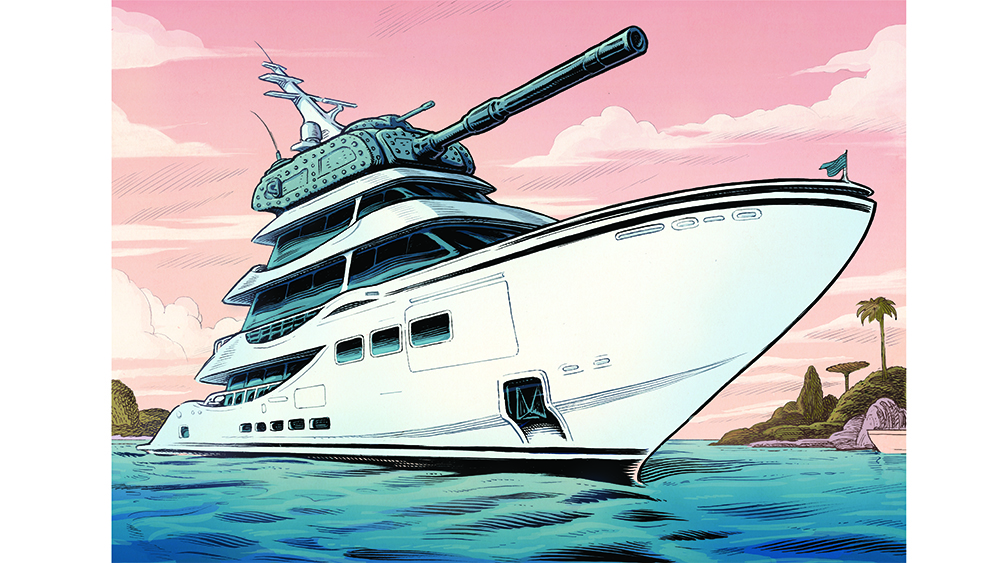 In the yachting world, self-defense has gone on the offensive. Roman Abramovich’s 533-foot Eclipse is rumored to have an antimissile defense system, while the 165-foot Thunder could potentially launch missiles of its own, thanks to Australian builder Oceanfast’s military pedigree. “Its multi-fin stabilization system was designed to keep the deck level for firing projectiles—even in big seas, the boat doesn’t roll,” says former captain Max Burgazli. “Another plus is that nobody spills their drinks.”

Other gigayachts have reportedly incorporated safe rooms, and the current demand for submersibles includes those who consider them potential escape pods. For pleasure cruisers, such high-stress considerations might seem counterintuitive, but yacht owners are increasingly adding security to onboard must-have lists, even on smaller yachts.

If missiles are too extreme, perhaps bulletproofing is the way to go. Bering Yachts is now working with the luxury-vehicle armorer Trasco Bremen GmbH to reinforce its 80- to 180-ft expedition yachts. Armoring your vessel “doesn’t mean you’re going to Somalia,” says Bering CEO Alexei Mikhailov. “Random crime can happen anywhere.”

Bering and Trasco focus on the pilothouse and engine room, both vulnerable points during an attack. “Instead of a panic room, where people wait for help, it makes more sense to protect areas where owners and crew still control the yacht,” says Trasco CEO Sergej Lizun. “They lock themselves in, summon help and head for shore.”

Armoring a yacht can cost from $400,000 to $600,000, depending on the yacht’s size and details. Protected areas include the roof, the door and upgraded glass rated to bulletproof VPAM Level 6, able to withstand repeated rounds from an AK-47. The reinforcements can add up to 10,000 pounds to the boat’s weight, so it makes more sense on an explorer yacht than a planing vessel. And the structure isn’t just a steel box; the armored frame needs to be grenade-proof while still allowing for entry points to accommodate cables, vents and special locks, while the doors and walls overlap to protect from angled shots.

Beyond armored rooms, Mikhailov prescribes a combination of anti-piracy deterrents such as long-range acoustic devices that emit high-pitched noises to repel invaders, a green-light “dazzle” gun to disorient attackers and motion detectors on the decks. “Incident rehearsals” that simulate the yacht being besieged by pirates (or paparazzi) are popular for training crew, especially after something untoward has happened, says Horst Ruetten,

CEO of I.B.S. International Operative Services, a German firm specializing in superyacht security. The company has seen service requests rise 5 to 10 percent each year since 2016. Need more? IBS can also provide sonar for underwater surveillance, anti-drone systems for aerial protection, armed ex-military for questionable voyages or advisement on upcoming builds. Ruetten says client requests for these defensive systems are rare compared to, say, intruder detection systems. “We do a lot more consulting during the build and refit processes for risk analysis and protection concepts,” he says.

One last tip, from Bering’s Mikhailov: If all else fails, reverse the yacht’s stabilizers to try to literally shake attackers off the boat. “It clears the decks fast,” he says. And it’s far cheaper than an antimissile system.