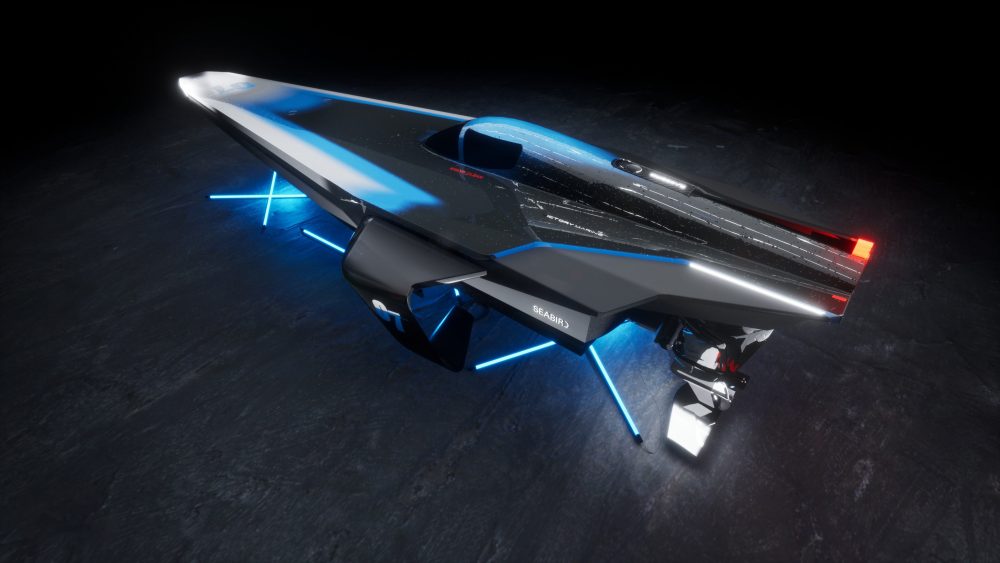 Leave it to two motorsport legends to bring Formula E to the high seas. Alejandro Agag and Rodi Basso recently announced plans to hold the world’s first electric powerboat racing championship in 2023. Now, the duo has unveiled the very vessel that will underpin the nascent E1 series.

Designed in partnership with SeaBird Technologies and Victory Marine, the high-powered 23-footer goes by the name of RaceBird. As the moniker might suggest, it was inspired by birds flying low over the ocean. That’s fitting given that the powerboat is equipped with hydrofoil wings that allow it to rise 1.6 feet above the water and soar at breakneck speeds. This setup is also said to reduce wake and increase efficiency while on the seas.

Crafted predominately from carbon fiber, the powerboat has a fighting weight of 1,764 pounds (800 kg). It sports a single center-mounted propeller and outboard electric motors that promise an exhilarating maximum speed of 50 knots. Of course, the electric vessel flies silently and sustainably sans any emissions, just like our feathered friends of the skies.

To top it off, RaceBird has a sleek silhouette and futuristic aesthetic that wouldn’t look out of place in a Star Wars flick. The enclosed canopy is positioned toward the rear of the vessel similar to a Jedi Starfighter, and the vessel evidently packs a lot of “force.”

RaceBird will be joined by a full flock of fellow racers, too. Engineers from Victory Marine will be building a fleet of race-ready electric powerboats in the upcoming months for the forthcoming E1 Series.

“Now that the design has been fully validated, we’ll begin engineering and manufacturing the boats in preparation for prototype testing and ready for the teams to receive their first delivery,” Brunello Acampora, founder and CEO of Victory Marine, said in a statement.

The E1 Series’ originators both bring long racing résumés. Agag is best known for co-founding Formula E and Extreme E while Basso has been a Formula 1 engineer for the likes of Ferrari and Red Bull Racing. The series is also being backed by Saudi Arabia’s Public Investment Fund, which will help further accelerate preparations for the inaugural season.

Once in full swing, the E1 Series will see up to 12 teams competing on the water in spectacular global locations. The pilots, who are expected to hail from both powerboat racing and auto racing, will tackle tight and technical circuits in speedy electric powerboats capable of reaching up to 50 knots.

As for when the first RaceBird will take flight. It’s currently in production and will be tested on the water soon. A full-scale model is due to debut at the Monaco Yacht Show in September. Keep your eyes on the skies (and seas).