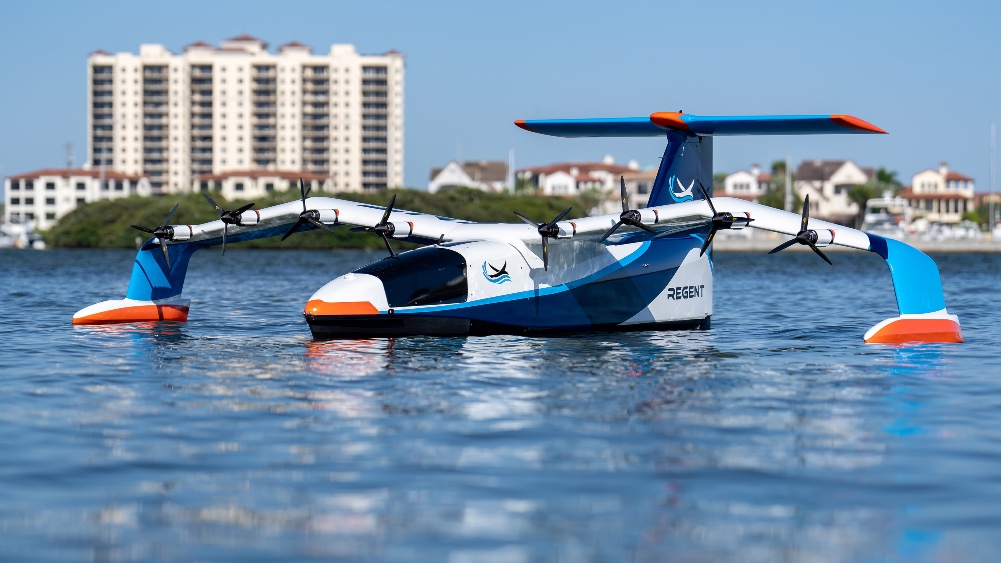 Regent’s hotly anticipated Seaglider is up, up and away.

The US outfit, which unveiled the electric “float, foil, fly” seaplane last year, recently carried out the first series of test flights in a mini Seaglider. The demonstrator craft, which is a quarter-scale model of the full-size prototype expected to launch in 2024, circled over Narragansett Bay in Rhode Island sans harmful emissions. It was also the first craft to take off from a controlled hydrofoil and transition to wing-borne flight, according to Regent.

“This is the next great moment in the history of human transportation,” Regent’s CEO and cofounder Billy Thalheimer said in a statement. “There has not been a new mode of transportation since the helicopter.”

Designed by two aerospace engineers, the fully-fledged Seaglider will have a wingspan of 65 feet (for comparison: the demonstrator had a wingspan of 18 feet). The glider takes off and lands on water the same way a floatplane does, but flies just above the water’s surface instead of 13,000 feet above it. It’s kind of like a hovercraft in that it uses the “ground effect,” or the cushion of air beneath the wings, to stay within a wingspan of the waterline. Starting out, the craft runs on foils at speeds between 20 and 45 mph, before retracting the foils and accelerating to between 145 and 180 mph. That’s six times faster than a conventional ferry.

The Seaglider will eventually serve as a fast commuter (water taxi) between urban centers and coastal areas. The nifty design means it can be used on existing docks without any additional infrastructure. It will also require half of the operating costs of traditional aircraft and generate less noise pollution and fewer emissions.

Regent plans to develop and build more passenger-carrying Seagliders that will reportedly be ready to enter service on coastal routes between major cities across the globe by 2025. The company has already received $7 billion worth of orders, too. Bring on the era of the Seaglider.