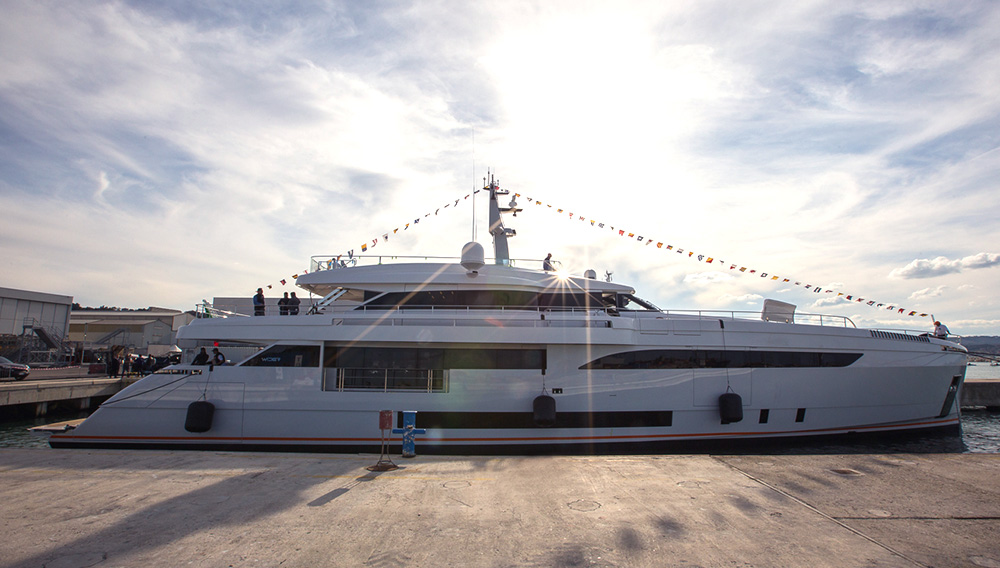 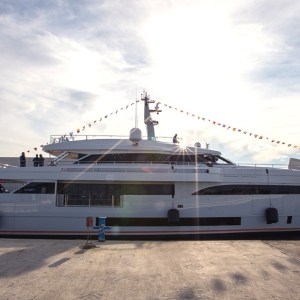 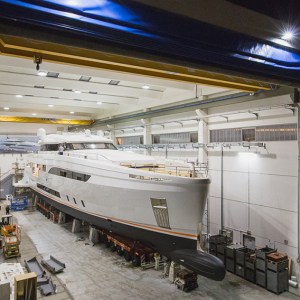 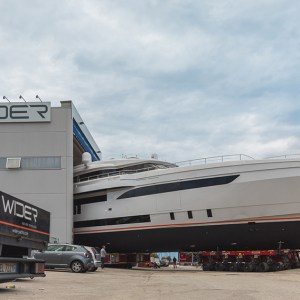 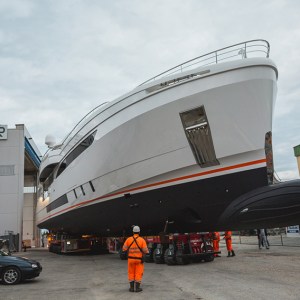 After more than two years of construction, Wider Yachts has launched the approximately $29.5 million Wider 150 superyacht. First announced as a concept yacht in 2011, the all-aluminum ship garnered a steady stream of buzz that finally reached a crescendo when it emerged from the Wider Yachts shipyard in Ancona, Italy, this week on October 21.

The 150-foot ship—the first finished superyacht from 5-year-old Wider Yachts—is making waves in the yachting community due to its unprecedented elongated wings that electronically unfold from the hull, providing additional sitting and lounging areas. The nearly 1,000-square-foot beach club—the largest on a boat of this size—features a saltwater swimming pool (which converts into a garage for the onboard 32-foot tender), sunbeds, a swimming platform, and sundecks accessible when the side wings open. Other highlights include a hidden one-car garage on the bow; a sundeck with a full bar, barbecue, and spa; and a helipad where helicopters can land even when the yacht is in motion.

The Wider 150, which has a range of 3,000 nautical miles at a cruising speed of 13 knots, features an innovative hybrid system, which runs on either lithium polymer batteries paired with a power management system specifically designed by Wider or with four inline, variable-speed diesel generators. When using battery packs in zero-emission mode, Wider 150 can cruise at as little as 5 knots. When using diesel, azimuthal pod propulsion decreases fuel consumption by 30 percent and helps reduce noise and vibration. Further contributing to quieter cruising for guests, the engine room is located in the bow instead of mid-ship.

Inside are modern, minimalist interiors that include an 807-square-foot owner’s suite with a private terrace; a main saloon with floor-to-ceiling glass windows; and an upper deck skylounge with sliding doors that open to an alfresco dining area. (wider-yachts.com)