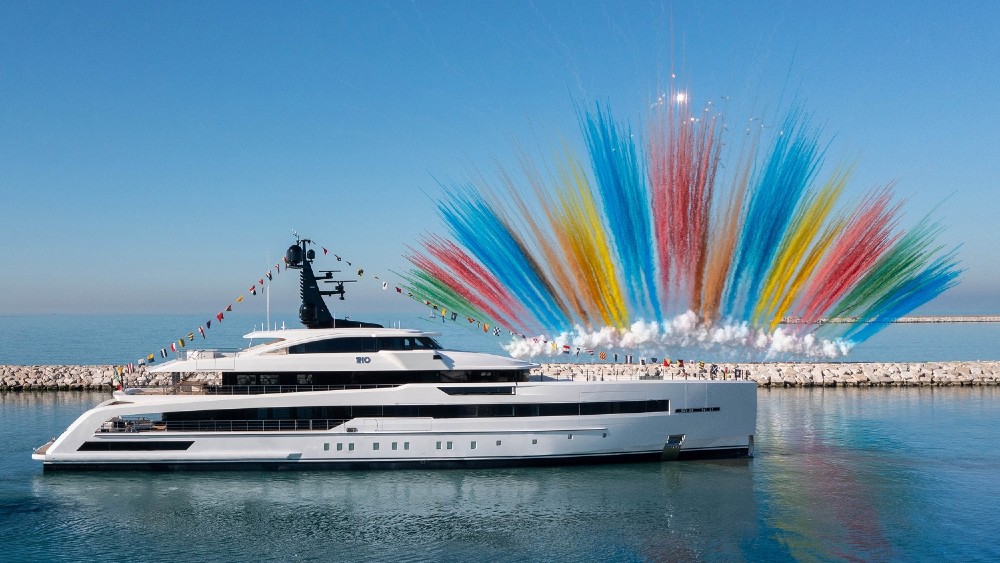 Superyacht launches tend to be private affairs, a celebration of the relationship between owners and the shipyard. Typically, it involves the owners and their families, the executives of the yard and the workers who built it. Depending on the yacht’s size, it can be one of the largest get-togethers on the docks, consummated by the owner breaking a champagne bottle breaking across the bow.

Italian custom builder CRN gave its new 204-footer, named Rio, a welcome worthy of Carnival, complete with fireworks and confetti, as it was launched last week. The bespoke superyacht, named Project C138 during the three-year build process, made its debut at CRN’s Ancona shipyard.

The four-deck yacht, with a 37-foot beam, was designed to accommodate 12 guests across six staterooms. They include a full-beam owner’s suite, two full-beam VIP staterooms—one on the main deck forward and the other on the lower deck—and three more lower-deck suites, including two doubles and a twin. An elevator connects all four decks, which includes a private deck for the owner. The yacht has plenty of glass along its three top decks, along with portholes in the lower deck.

Superyacht launches are celebrations, but Rio’s was more Brazilian Carnival than just breaking a champagne bottle across the bow.  Courtesy CRN

The design came from CRN’s in-house team, with collaboration on the exterior and naval architecture from Omega Architects. Pulina Exclusive Interiors handled the interior styling.

Rio mixes sporty exterior lines with a vertical bow that gives it a handsome, contemporary look. The owners wanted a mixture of privacy and gracious outdoor living, so the design team combined three large exterior decks with aft overhangs on the first and second decks, and left the rear of the fourth deck open, but with an enclosed salon. The sizable beach club at the rear lower deck also has a lounge and fitness zone.

The newest CRN will undergo sea trials and final fit-out before being delivered to her owner.