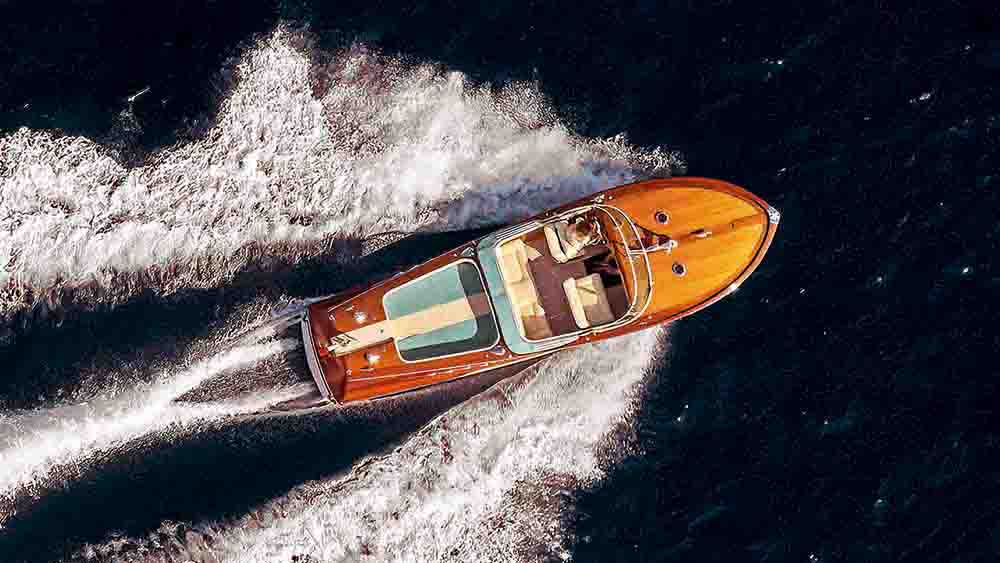 There are boats that look cool for a year. Others have such classic looks that can be reinvented from generation to generation. Then there are a handful that stand the test of time. The Riva Aquarama is one of those. Carlo Riva’s creation, celebrating the 60th anniversary of its launch in August, was an instant hit when it arrived in 1962.

Three years later, no other boat enjoyed the Aquarama’s elevated brand status; the owners included movie stars like Sophia Loren and Rex Harrison and a small group of royals, which added to the mystique in the public’s eye. But most owners were high-net-worth individuals who were willing to buy an Aquarama for about the same price as a Rolls-Royce Silver Cloud, Italy’s most expensive car in the mid-’60s.

The boat’s beautiful mahogany exterior, sexy curves, and American engines made it an unbeatable proposition for the rich and famous at a time when the world was searching for new, modern status symbols after World War II. The Aquarama—which took its name from the cinematic technique panorama—quickly found a home along the French and Italian Rivieras. But eventually it became synonymous with Monaco. The principality was fast becoming the upscale, James-Bondish gathering point of celebrities and royalty that seals its reputation today. A harbor of gleaming mahogany Rivas added to the allure.

The Riva Aquarama was an instant hit when it arrived in 1962.  Riva/Assouline

“I know it’s an inanimate object, but if you have a passion and love for beautiful machines, as I do,” says Bruce Paddock, who owns the Aquarama Special Mistral II, “then you’ll identify with the design, performance and quality of the work. When you put those elements together, it creates a mystique and desire between the owner and the object.”

The Aquarama has been named the “Best Runabout Ever” by multiple boating magazines. I had the opportunity to write a book that will be published later this summer about the Aquarama’s history for the centenary of Carlo Riva’s birthday and the 60th anniversary of the first Aquarama, Lipicar—named after Riva’s three daughters, Lia, Pia and Carla. Before researching the book, I’d assumed the Aquarama was a typical Italian boat, long on style, short on engineering and performance.

How wrong I was. One of the highlights of the project was spending a day at the helm of Gala, an Aquarama Super (the second model in the series), which was hull number 425 built in 1970 on Lake Iseo, near Riva’s historic Sarnico factory.

The boat was meticulously crafted from wood.  Riva/Assouline

Owned by Ferretti Group CEO Alberto Galassi, Gala was a stunning wooden boat, with ivory-colored upholstery, a Calax-style steering wheel inspired by a 1958 Chrysler 300, and side throttles. Unlike most boats, the helm is on the left side. Riva had decided early on to model the Aquarama after the finest luxury cars with throaty American marine engines (Gala had twin 320 hp Rivas, which were modified Crusaders). The hand-built wooden hulls were built on a production line like cars for quality control and timely delivery.

At the dock, Gala had a stately presence, with pinstripes on the light-colored mahogany foredeck, a beautiful reddish-tinted hull, gleaming chrome, and a wraparound automotive-style windshield which was radical for the day. The oversized steering wheel felt perfect for a boat that would’ve been compared to a Cadillac or Lincoln in its day. And the side throttles were also modeled on a car to make it more intuitive for new owners who were not necessarily boaters. The hull had been designed for ocean running—after Riva had been chided by a longtime friend for building “lake boats.”

We didn’t find any big seas running around Lake Iseo, but the lake, with mountains in the distance, was a perfect backdrop to this 52-year-old beauty. Galassi, who had wanted an Aquarama as a child, believes that the Aquarama is the most perfect design ever. “The sound of the engines, the wood, the beautiful sweep of the hull, the performance,” he says, listing the attributes.

Carlo Riva’s creation is celebrating the 60th anniversary of its launch in August.  Riva/Assouline

He forgot the word fun. It was such an enjoyable boat to drive, turning sharp with the twin engines. When the hull slapped it was a much softer sound than fiberglass. There was a sense of grace and performance, especially considering its age, that I hadn’t felt before. I had the helm a few hours but let the captain dock it, as the mahogany finish was flawless and I didn’t want to leave any scratches. I know it’s over-hyping it, but I have to say my day aboard Gala—probably because I knew so much about Aquarama’s history—was one of my most memorable days on the water after 30 years of testing boats.

Beyond the beautiful, varnished wood and chrome work, features like the bow anchor locker, with a clever self-retrieving anchor system, and the soft canvas top had a huge spring inside to make it easy to raise and lower the canvas when it started to rain. Wicker drink trays were built into the backs of the forward seats, and a beautiful sunpad was designed over the engines. The transom was sloped to allow easy access to the water. The details had clearly been set and then reset by Riva and his team.

The owners included movie stars like Sophia Loren and Rex Harrison and a small group of royals.  Riva/Assouline

Despite the beauty, Aquarama owners love to use their boats, rather than groom them for classic boat shows. “We put 650 miles on the hull during our first season, and that was on weekends,” says Sean Brown, who with wife Delphine, bought The Brown Knight in 1998 and keeps it at their home on Lake George, NY. “This boat runs the way boats should run—fast and stable with no trim tabs. I don’t want a show queen.”

Among American classic boat owners, who tend to favor domestic brands like Chris-Crafts and Garwoods, the Aquarama is an outlier. But there are large classic Riva collections, including many Aquarama owners, on Lake Tahoe, Lake George, the Great Lakes and freshwater lakes in Florida. Among the 760 completed Aquaramas, 650 are still around. The most historic models in the best condition continue to fetch high six-figure prices.