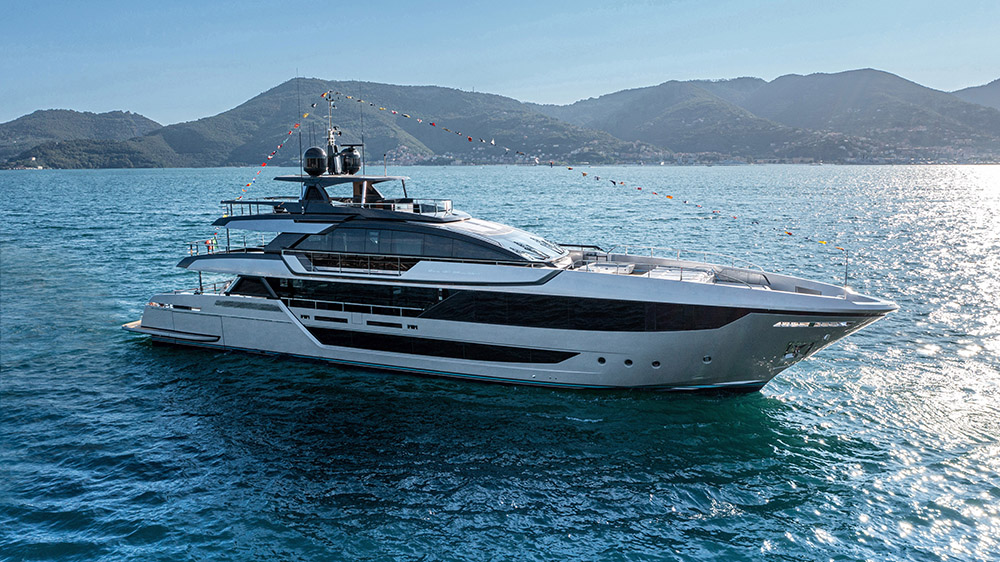 Riva’s new fleet member proves that big and beautiful are not mutually exclusive.

The elegant superyacht, which left the Italian builder’s La Spezia yard on Thursday, spans an imposing 130 feet and is the largest model in Riva’s flybridge range. Fittingly, it’s also the new flagship of the series.

Named after the Italian word for “very beautiful,” the Bellissima is a looker, too, showcasing expert craftsmanship, the latest technology and high design. The model was penned by Mauro Micheli of Officina Italiana Design. The Italian firm, which Micheli founded with Sergio Beratta in the late ‘90s, has designed all of Riva’s yachts for the past 27 years. The Ferretti Group (Riva’s parent company) also had a hand in the design, of course.

The Bellissima is characterized by a sleek planing hull and three simple lines that run from tip to tail. Similar to a sports car, the yacht features air intake grills, carbon fiber detailing and a dynamic hard top. It also sports extensive glazed surfaces that ensure the interiors get plenty of natural light.

With a wide body and a beam of roughly 26 feet, the Bellissima affords a generous amount of space onboard. In fact, Riva says it’s the first yacht in the range to have three “real decks” while also remaining under 300 GT. At the heart of the vessel, the main saloon offers sweeping 270-degree views, ceilings of over six feet and handsome rosewood accents. The lavish owner’s suite is located on the main deck, while four guest cabins with en suites sit on the lower deck.

Outside, the flagship’s redesigned stern area is lower and closer to the water. Spanning 645 square feet, it houses a large beach club and a cockpit. On the upper deck, meanwhile, there’s a dining area for 10 and two private balconies. Above this, the sundeck is the perfect place for cocktails. Elsewhere, there is a lounge and sun pad in the bow, along with a garage in the port-side hull for a Jet Ski, tender and seabob.

At 130 feet, Bellissima is the largest model in Riva’s flybridge range.  Riva

As for grunt, the Bellissima is powered by twin MTU engines that give her an estimated top speed of 22.5 knots and a cruising speed of 20 knots.

“When you see a Riva cruising on the water, a Riva Bellissima, everything stops and you can pause the world to enjoy a tailor-made miracle, an aesthetic experience that words can’t describe,” Ferretti Group CEO Alberto Galassi said in a statement.

Following sea trials, the Italian beauty will be delivered to her American owner.