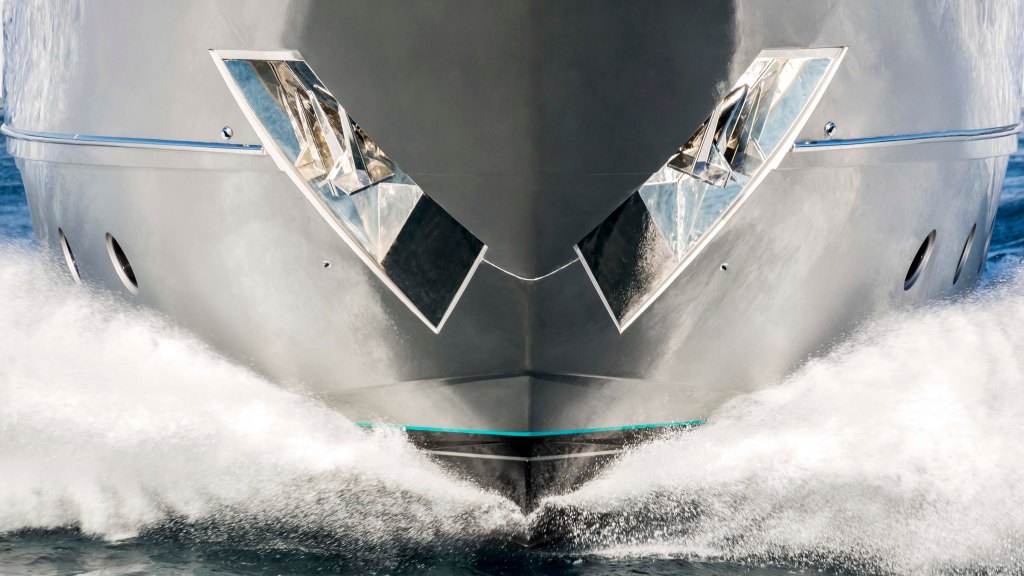 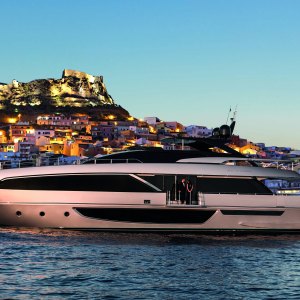 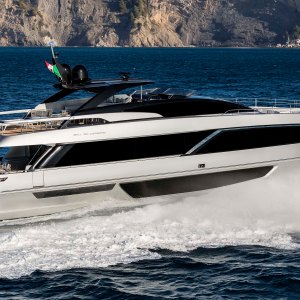 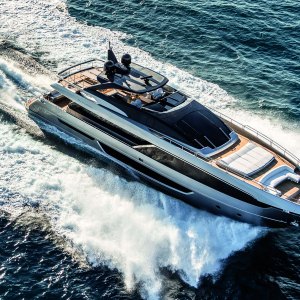 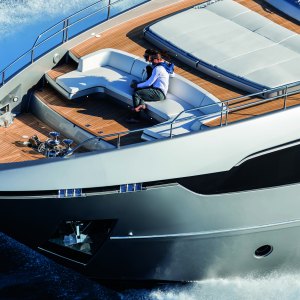 The yacht is certainly a departure for Riva, known for smaller sport boats like the Aquariva and Rivarama, but retains the brand’s sleek lines and planing hull. Its aggressive-looking prow is shaped like a spear’s head.  The exterior design by Mauro Micheli and Sergio Beretta of Officina Italiana Design, along with input by Ferretti’s Product Strategy Committee, headed by Piero Ferrari (yes, that Ferrari), emphasized large expanses of tinted windows to match the dark gray metallic color of the hull. The yacht has a space-age look that somehow works with its classic lines.

Scuderia Ferrari pilots, Sebastian Vettel and Kimi Raikkonen, on board the Riva 100 Corsaro during the Monaco Grand Prix  Callo Albanese

The broad 21-foot beam adds to the interior volume, but the boat never appears bloated or cumbersome like some wide-body yachts. That extra width makes the minimalist-looking interior seem larger than a 100-footer, particularly the large saloon that includes a formal dining area. Fold-down platforms along the side passages, connected to sliding glass doors, add more light and width to the dining area, with an exceptional view of the water.

The full-beam master suite also benefits from the wide body, boasting a walk-in closet, small office, and large en-suite head forward, with his-and-her sinks, toilet, and bidet.  Below are four staterooms, three doubles, and a twin, and three staterooms for the captain and two other crew.

Known for its flawless joinery, Riva’s Corsaro did not disappoint at Monaco. The woodwork was beautiful, impeccable, and extensive throughout the saloon. It gave the interior more of a formal, executive look than the more informal designs currently in favor with many yacht builders. Why not? Riva is a 175-year-old builder that epitomizes old-world craftsmanship rather than contemporary flash. The Italian builder says that the boat is already a “commercial success.” The Corsaro 100 was certainly a gamble for the yacht builder, but the odds were always in favor of it captivating new buyers who like its elegance, unique look, and, given its size, excellent speed.

With twin MTU 16V 2000 M96 engines, the Corsaro has a top speed of 26 knots, and cruises at 23 knots. Like all Riva superyachts, this 100-footer is customizable. The owner of the first Corsaro, delivered in Hong Kong in March, wanted a multifunctional lounge for business that included a karaoke system for after-hours entertainment.