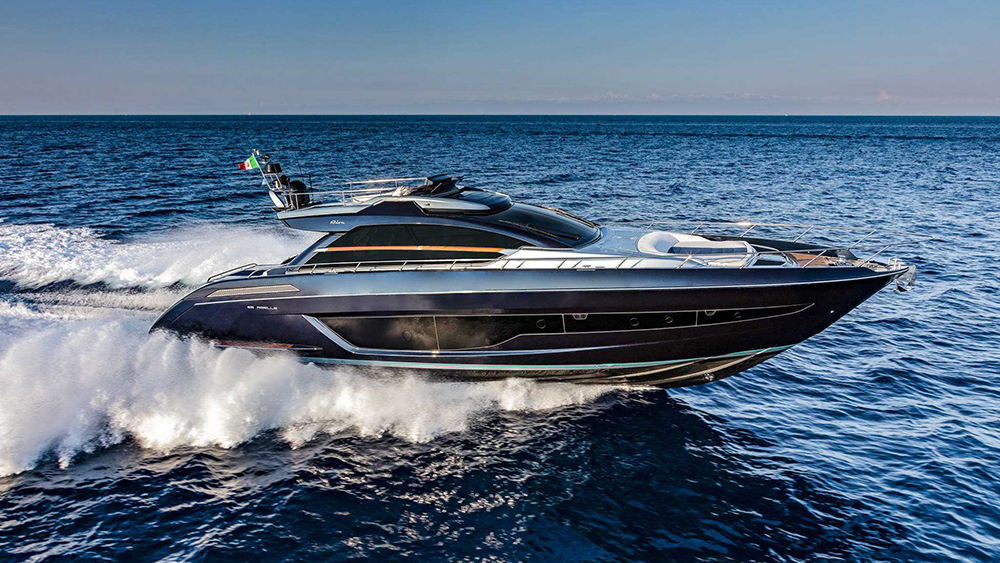 When is a coupe not a coupe? When it’s the new Riva Ribelle 66. The 66 was launched last week at the Cannes Yachting Festival after several months of teaser photos and hints about what the new yacht, which translates to “rebel,” would look like. It turns out that the reality lived up to the hype.

The 66-footer has a custom sapphire-blue hull color, a sleek profile with design cues from the Riva 76 Perseo that include a sloping stern, aft “wings,” and integrated stairs on both sides of the cockpit that drop to the water. Varnished mahogany and stainless-steel accents—on the railings, covering the tender garage, and along the lower sides near the water—distinguish it as a Riva. No other brand spends the time and craftsmanship on details like those.

They are certainly nice designer’s touches, courtesy of Officina Italiana Design and the Ferretti Group’s Product Strategy Committee (headed by Piero Ferrari, son of Enzo Ferrari), but they are just the start of the innovations.

Riva designates its new 66 Ribelle as a flybridge model, but the way the designers set the upper seats into the top does not compromise its sleek coupe aesthetic. The inset bridge is much larger than it looks in profile. It includes a double sun bed at the rear and full loungers across the rest of the space, with a centerline helm station.

While smaller Rivas like the Aquariva Super, Iseo, and Rivamare are the ultimate day boats, the Ribelle also ups the ante as a cruiser with a large sunbed, lounge, and dining table in the aft section of the boat and an even larger sunbed (measuring 75 square feet) on the foredeck.

The cockpit’s full-size glass door (with tilting window) creates a seamless transition between the cockpit and interior saloon. The Riva’s attention to detail is evident in the opaque mahogany woodwork, steel and lacquer in different shades of blue and white, and off-white furniture paired with ebony paneling. Riva used luxury brands to dress up the first 66, including Penelopeoggi and Mastrotto on the main deck and the owner’s stateroom, Maraiflora for the saloon’s upholstery, and Radaelli for bedding and pillows.

Belowdecks, the full-beam master suite has an impressive eight-foot headroom, with through-hull windows that overlook the water, a sofa, and three floor-to-ceiling closets. The other two staterooms are not as large, but the quality of the fit and finish is just as high.

The 66 is powered by twin MAN 1,550 hp V-12 engines, which give the boat a top speed of 37 knots and a cruise speed of 33. Riva’s new rebel promises to set new standards in its class, not just for aesthetics but also for clever design and functionality.