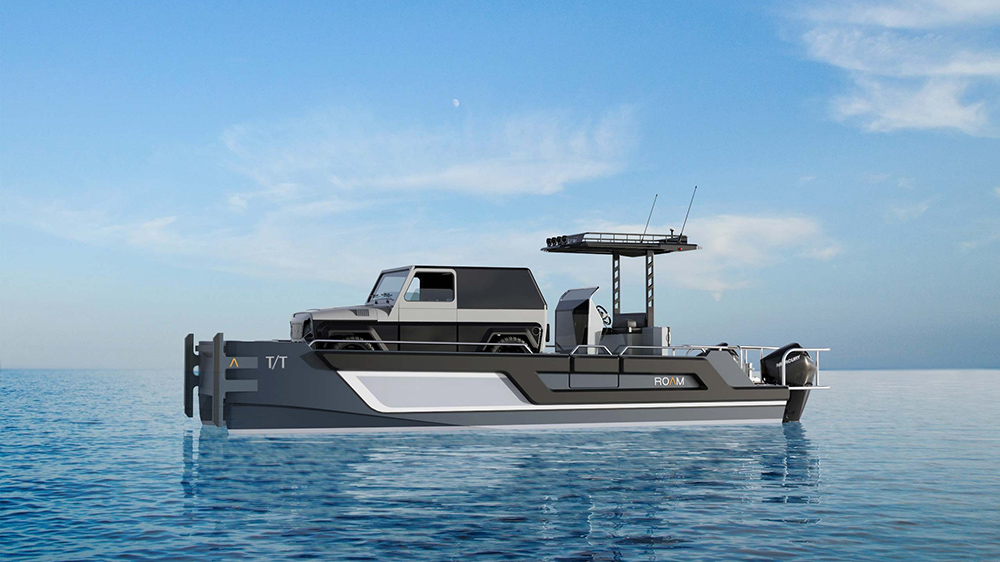 Roam has labeled its newest model a rugged out-and-out utility vessel. Coincidentally, the catamaran can also carry your preferred sports-utility vehicle across the seas.

Featuring naval architecture by Argo Navis, the new Roam Landing Craft spans 28 feet from tip to tail and can be used to transport toys, tenders or your favorite Range Rover from ship to shore. You could even use it to chauffeur your guests between the mothership and the mainland.

It may not be the most stylish yacht on the market, but it certainly sounds like one of the most practical. The multihull has a draft of just under two feet to ensure it can easily navigate shallow waters. With a beam of roughly 10 feet, it can seat up to six guests and two crew in total. It is also equipped with a drop-down door that makes loading and unloading vehicles a cinch.

Although the sprawling open deck was specifically designed to accommodate cars, the versatile platform can also double as a refuse and equipment area, a people carrier, a dive platform or a chic alfresco dining area. It features a rather elegant wooden deck, too, which gives a few style points.

As for grunt, the cat is powered by twin Mercury V-6 engines good for 176 hp each. Weighing roughly 4.4 tons, it can achieve a cruising speed of 20 knots and a maximum speed of 28 knots.

The landing craft is the latest addition to Roam’s fleet of go-anywhere vessels. The lineup also includes inflatable boats, beach landers and adventure RIBs. The yard, which has offices in the UK and Monaco, also released a 115-foot shadow vessel called Roam 35 back in March.

Built to order from aluminum, the new landing craft takes as little as six months to complete. It is also available as a smaller 25-footer or a larger 36-footer. The latter may be best if you want to schlep around a hulking four-wheeler, like, say, a full-size Mercedes-Benz GLS. Decisions, decisions.