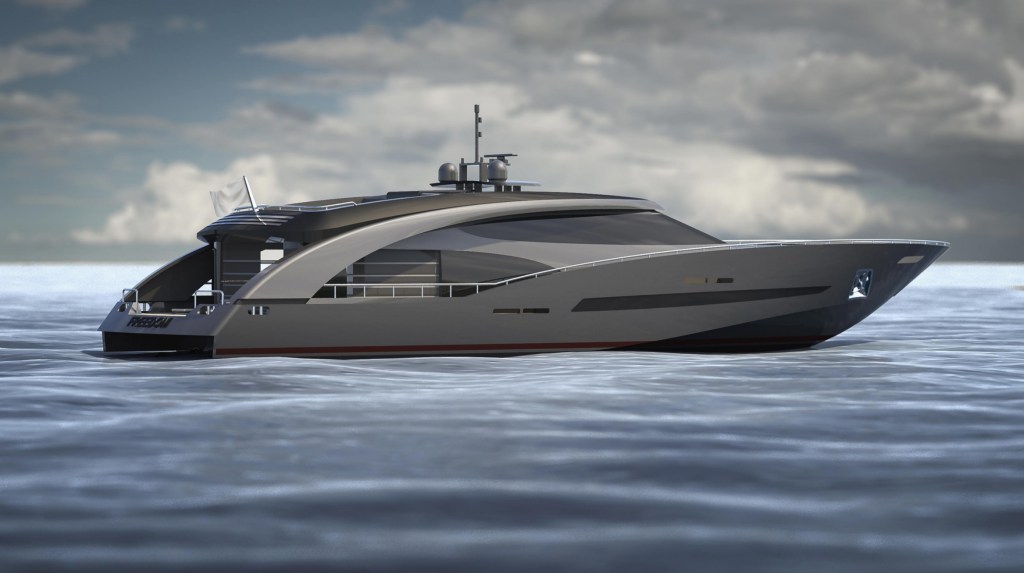 The 88-foot motor yacht Freedom, being built for fashion designer Roberto Cavalli, is proceeding on schedule, according to superyacht builder CCN. Freedom is part of the Italian yard’s “Fuoriserie” line, one-off custom projects built for clients who want to break boundaries in yacht design.

Cavalli has owned several yachts named Freedom, but this promises to be the most innovative of the bunch. Taking a lead role in the design, Cavalli collaborated with yacht designer and friend Tommaso Spadolini, who has created more than 120 yachts. The two designers gave Freedom a unique, almost mysterious, stealthy look with many practical features.

Cavalli wanted a striking exterior for his yacht that reflects his personality. The yacht’s twin arches extending aft over the large cockpit are certainly a design statement, but they also have the practical effect of enhancing onboard privacy, a priority high on Cavalli’s list. There is also an enclosed glass area in the cockpit so Cavalli can enjoy the outdoors on a rainy or windy day, in a climate-controlled room. A second open area on the flybridge invites social gatherings. The foredeck also has several large sunbeds.

The full-beam master suite is located just behind the forward helm station, making full use of the yacht at its widest point. The saloon has a large skylight to enhance natural light across the main deck. On the lower deck are two guest staterooms and a large crew quarters. The flybridge has its own interior pilothouse so Freedom’s captain can remain focused on navigation while the guests socialize in the saloon or outer cockpit. Freedom not only looks fast, but the yacht will be—reaching 40 knots. It is powered by three engines connected to water jets to maximize speed. The yacht’s tender will be located forward. Freedom is expected to be launched on schedule in early 2018.