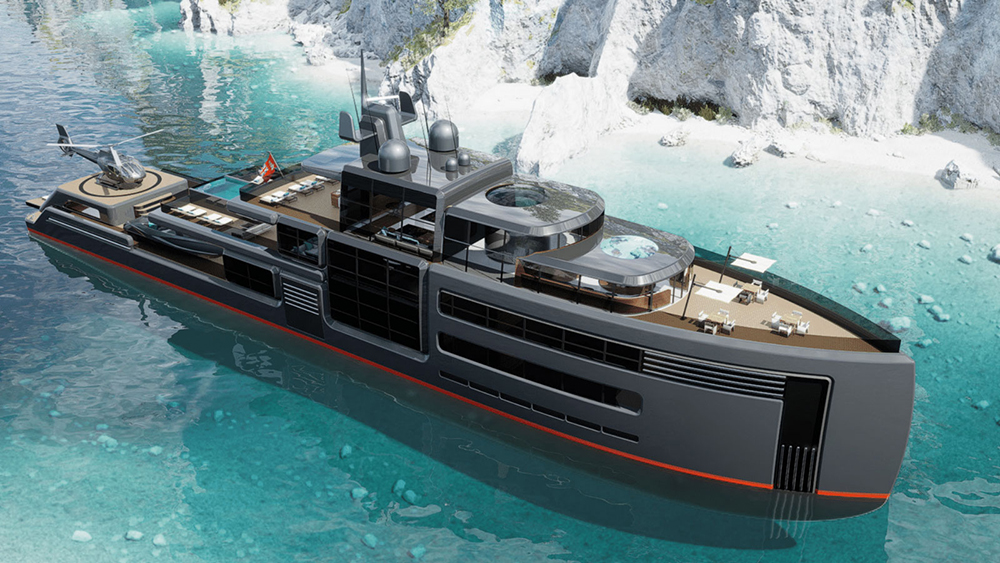 Roberto Curtò’s newest concept Qube has many facets, just like its geometric namesake.

Taking cues from modular yacht design, which came to life in 2011, the new explorer yacht is replete with multipurpose spaces that give you a little more versatility than a traditional vessel. The wide-open aft deck, for instance, doubles as a space to store your tender and an alfresco entertaining spot.

Furthermore, Qube is available in an array of sizes to cater to different needs. There’s a standard 213-foot model for full-fledged expeditions, along with a mid-range 164-footer and a 98-foot pocket explorer. The hull is offered in a range of colors, too, including scarlet, yellow, sea blue, emerald green, cool gray and jet black.

Onboard, the 213-footer offers a generous volume of 1,500 GT. Although details regarding the interior layout have not yet been shared, it’s safe to assume Qube could sleep at least 12 guests. Propulsion also remains under wraps, but given the explorer designation, you can expect this thing to hum.

The foredeck is dotted with a small tables.  Roberto Curto Design

As to be expected, Qube is also outfitted with an array of lavish amenities. Starting at the stern, there’s a sizable swim platform with sun lounges and stairs that lead to the enclosed beach club. That comes equipped with a supersized TV and plenty of comfy seating. It’s also topped with a helipad that can house your chopper.

Elswehere, the upper deck sports a large swimming pool while the foredeck is dotted with small tables and parasols for intimate gatherings. There also appears to be a striking atrium connecting all three decks.

Of course, this not the first head-turning yacht we’ve seen from Curtò. The avante-garde Italian designer has penned a number of disruptive concepts, including a spectacular 207-foot superyacht that was somewhat strangely inspired by a cuttlefish. Curtò’s eponomouys firm has also collaborated with the likes of Galeon Yachts, Capelli and Intermare, to name but a few.

While a builder has not been officially named for the studio’s newest model, we certainly hope Qube takes shape.