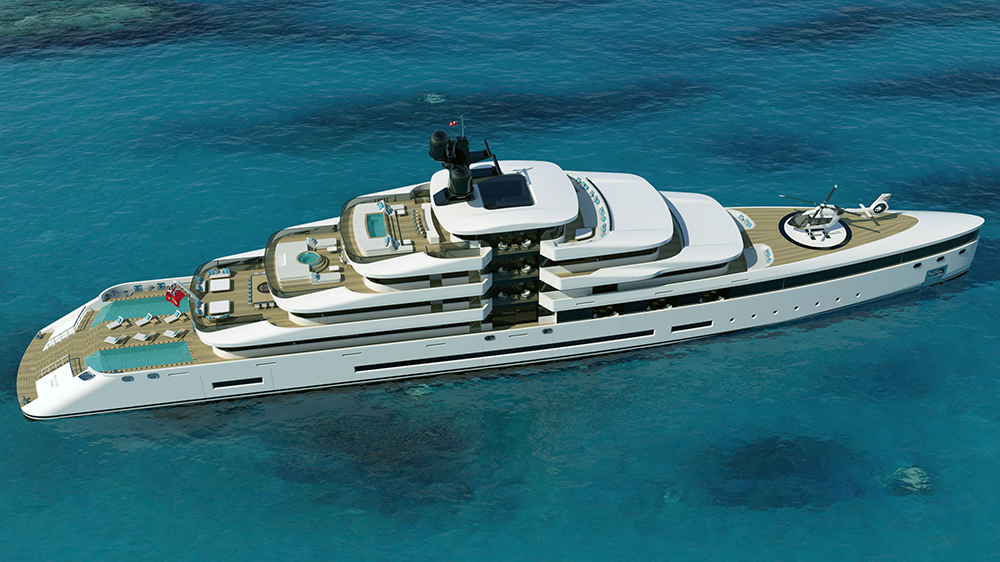 An infinity pool on a superyacht is pretty standard these days—but two, well, that’s something quite new. And the novel feature is one of the highlights of a new megayacht concept by Rodriguez Design.

The burgeoning studio, which was founded by designer and sailor Josh Rodriguez, has just unveiled a 360-footer that eschews traditional yacht design in favor of an “architectonical approach.” In other words, the team focused on form and incorporated elements found in structures on land.

The vessel, which has been christened Malena, has a symmetrical superstructure with balconies running down the center and on both sides of each deck. It’s designed to emulate a high-end high-rise, according to the studio.

The central balcony system is similar to that of a luxury residential building, according to the studio.  Rodriguez Design

“With the side balcony system, we wanted to create the feeling of being on a super-luxury skyscraper,” Rodriguez said in a statement. “Wherever the yacht is docked or moored, the city will have a new addition to its skyline.”

Like any good residential tower, Malena offers comfy common areas and plush accommodation within. The owner’s deck, of course, plays the part of the private penthouse. It can be closed off from the rest of the yacht by a set of sliding exterior doors to keep things nice and quiet. In addition to a generous suite, the secluded deck sports a lounge, dining area and a Jacuzzi with accompanying sun pads. As for guests, there are six VIP suites on the main deck and four double cabins on the lower deck that can together sleep 10.

Malena has the amenities of a supertall, too. To the aft of the main deck, there are two matching 30-foot infinity pools along with sunbeds and a bar. From here, take the stairs down toward the hydraulic swimming platform at the stern for direct ocean access.

The infinity pools each measure 30 feet in length.  Rodriguez Design

The upper deck, meanwhile, comes equipped with an alfresco dining area for 24 guests to the aft and a touch-and-go helipad forward that can accommodate an Airbus ACH 160. Higher still, you’ll find the open-plan sundeck, or party deck, as Rodriguez calls it. Similar to the rooftop terrace of a skyrise, it features a bar for seven people, yet another Jacuzzi and the day head, as well as stellar views.

The best bit? Malena, unlike her inspiration, is not stuck on dry land. Powered by a hybrid diesel-electric propulsion system, she has a top speed of 18 knots and a range of 6,000 nautical miles when cruising at 12 knots. Show us a skyrise that can do that.