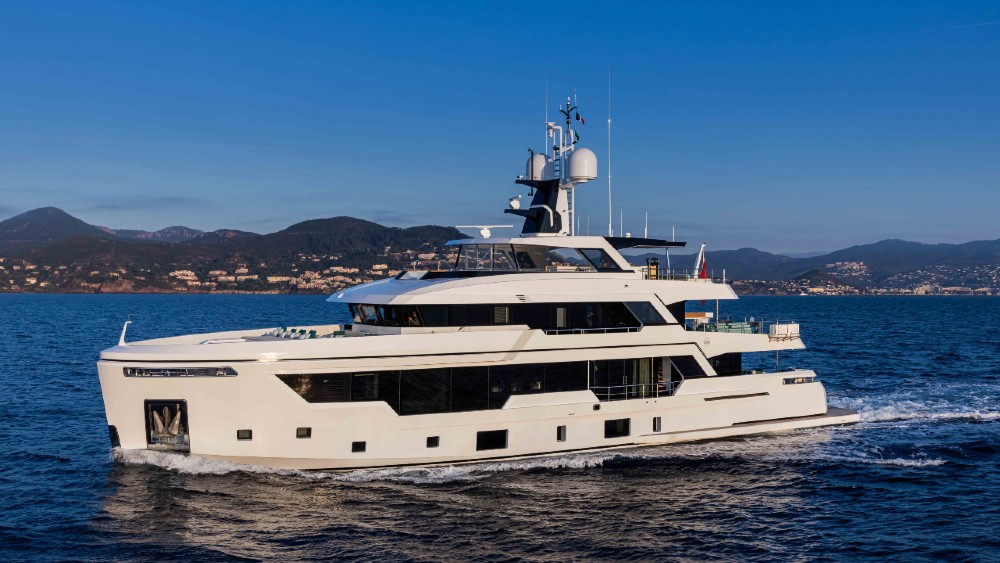 Looks can be deceptive. While this glass-rich 125-footer has all the breezy openness of a sun-seeking superyacht, she has the rugged construction, endless 5,000-mile range and stay-off-the-grid functionality of a globe-girding explorer.

This is Emocean, the first luxury offering from Italian work-boat builder Rosetti Marino Group and its new superyacht division Rosetti Superyachts. Launched just last year for a seasoned European boating couple, she was designed to go far and wide, in the utmost comfort, capability and safety.

“Emocean has the looks of a stylish superyacht, but the strong bones and true capability of an explorer,” Andrea Giora, Rosetti Superyachts commercial director tells Robb Report during a tour of the yacht at this week’s Palm Beach International Boat Show.

Glass was a critical element to the owners, so Rosetti used floor-to-ceiling windows in the salon and the staterooms.  Courtesy Alberto Cocchi

Much of Emocean’s capability is down to the pedigree of the Ravenna-based shipyard. For almost a century, Rosetti Marino has been turning out gritty, no-nonsense, oceangoing, commercial vessels for the oil and gas exploration market.

You can see the yacht’s commercial-grade pedigree in its heavy-duty steel construction, its efficiency-improving bulbous bow and round bilge design.

The hull and exterior design were the work of Italian naval architects Hydro Tec. The firm balanced the strength of the steel hull with aluminum for the yacht’s superstructure to reduce weight and lower its center of gravity.

This is the first yacht from Rosatti, which has built its reputation on offshore oil and gas exploration boats.  Courtesy Alberto Cocchi

The twin, smaller-than-usual 800-horsepower MAN diesels, sip just 16 gallons an hour at the yacht’s 12-mph cruising speed. Her max is 15mph. They can take the yacht over 5,000 miles on a tank.

But what goes against Emocean’s explorer yacht persona is all that glass in the hull sides. “One of the owners’ key requirements was that the yacht should be filled with light,” says Giora. “Everywhere they walk in the yacht, they want to feel connected with the water through windows.” One positively breathtaking—literally—use of glass is in the yacht’s upper-deck interior. In a walkway into a salon area, a seven-by-five-foot section of flooring has been replaced with clear glass. Walking across it for the first time, and peering down into a lower deck ten feet below, is guaranteed to make you gasp.

The wine “cellar” is a point of pride for the owners.  Courtesy Alberto Cocchi

From the stern, you pass the beach club with its comfy sofas, and take the grand steps up on to the main level deck. One level above—reached by a dramatic floating staircase—and you’re into the main entertaining area.

A word about the furnishings. The owners are dedicated vegans who demanded no leathers and furs and no plastic whatsoever in the interior. “When the owners cruised Emocean to the Caribbean recently, they took their family and friends to different beaches to collect and dispose of any plastic trash they found,” says Giora.

What about all those teak decks on the boat? According to Giora, the owners visited the METS marine equipment show in Amsterdam to meet the synthetic teak-decking manufacturers.

The family’s vegan lifestyle influenced the design, with no furs, leathers or plastic allowed in the interior.  Courtesy Alberto Cocchi

“They really tried not to use teak, but in the end just didn’t find an alternative that provided the grip, the feel underfoot, and heat resistance,” says Giora. “Maybe next time.”

Inside, Emocean has accommodation for 12 guests in five cabins comprised of a main-deck master suite and four lower-deck guest cabins.  That master is a standout with its full-beam space, expansive his-and-hers bathrooms, walk-in closet, private waterfront balcony, and separate office.

“The owners hate being in port or marinas, so the focus is on self-sufficiency at anchor,” says Giora. “She has zero-speed stabilizers to reduce any roll, and no fewer than five fridge-freezers, two washing machines, and two dryers.”

After her Palm Beach showing, Emocean will head back to the Mediterranean for the summer season. For the few times the owners are not aboard, the yacht will be available for charter through Camper & Nicholsons at $160,000 a week.