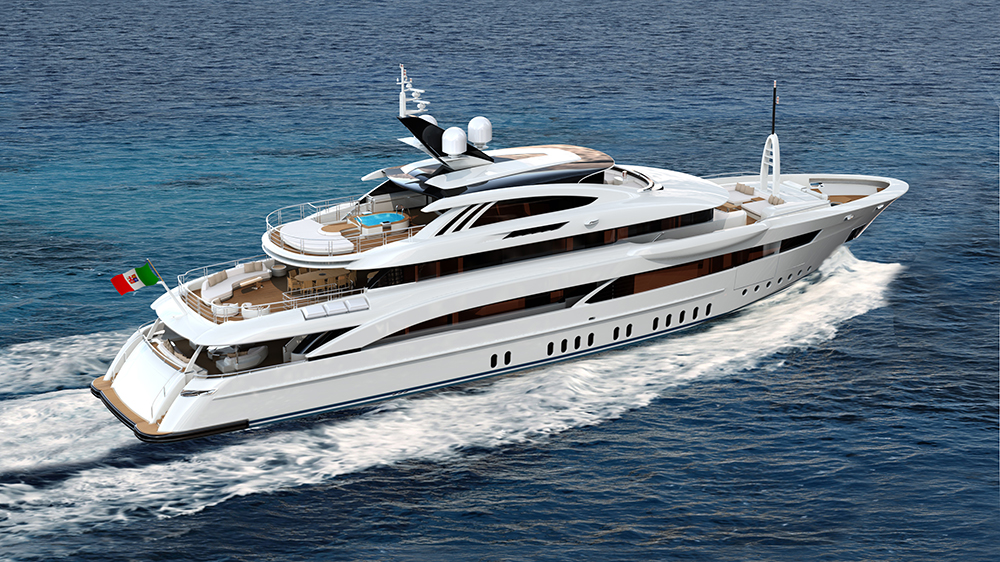 Rossinavi is the heavy metal master of the marine world and its latest superyacht shows why. The fully custom 170-foot masterpiece, known as Florentia, sports an impeccably made steel hull that is as striking as they come.

Florentia was commissioned by an exacting owner who tasked the yard with creating a timeless gem that pairs classic features with modern details. Rome-based architecture firm Studio Vafiadis spearheaded the exterior design, while Italian designer Carlo Colombo of A++ design studio took care of the interiors. As with all of Rossinavi’s high-quality vessels, Florentia was built entirely in-house at the yard in Viareggio and hit the sea on June 13.

“Florentia is the most representative example of a fully bespoke superyacht made in Italy,” says Stefano Vafiadis of Studio Vafiadis.

Florentia is characterized by sinuous lines and a sleek silhouette that together give her an effortless elegance. She features a full-displacement steel hull and aluminum superstructure, as well as 800GT of interior volume. Power-wise, twin 1,750 hp Cat 3512E motors propel the vessel to 15 knots at full tilt or 13.5 knots cruising. She can cover some 5,000 nautical miles when chugging along at 10 knots.

The interior, meanwhile, was inspired by the ocean’s waves and features a soft, neutral color palette and high-end materials that make it both peaceful and relaxing. The pièce de résistance is the central staircase that serves to connect all areas of the yacht in a harmonious manner. Standout features include an amphitheater-like upper deck which can double as a cinema thanks to a built-in projector, an expansive main saloon and dining space that’s divided by a bespoke cabinet, and a generous main deck where guests can take in the ocean views.

Florentia’s generous layout can accommodate up to 12 guests and 11 crew members. The main-deck owner’s cabin features its own private balcony, not one but two walk-in wardrobes—somebody likes their clothes—an ensuite and incredible saddle-stitched leather bed. Not to be outdone, the VIP suite off the fly deck has a living room, ensuite, private balcony and access to the outdoor jacuzzi at the stern. The lower deck features two king bedrooms and two doubles for the remaining cabins guests, as well as the crew quarters which includes five twin rooms, a kitchen, living room and laundry.

There is just one glaring problem with Florentia, at least for potential buyers who might want the same yacht. She’s a one-off. That’s good news, of course, for the Rossinavi aficionados who appreciate the yard’s diversity over the years. The yachts are unique, but equal for beauty and levels of build quality. They range from Aurora to Endeavour II to Utopia IV and more than a dozen others. Vector 50 and LEL are expected to launch later this year.

Check out more renders of Florentia below: