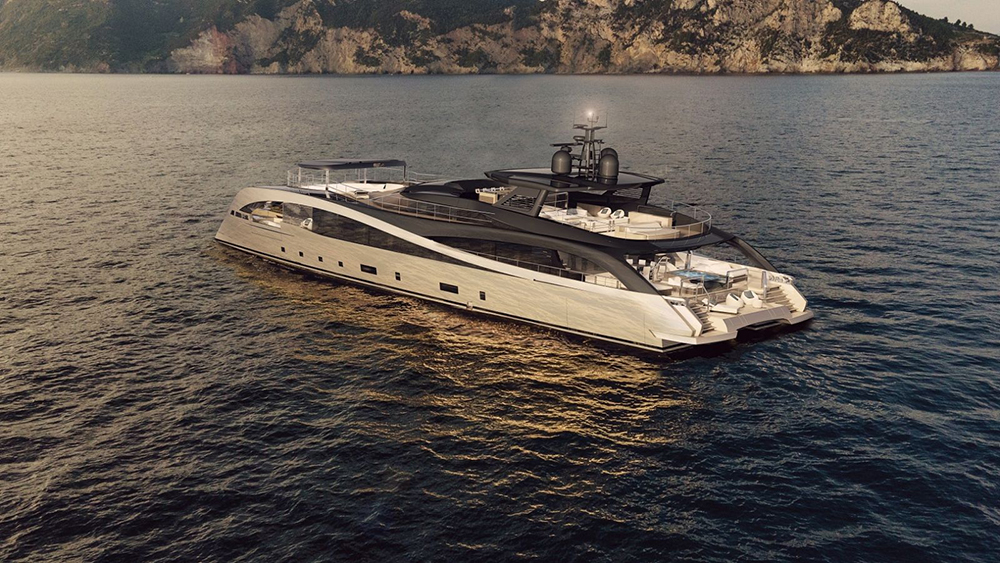 Algae may not seem like the sort of thing that would inspire a superyacht, but Rossinavi has credited the aquatic plant with doing exactly that.

The Italian yard has just unveiled its first electric catamaran concept, known as Sea Cat 40, which it says takes cues from phytoplankton. This specific type of marine algae lives in the upper layers of the ocean and converts sunlight into energy for survival. In a similar fashion, Rossinavi’s 131-foot multihull is fitted with nearly 1,500 square feet of advanced solar panels that capture and store energy from the sun’s rays to power the vessel.

The panels are capable of producing 250 kWh, which Rossinavi says is on par with the daily electricity consumption of six average American homes. Designed for transatlantic crossings, the Sea Cat will be able to chug along continuously for 20 days and cover up to 3,850 nautical miles when cruising at 8 knots, according to the yard.

The cat is also equipped with a centralized AI control system to help preserve the battery’s power. It can be programmed to navigate 80 percent in full-electric mode, using only 20 percent of its diesel-electric support, for example.

To be sure, the Sea Cat looks good, too. Italian naval architect Fulvio De Simoni spearheaded both the exterior and interior of the 131-footer, which the yard describes as “modern and elegant.” Featuring an aluminum hull, she sports sinuous lines and a simple silhouette. Onboard, meanwhile, there are plenty of open spaces for entertaining, as well as five cabins for guests and four for crew.

“Supported by the most advanced technologies, Sea Cat 40 is able to offer excellent performance while prioritizing the environment, a real challenge for the future of boating and a milestone for the shipyard” Rossinavi’s COO Federico Rossi said in a statement.

Indeed, this is the first time in 41 years that the Viareggio-based yard has ventured beyond its usual custom superyachts and into the world of high-design catamarans. Further proof that the era of the multihulled motor yacht has arrived.