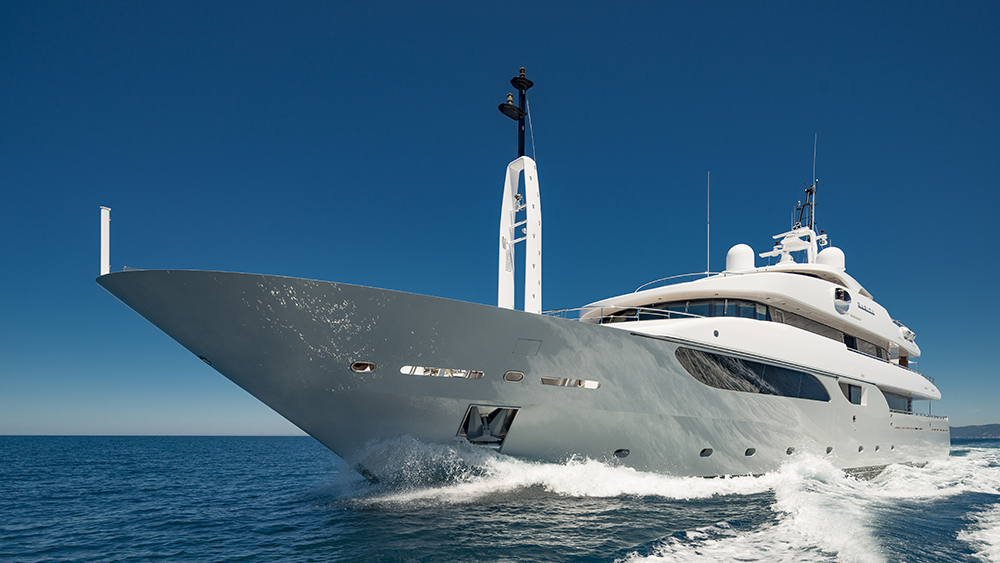 Rare by name, rare by nature. The 180-foot Rarity was originally delivered in 2008 by Italian shipyard Rossinavi, and the stylish and spacious superyacht has undergone a significant 2017 refit that not only spruced up its exterior and revamped its interior, but also added an all-important 5.9 feet to its length, too.

You may have admired Rarity’s steel hull and aluminum superstructure from afar, as the yacht was previously only for private use. But 2018 saw Rarity make its charter debut in summer, when it cruised the Mediterranean and welcomed charter guests on board for the very first time. And Rarity has never been in better shape for it. The yacht looks immaculate, sporting a gleaming light-gray hull and a new bulbous bow. Even the engine room—housing two 2,231 hp Caterpillar 3516 diesel engines—has received a luxurious new refit, and rightly so. With its maximum cruising range of 6,000 nautical miles, Rarity offers economical cruising, drinking just 66 gallons per hour, with a top speed of 15.5 knots and featuring zero speed stabilizers for guaranteed comfort both underway and at anchor.

A key feature is Rarity’s large beam of almost 33 feet, which offers extra space with vast deck areas and makes the yacht well suited to both personal group charters, including family adventures, and event charters; there is no better viewing platform from which to drink in the atmosphere of events such as the Monaco Grand Prix. Although not a small yacht per se, Rarity offers an impressive volume for its 180 feet. And with a gross tonnage of 736, the yacht feels a lot larger than others of the same length.

A motor yacht with Italian panache, Rarity’s exterior was designed by Rossinavi, with Alessandro Cusumano developing the naval architecture. The yacht’s clean lines have stood the test of time, but much of its interior space was completely updated during the 2017 refit. Inside, Rarity’s sophisticated interior was seamlessly reimagined by Italian studio Cristiano Gatto Design. The result is a contemporary living area punctuated with dynamic photography and artwork. Featuring no less than three lounges, as well as an upper-deck office/media room, the layout includes an open-plan main saloon and a formal dining area for all kinds of celebrations.

Six spacious suites, including a main-deck VIP and a master stateroom with private office and walk-in closet, accommodate up to 12 guests. The master also features a sprawling en-suite bathroom with a marble double shower complemented by dark marble flooring. Rarity’s lower-deck cabins, two doubles and two twins, are unusually spacious, and the portside twin converts to a double. Guests who sleep lightly will be pleased to learn that Rarity is noted for its low noise and vibration in the lower guest cabins, meaning rest and relaxation will be had, even when cruising at night.

The sprawling skylounge, with its bold accent colors and vast warm interior tones, features an impressive 220-inch theater screen for movie nights, while an integrated iPad-controlled AV/IT system is used throughout. The designers made accessibility a priority by way of an elegant glass elevator complemented by a wraparound staircase, both of which connect all four decks.

Rarity’s large exterior decks include a forward Jacuzzi with adjacent sun pads, providing guests with both privacy and panoramic views—the ideal spot for relaxing at the end of a long day.
The elevated sundeck is divided into four main stylized spaces, including the forward Jacuzzi, internal gym aft, skylounge behind the gym, and sunbathing aft of the skylounge. This means a multitude of socializing areas with countless loungers and sun spots to be enjoyed by the whole family.

Aft of the Jacuzzi is the well-equipped, fully enclosed, and air-conditioned gym containing a step machine, bike, treadmill, cross trainer, and weight bench. Rarity caters to both avid fitness fans and those looking to maintain a healthy lifestyle while on board. Overlooking the sundeck forward, it makes for a scenic workout. For cruising in warmer climates, Rarity is also equipped with air-conditioning on the exterior upper-deck aft space.

A significant 5.9-foot extension of the already generous aft teak swim platform edges Rarity into the 180-foot-length stakes. The platform is also equipped with a new set of wide and fully submersible steps—ideal both for guests who enjoy relaxing close to the water’s edge and for those immersing themselves in the thrill of water sports. New underwater lights glow at night, complemented by internal LEDs.

Experienced captain Toni Brok leads a dedicated crew of 12 to ensure flawless one-to-one service on board, while chef Spiro Pavlic (who once worked in Dubrovnik’s famed restaurant Nautika and trained at Noma in Copenhagen) delivers top-notch cuisine from breakfast and coursed dinners to movie snacks. The crew’s enthusiasm is matched only by the large stockpile of water toys and tenders stored in Rarity’s newly refitted tender garage, ensuring infinite on-the-water fun and exploration. In addition to a 23-foot Castoldi Jet Tender and a 21-foot Jet Tug D Novamarine tender, Rarity houses three Jet Skis, two canoes, and a selection of water skis
and wakeboards.

Weekly Rate: $275,000 for summer (based on the euro–dollar exchange rate in mid-July and not including APA and VAT)