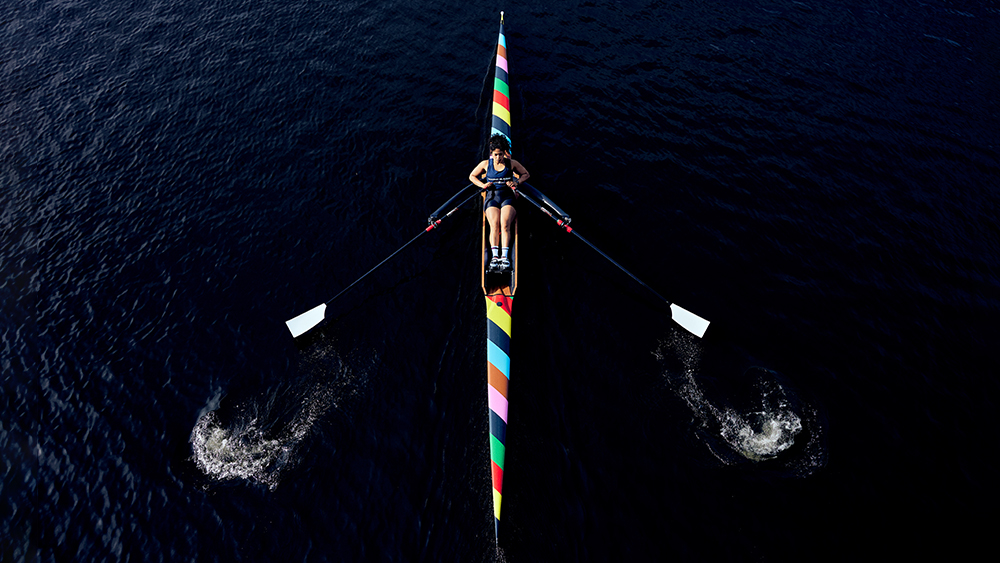 Since founding Rowing Blazers in 2017, Jack Carlson has made his name giving the traditionally fusty trappings of the country club set a hefty dose of irreverence. Now he’s applied that cheeky sensibility to the sport that started it all. Carlson has teamed up with WinTech Racing, the preeminent manufacturer of rowing shells, on a limited-edition sculling boat that aims to make rowing more colorful in every sense of the word.

The sleek carbon hull comes emblazoned with a rainbow of Rowing Blazers’ signature rugby stripes across the decks and sculling blades embellished with a playful zig-zag pattern. Produced in a limited run of 250 pieces, for each boat that is purchased, a WinTech training boat will be donated to a rowing organization focused on fostering a new, more diverse generation of rowers.

The project is, in many ways, a homecoming for Carlson, a World Championships bronze medalist who’s been rowing for some 23 years. Throughout his time in the sport, Carlson has been keenly aware that rowing suffers from a lack of diversity—both among its constituents and the boats they ride.

For each of the limited-editions scullers sold, a training boat will be donated to rowing organizations fostering diversity.  Rowing Blazers

“Access to it is expensive and limited,” says Carlson, noting that entrée has historically been granted by predominantly white private clubs and prep schools. Even during his five years on the U.S. national rowing team, Carlson observed “It’s just as noticeable in the upper echelons of the sport.”

In an effort to help rectify that, in 2014, Carlson got involved with Row New York, an organization that provides New York City teenagers from low-income families access to competitive rowing with an eye toward preparing them for academic success. It is one of numerous rowing clubs, vetted for diversity initiatives, that will be recipients of the donated training boat. Priced at $12,950, the collaboration has the potential to donate $1.4 million to build diversity among the rowing community. WinTech, which was founded by the father of Carlson’s friends and former Oxford rowing teammates Cameron and Tyler Winklevoss, has also been a longtime supporter of Row NY’s efforts. In that sense, the partnership is something of a family affair.

The boat’s design, too, is near to Carlson’s heart. It’s inspired by his earliest days on the water, learning to row in an old wooden single on the Charles river outside of Boston. “There’d be all of the old guys sculling around in their singles and, as we’d be rowing past each other, they’d always be like ‘Oh, what a beautiful boat,’” Carlson recalls. “I didn’t really appreciate it at the time that you really don’t see boats with those kinds of details, boats that look different from what everybody else is using.”

He brought some of that old-school charm to the collaborative sculler with a custom wood-veneered interior and seat. But unlike Carlson’s first boat, this WinTech is built with all of the latest performance technology. The design was engineered by celebrated naval architect Klaus Filter, using unidirectional checkerboard carbon and an ultra-lightweight carbon bow-mounted rigger, to combine superlative speed with standout style.

For all the innovation in materials and technical design, there hasn’t been much development in the aesthetics of sculling boats. “That’s what’s cool about it for me,” Carlson says of the new design. “It’s a very high-tech racing boat but definitely very irreverent. We took the time to take something that’s very functional and just make it more fun.” And, in the long term, make rowing’s many pleasures available to folks of all stripes.