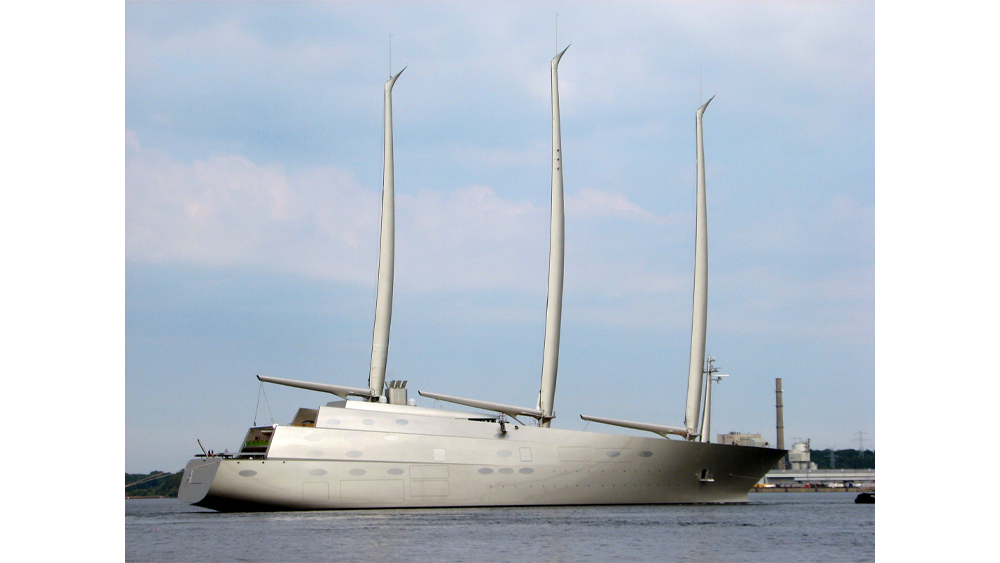 Italy’s finance police seized one of the world’s most iconic sailing yachts, owned by a Russian oligarch. Andrey Melnichenko’s Sailing Yacht A, with an estimated value of $578 million, was impounded in dry dock at the Port of Trieste, according to a statement from the Guardia di Finanzia. Melninchenko was sanctioned by the European Union on March 9 as part of a group of Russian oligarchs who met with Russian President Vladimir Putin following its Ukraine invasion to discuss the potential economic impact of EU and American sanctions.

Melnichenko owns the major fertilizer producer EuroChem Group and SUEK, a coal company. He also owns the 390-foot Motor Yacht A. A spokesperson said in a statement that Melnichenko has nothing to do with politics and that he has removed himself from the board of Eurochem and SUEK after the EU sanctioned him. “He has no relation to the tragic events in Ukraine. He has no political affiliations,” said the statement.

US intelligence officials have also said they are trying to link the Scheherazade, a $700 million superyacht in dry dock in Italy, to Putin. The New York Times reported that the US government has made no definite conclusions about the yacht’s ownership, but believe it could be owned by the Russian president. The yacht’s captain, Guy Bennett-Pearce, told the Times that Putin had no stake in the yacht, but declined to name the owner. Bennett-Pearce said he would provide Italian police with documents that divulged the owner’s name. The Italian Sea Group, which owns the shipyard where Scheherazade is dry docked, said that, based on “checks carried out by relevant authorities,” the yacht is “not attributable to the property of Russian President Vladimir Putin.”

Chelsea FC owner Roman Abramovich was also added to the UK sanctions list days after he announced the sale of the football club. Abramovich, who owns a string of supercars and several private jets, also owns the superyachts Solaris and Eclipse. Solaris is reportedly sailing towards Israel, where Abramovich has dual citizenship.

On March 3, France’s finance ministry said that it had impounded Amore Vero, a yacht owned by Igor Sechin, CEO of Russian oil giant Rosneft. The EU had sanctioned Sechin earlier that week, calling him one of Putin’s “most trusted and closest advisors, as well as his personal friend.” German authorities also detained the 512-foot superyacht Dilbar in Hamburg, owned by Alisher Usmanov. Reports said the crew was fired last week. On March 5, Italian authorities impounded two yachts, Lena and Lady M, owned by Gennady Timchenko and Alexei Mordashov, respectively.

On Friday, the US State Department placed Viktor Vekselberg on its sanctions list. Two of Vekeselberg’s luxury assets, an Airbus A319-115 jet and his yacht Tango, were identified as “blocked property.”

The superyacht Scheherazade was impounded in Italy during an investigation to uncover whether it is owned by Russian President Vladimir Putin.  Video Still/YT

The seizures have prompted the superyacht industry to distance itself from the oligarchs. Italian yacht builders Sanlorenzo and Azimut both released statements that they have limited exposure to Russian clients, and none are on the sanctions list. Heesen Yachts released a statement that two Russians sitting on its supervisory board of directors have resigned their positions. The builder said Heesen is 100-percent Dutch-owned company and that Pavel Sukhoruchkin and Pavel Novoselov had nothing to do with its day-to-day operations.

Ownership of many Russian yachts is often hidden by shell companies in tax havens like the Cayman Islands. They are not only hard to trace, but actually seizing and selling them could present a legal quagmire that could take years to resolve.

Some are wondering whether seizing the oligarchs’ private yachts and jets will work. “Sanctions are another example of the West doing what it does best, which is just throwing a lot of cash at the problem and hoping it gets solved,” Olga Chyzh, a professor of political science at the University of Toronto, told the Washington Post. “However sad they are to let go of their Western assets, oligarchs have even more to lose if Putin is no longer there to protect them.”

In the meantime, some oligarchs are taking their yachts to destinations like the Maldives, the Seychelles and Dubai, which have no extradition treaties with the US and EU. Dubai has become a favorite destination for Russian tourism and wealth.

Alex Finley, a former CIA officer, has been tracking the yachts from Barcelona. Using the hashtag “Yacht Watch,” she posts updates on Twitter for Russian-owned superyachts.

“For me, the yachts are a big, easily recognizable symbol of the more serious side of this [Russian invasion]: These are people who support a dictator, and have been supporting him in carrying out destabilization operations against democracy, while at the same time coming here and taking all the benefits of the exact same democracies they were destabilizing,” Finley told the Washington Post.