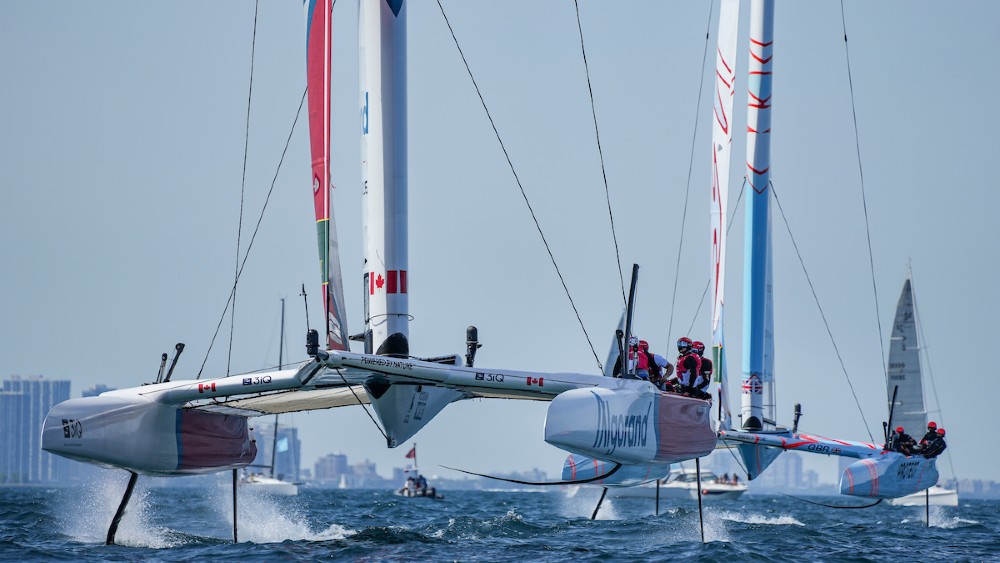 Australia claimed a surprise victory at this weekend’s SailGP event in Chicago over rivals Great Britain and Canada. It was the second race of SailGP’s third season, featuring state-of-the-art 50-ft. racing catamarans that are designed to lift on foils for speeds over 60 mph, while also being able to make hair-raisingly tight turns.

The fledgling sailing circuit has been bankrolled by Oracle Chairman Larry Ellison with the intent to become the Formula 1 of sailing. The fast raceboats are aimed at enticing local crowds, like those gathered at Navy Pier, but the series is also being packaged for a much larger television audience.

The circuit travels all over the world. Last season’s racing concluded last March in San Francisco, with the Australians claiming $1 million for the season finale against rivals Team USA and Team Japan.

The fleet offshore in Lake Michigan. Light winds prompted the boats to have their largest 95-foot-tall wingsails.  Courtesy SailGP

Over the weekend, however, it looked like the Aussies would be out of contention after the first day of racing. The Canadian team, which is racing its first season, won two of the three races. Driver Phil Robertson positioned his boat to claim the starts—which are crucial to the outcome of the race—with such precision that he won two of the three races. Australia was in fourth place at the end of the first day.

But the Australians won day two of the racing and eventually faced Canada and Great Britain in the three way-final. Australia’s driver Tom Slingsby dominated the final race, leading from the start to finish. The win gives Australia its fifth straight victory in the SailGP series.

Team Australia dominated day two with a series of flawless starts and then went on to win the three-boat race against Canada and Great Britain.  Courtesy SailGP

“Our team is just really good under pressure,” said Slingsby following  the race. “I have always known that but it’s nice for them to be recognized for it. I know if we have a high-pressure situation, the team will perform.”

The fledgling race circuit continues to collect followers at its races. The grandstands of Chicago’s Navy Pier were bustling with spectators. Chicago was a different experience since the teams had not raced on freshwater before, and the light winds prompted the boats to sail with their largest 29-meter (95-foot) wing sails.

Acrobatics during the racing is part of SailGP’s allure.  Courtesy SailGP

The weekend’s top speed was 41 mph, which was four times faster than the wind speed. Ben Ainslie, who leads Team Great Britain, last year set the record at 61.1 mph.

“There’s an element of danger we’re not trying to disguise,” Russell Coutts, who established the league, said about the high speeds and extreme maneuverability of the foiling yachts.

Big crowds turned out at Navy Pier to watch the racing.  Courtesy SailGP

The big disappointment in Chicago, at least for local fans, was Team USA. It finished in eighth place, just ahead of Switzerland.

“Certainly all the fans deserve better,” said driver Jimmy Spithill following the races. “We just weren’t able to execute clean laps, it’s as simple as that. There were too many mistakes and too many errors. We’re going to regroup, learn the lessons and move on.”

The next SailGP event will take place in Plymouth, UK, July 30-31.