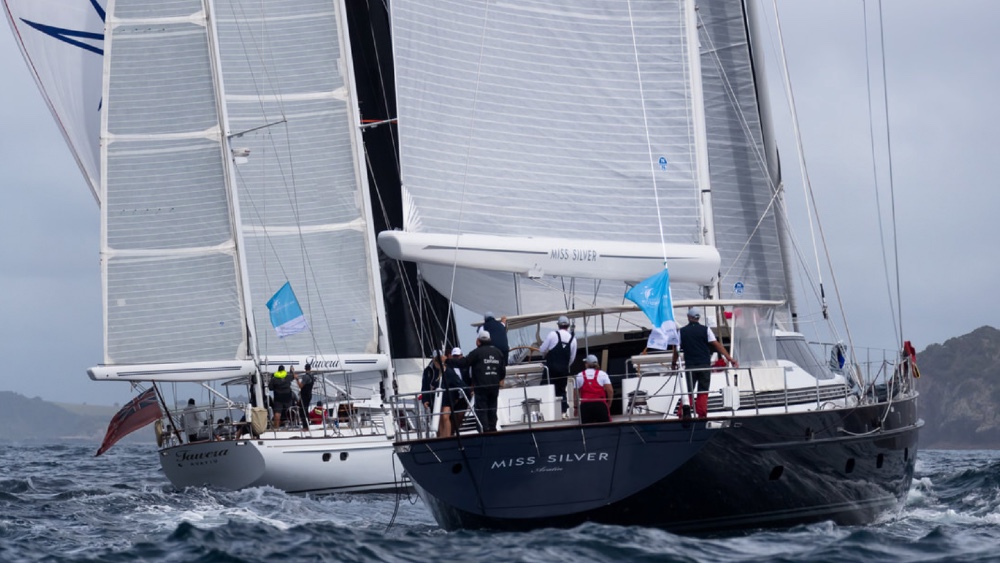 Superyacht regattas are one-part racing, one-part camaraderie and one-part fun. While the number of sailing superyachts at this year’s New Zealand Millennium Cup, which ran from March 28-31, was down to five because of Covid-19, the boats and crews in attendance still made the event fiercely competitive. The races all took places in New Zealand’s scenic Bay of Islands, with courses ranging from nine to 12 nautical miles.

Miss Silver won three days of racing at this year’s 15th annual event, first held beside the 2000 America’s Cup. The 118-foot Alloy yacht edged out the 85-foot Tawera, consistently in second place, and 111-foot Royal Huisman Sassafras, in third, followed by the 144-foot Vitters Catalina and the 102-foot classic Aschanti IV of Vegesack.

Beyond the sailing events, there is the hotly contested Rum Barrel Skiff Race, where the yachts’ crews jump into their skiffs and race for a 20-liter barrel of Mount Gay Rum. Tawera claimed the barrel after her team out-rowed the other yacht crews.

The final day of racing was illustrative of the event’s spirit. The organizers called off the races because of a lack of wind, but the participants made the most of the day by anchoring near each other in a turquoise bay. Owners, guests and crew then jumped from the yachts to swim with a local pod of dolphins. Catalina fired a celebratory onboard cannon.

“The spirit of this regatta is like nothing I’ve ever seen before,” said Sean Whitney, captain of Catalina, as formalities came to an end and celebrations got under way.

The Millennium Cup was expected to draw a much larger fleet this year, because of the America’s Cup in Auckland. New Zealand marine industry officials had forecasted the event would provide a boon of many millions of dollars to local shipyards for refits and supplies. But Covid-19 caused the country’s borders to shut down. Next year’s event is scheduled to take place from February 14-17.