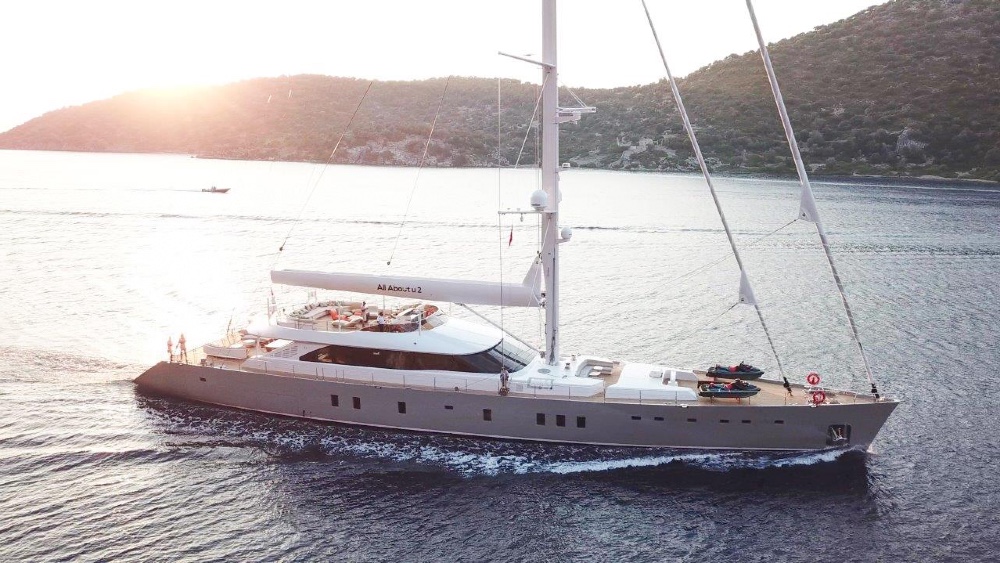 All Images Courtesy of Fraser Yachts

The contrasts between a motoryacht and sailing yacht are usually stark, with night-and-day differences in the layout and hull shapes. Even the largest sailing yachts need to make accommodations for masts, running gear and hull shapes to achieve their maximum sailing efficiency.

The 164-foot All About U2 is both an outlier and consolidator, with features gleaned from the far ends of the motor/sail spectrum. Despite the technical challenges, the motorsailer fulfills both missions, and an even larger one—to be the ultimate party platform on the water. She is a silent sailing yacht by day and floating nightclub at anchor.

“The owner is a larger-than-life character,” says Georges Bourgoignie, a broker at Fraser Yachts, who took Robb Report on a virtual tour. “He loves yachts, he loves parties and All About U2 is his playtoy. He’s also not a sailor, but likes the sexy aesthetic of a sailboat.”

The fold-down transom for the beach club is closer in style to a motoryacht’s stern.

Ultimately, the yacht was designed around charter, Bourgoignie adds, which means having fun. “She has six large staterooms, plus a massage room,” he says. “More importantly, she echoes the owner’s desire to go to anchor, put out the toys, get out the massive speakers with the DJ, and enter full-on party mode.”

Completed last year in Turkey by ADA Yacht Works, the yacht has nothing to do with spy planes or Irish rock bands. Rather, the name was taken from the owner’s–an Israeli tech magnate–first yacht, All About U, which followed a similar design.

Minus the mast, All About U2 is resembles a motoryacht, with a 750-sq. foot flybridge where the parties take place, thanks to the outdoor cooking facilities and a huge Bang & Olufsen sound system. For watersports lovers, the 430-square-foot stern descends towards the water, creating an extended swim platform. The beach club connects with this area, and pushes all the way into the yacht. You will not see a beach club like this on another sailing superyacht.

From the bow lounges to the stern beach club, to areas like the inner dining table, the yacht is designed around social occasions.

“One of the owner’s key requests was to have every deck flat, on one level, without stairs to trip up on,” says Bourgoignie, during the tour. “So, the main deck is all one level, then you go up to the flybridge and that’s on one level. The lower deck level includes the beach club.”

The contemporary interior reflects the simplicity of the exterior design. Clean lines and earthy tones are punctuated by flashes of zingy orange. The main salon offers vistas all around, including the captain’s viewpoint from the integrated helm.

All About U2 has another unusual contradiction: The yacht was built in Turkey on a design from Northern Europe, with the naval architecture by Dutch studio Ginton Architects.

The yacht is listed for $16.8 million through Fraser Yachts. The owner plans to build a new party yacht on a different platform—a 197-ft. explorer yacht. Check out the other areas of All About U2 below and then do the virtual tour.