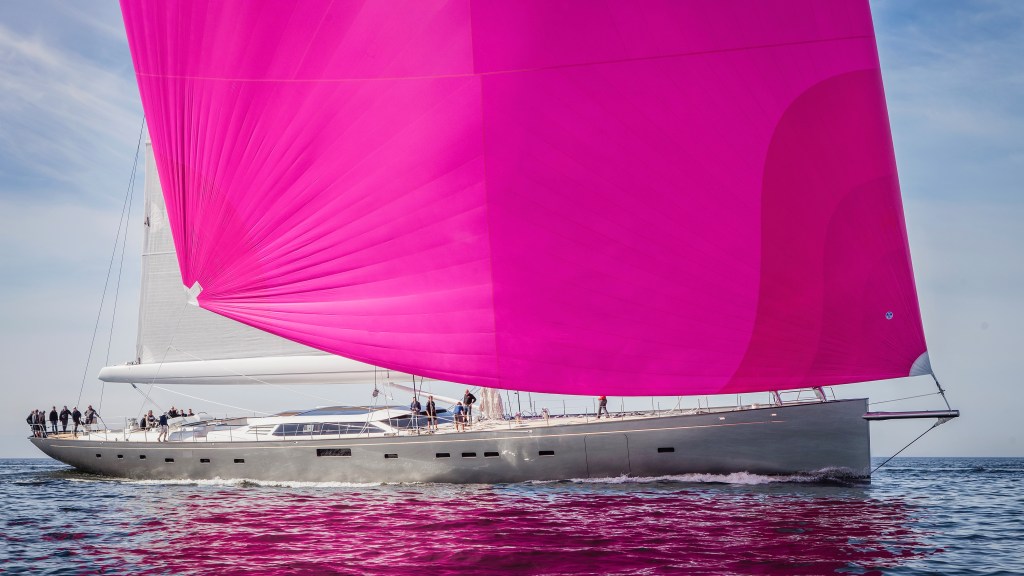 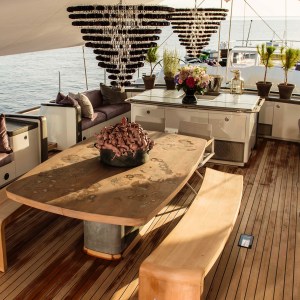 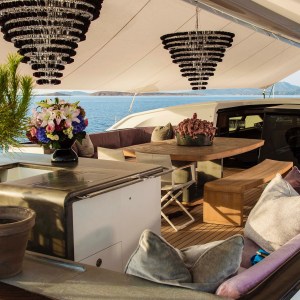 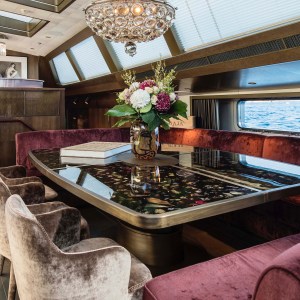 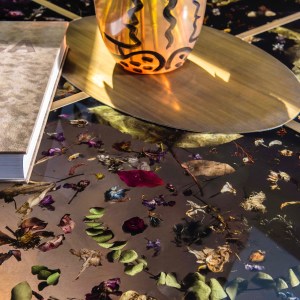 The 175-foot sailing yacht Pink Gin VI is a long, lithe beauty. The latest launch from Baltic Yachts is noteworthy for being the world’s largest carbon-fiber sloop, with upwind sails of more than 14,000 square feet, and capable of reaching speeds of 30 knots. Pink Gin is a strong, stable-looking yacht with twin cockpits that stand out for their purple-cushioned seats. A closer look reveals pewter furniture that weathers gracefully, a capstan made of ancient bog oak and pewter, and crystal chandeliers that hang from the boom during social events.

These details are just hints of the pleasure palace inside the carbon-fiber hull. Elegant, organized chaos might be the best way to describe Pink Gin VI’s interior, with arguably the most unusual collection of features and materials of any yacht that launched at the Monaco show.

Mark Tucker of Design Unlimited says it took five years for the owner to go for the sketches he presented when the sixth model of the Pink Gin series was first discussed. Since then, Pink Gin VI has adopted items like a purple player piano, an 8,500-year-old bog oak dining table, velvets, leather book covers, pewter, salmon skin, Italian plaster, and dozens of other features that give the yacht its distinctive identity. “People either love or hate the interior design, but once on board, they all understand it,” says Tucker.

Pink Gin VI’s owner had originally requested an interior similar to the last Pink Gin, says Tucker, “but better.” Tucker, who also designed the interior of Pink Gin V, came up with multiple concepts. “But as we presented the different interior options, he realized that he liked the initial sketches. The new interior captured his thoughts and feelings much more accurately.”

Tucker, who has worked with the owner for 16 years, has gotten to know the owner quite well. “He coined the phrase ‘Pink Gin lifestyle’ to reflect the fun and joie de vivre that he wanted his last six yachts to generate,” says Tucker. “He wants anyone who comes aboard to feel like they can really relax. He also wants guests to touch everything, rather than treating the saloon like a display in a museum.”

The tactile attractions are apparent in every room, which all have different themes. The saloon desk is covered with laser-cut stingray skin and its drawers lined with suede. The owner’s cabin has a wall made from Cuban fishing boats and his bed is surrounded by hand-carved bamboo and a leather head board. The pillars beside the staircase are covered in salmon skin, while dried flowers and foliage in a semi-translucent resin table by Dutch artist Marci Rusak sit near the dining area. The keel box and some bulkheads are covered by leather-bound book spines.

The owner wanted to keep several items that were in his previous yacht, including a Louis Vuitton trunk and crystal chandeliers of Murano glass made by a Parisian lighting company called Veronese. Beyond those, Tucker designed the interior down to the smallest detail, including buttons on some of the dressers that serve as knobs.

As the yacht was being completed, the owner wanted several details that had not been in the original brief. “He decided on his 51st birthday that he wanted a player piano on board,” says Tucker. “Those ideas might sound crazy but they came from an owner who is an experienced yachtsman and knows what he wants. When he’s on board, he hires a singer and piano player, so it’s not just a conversation piece.”

The Edelweiss Sygnet piano, built with a custom lilac color, has keys made of the same 8,600-year-old bog oak as the dining table. Baccarat chandeliers hang over both table and piano. The bog oak was carefully sourced after the designers rejected teak and other woods as not having the personality they wanted for the interior. Eventually, they found an ancient piece in Croatia with a dark, solid grain without blonde streaks found on most bog oak. The table goes well with the smoked-oak floors, which were painted gold, then silver, and then sanded for a distressed look, revealing layers of colors.

Though materials come from many sources, Design Unlimited did an excellent job matching them throughout the interior. Nothing looks out of place or disjointed, but keeps the elegant flow. “I think we got it just right,” says Tucker. “Nothing’s offensive or garish, and there’s emotion running through each room. It feels homey. Most important, it’s what the owner wanted. He loves spending time aboard Pink Gin VI. He loves it so much that it’s sometimes hard to get him off the boat.”