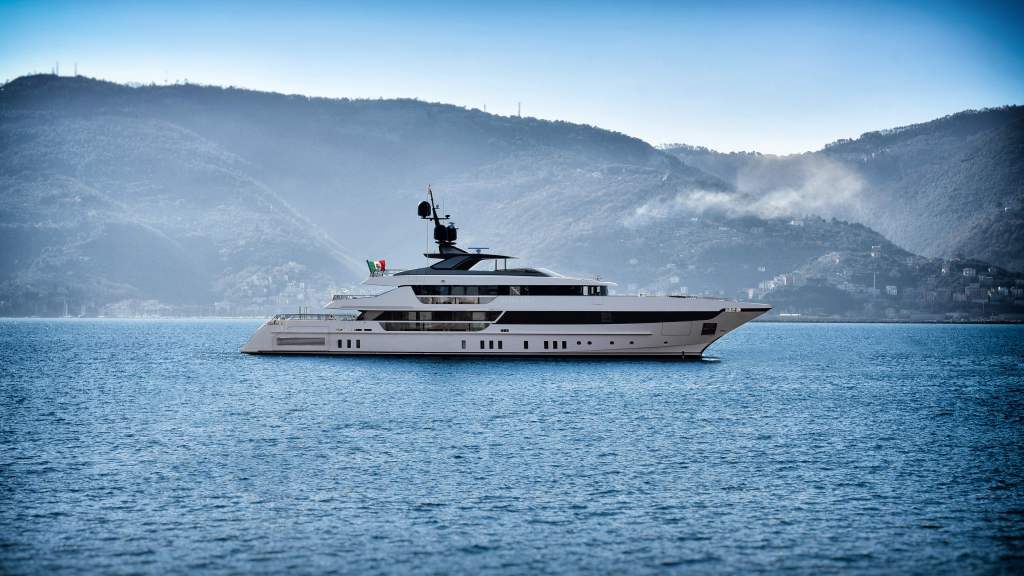 Sanlorenzo’s new 171-foot superyacht 52Steel, christened Seven Sins by its Belgian owner in January, had a media debut at the Yacht Club de Monaco over the first weekend of June. The Italian builder has been launching some interesting superyachts from its new La Spezia facility, including the 460Exp explorer yacht last month, but Seven Sins is the largest to date. Beyond size, the yacht also has several unique, gee-whiz features that lift it into a category of one.

The magic happens at Seven Sins’ stern. The cover at the transom elevates on a hydraulic lift to reveal the tender garage, which is then flooded, allowing the tender to float out into the water. A flooding transom, by itself, is not unique. Several other yacht builders have employed that technology for five years now. Along both sides, bulkheads fold down to become open terraces, while the swim platform also raises to become a third terrace on the water. Where Seven Sins really differs is the connection between the lower deck and the deck just above. With the tender deployed, the ceiling above the garage descends in panels to become the covered floor of the beach club. Turning the ceiling into a teak floor is impressive enough, but the new ceiling is now the transparent bottom of the swimming pool on the deck above. Eventually, the beach club transforms into a fully equipped gym, with light dancing through the pool floor above. Beyond the technical achievement, this setup has to be the world’s coolest skylight.

The six-stateroom yacht has other bespoke features: Floor-to-ceiling windows in the saloon on the main deck and the smaller saloon on the deck above allow exceptional natural light into both spaces. Low cabinetry in the main saloon divides the open-plan area into discrete zones without walls to give privacy but leaves the sense of space. The owner also opted for the dining area to be part of the upper saloon rather than the main saloon, mostly for the beautiful view. In the main-deck lobby, a glass case housing the owner’s artwork is enclosed in the Carrara marble staircase.

Seven Sins’ main-deck owner’s suite includes a private office and full-beam bedroom. The en-suite bathroom includes marble sourced from the same quarry where Michelangelo selected his stone from for many sculptures. On the deck below are four more staterooms (two VIP and two doubles), while the sixth is on the bridge deck. There are also quarters for 10 crewmembers.

The yacht’s twin MTU 12V 4000 M63 diesel engines give the vessel a 17.5-knot top speed and 15-knot cruising speed, with a 4,000-mile range. Seven Sins will make its first public debut at the Monaco Yacht Show in September.