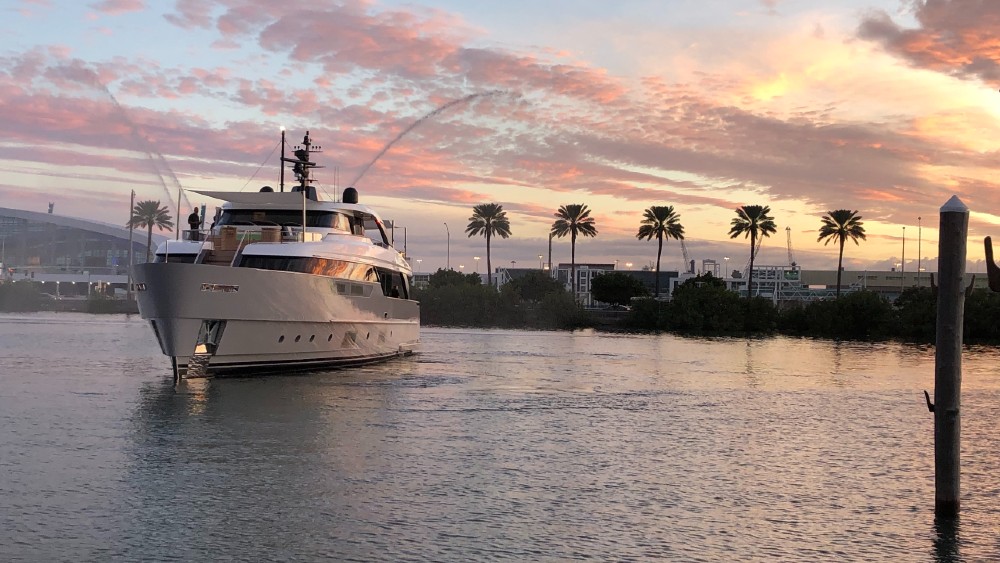 Most yacht owners do their best to stay out of the limelight, but Jorge Garcia actually had a fireboat precede his new Sanlorenzo SD96 Legacy to his Miami Beach home recently, with sirens blaring and water cannons shooting jets of water 30 feet into the air. A serial boat owner, Garcia’s goal was to create a grand entrance for the boat in front of his family and friends. It was also a housewarming party of sorts, with a band and dinner, since Garcia had only recently purchased the waterfront home, with its 100-foot-long dock.

The Miami businessman is no ordinary South Florida boat owner. His family emigrated from Cuba around 1980, with nothing but their clothes. Garcia remembers his parents cleaning hotel rooms in South Beach to make enough money for food after their arrival. Through a combination of grit and foresight, he built up a network of medical offices with bi-lingual doctors around central Florida. He recently sold the business and decided to step back and enjoy life with Legacy.

The new Sanlorenzo was a step up for Garcia, who had owned a series of ever-larger boats since the time he stayed on a friend’s 88-footer 15 years earlier. He was smitten. “I went on board and they had crew with uniforms standing there to greet us,” he told Robb Report. “It was the first time I’d been on a boat that size and I was so excited I couldn’t sleep that night. I told myself I have to get one someday.”

“One” turned out to be a half-dozen, starting with 29-foot cruiser with a single engine, followed a few years later by a Sea Ray 34 Sundancer, a 50-foot Beneteau cruiser and 67-foot Prestige motoryacht. “I’d never had a boat with a flybridge before. ‘Now, I have two floors, and can get plenty of fresh air and use the barbecue,’ he says. ‘It was amazing.’”

Two years ago, he purchased a Sanlorenzo 88SX with a large beach club on the back. He named it Dynasty and used it for cruising around Biscayne Bay and the Keys.

Then came the much larger and more voluminous Legacy, which has three decks. Garcia and his partner Cesar worked closely with Sanlorenzo’s design team on a style-heavy customization. That involved knocking down non-structural bulkheads to create more open space, while adding a glass wall along the stairway to the lower deck. It meant adding a Jacuzzi to the forward section of the flybridge so Garcia and his guests would have an exceptional view forward. Instead of formal dining room, he opted for a dining table for 10 and bar on the cockpit so that large groups could dine alfresco. For the interior, there are white leather panels on the ceiling in the main salon and master suite.

All the décor, down to the main-suite drawer knobs, came from the top of Sanlorenzo’s options list. It’s easily the most customized SD96 the Italian yard has built.

Since Garcia plans to use the boat for extended cruising, Legacy also has extra refrigerators, icemakers and wine coolers. The upgrades also include two super-sized watermakers to supply the five heads and eight showers on the boat. He also went with the upgraded 1300 hp MAN diesels for extending its range and increasing the top speed to 17 knots, as well as adding more electronics to the pilothouse.

A hands-on owner, Garcia went through every option on the list, from the salon to the engine room, to gain an understanding of how each component might impact life on board. “It’s a much more complicated boat than anything I’ve ever owned,” he says.

Legacy on its voyage to the owner’s home.  Courtesy Michael Verdon

The flybridge with Jacuzzi was the second outdoor social area, a bit more intimate than the main salon/cockpit on the deck below. “I like to have some of the entertaining areas outside, while also having more formal areas like the salon where you can sit down and have a conversation in the air conditioning,” says Garcia.

The interior is all light colors—often white—that gives it a spartan, contemporary feel. (Garcia warned his guests at the party to avoid sitting down or touching anything on the new yacht since he hadn’t had the chance yet to use it.) The boat has four staterooms, including a full-beam main, and quarters for five crew.

Unlike most owners who may spend a week or two on their yachts each year, Garcia plans to use his. The shakedown cruise this spring will be five or six weeks, departing Miami to the Dominican Republic, then heading south to Puerto Rico, before heading for the BVI, St. Martin’s and St. Barth’s.

The dining area connected to the cockpit on the upper deck.  Courtesy Sanlorenzo Yachts

Bernardo and Martina Zuccon of Rome-based Zuccon International designed the SD-96 for livability. “The world of small ships like these are complex because their owners live at sea for long periods of time,” Bernardo told Robb Report. “They often can’t be satisfied by yachts of the same size, but of different types. We had to rewrite the design rules on this to satisfy their demands for volume and multi-functionality.”

Despite its mission as a liveaboard cruiser, the brother-and-sister design team made sure the SD-96 had the contemporary Sanlorenzo look, with plenty of glass along the main deck and on the flybridge.

Will Legacy be his last boat? Garcia plans to enjoy the SD96 for now, possibly cruising the Med after his Caribbean trip. But he also notes that the house beside his recently came up for sale, so he purchased it. “That will give us 200 feet of dock space,” he says.