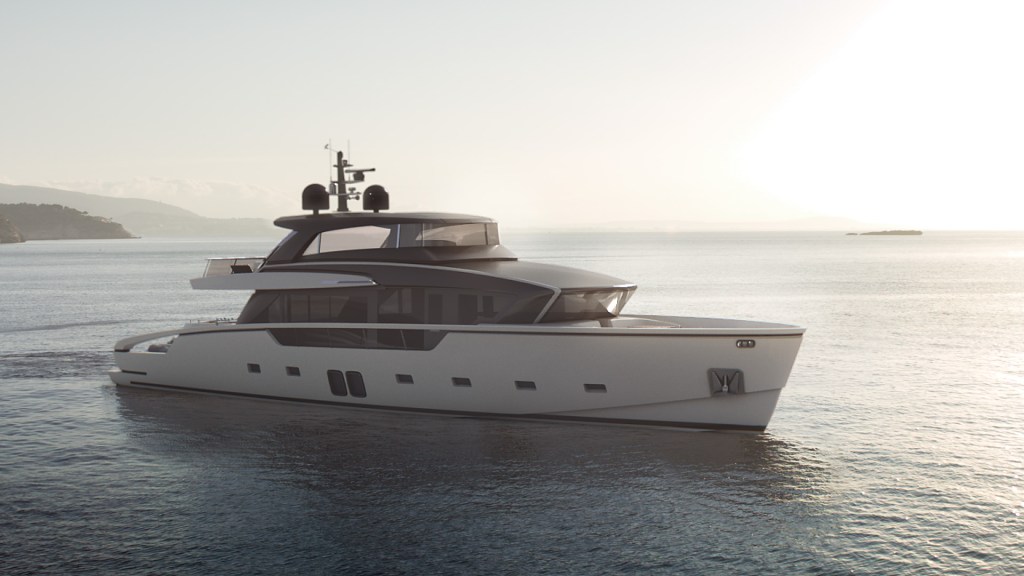 Sanlorenzo’s new SX88 promises to be one of the more interesting debuts at this year’s Cannes Yachting Festival in September. The 88-foot yacht, recently unveiled the Milan Triennale Design Museum, pushes the definition of crossover yacht to its extreme. The new “social boat,” as its interior designer describes it, blends flybridge styling with an explorer hull and an open transom.

The high, protected bow has explorer DNA, while also allowing the side bulwarks to taper downward as they move aft toward the transom. The open, 323-square-foot rear cockpit converts into a beach club, space for tenders, or just open deck, with the tender crane hidden in the side rails. On the flybridge, the aft section is also open for great views or alfresco dining, while the space under the hardtop, which can be enclosed and air-conditioned, has the yacht’s sole helm station.

The convertible interior is where the new Sanlorenzo SX88 really shines. Owners have a choice of either opting for a rear saloon and master suite forward, or leaving the whole area open-plan. Because the helm is on the deck above, and the galley is open, the main deck is wide-open space from stern to bow. Floor-to-ceiling windows and no interior bulkheads also minimize the divisions between the interior and exterior. “I keep picturing boats, even very large ones, as if they were lofts—that is, very open, highly livable spaces—which make it possible to be in contact with what’s around us,” said Piero Lissoni, the interior designer.

The loft idea even translates to the furniture. Unlike most yachts, where fixed furniture is placed strategically, the SX88’s freestanding tables, chairs, and loungers are spread about like a beautiful home. The galley and en-suite bathrooms were developed in collaboration with Boffi. Owners who want the master-less main deck can choose between a four- and five-stateroom configurations on the lower deck.

While the carbon-fiber superstructure is light and airy, Sanlorenzo designed the fiberglass hull like an oceangoing sportfisherman vessel, even going to the point of tank-testing it in the Netherlands. The boat, with twin IPS 1200 drives, is expected to top out at 23 knots. Rina’s “Green Class” designation is partly due to the onboard lithium battery system, which runs the house systems for four to eight hours with zero emissions.

Sanlorenzo is trying to reach a new, younger client with the SX88, which is the first of several in the new line, by appealing to a land-based design. The idea is clearly successful since the Italian yard has already sold six SX88s, months before the first will be shown at Cannes.