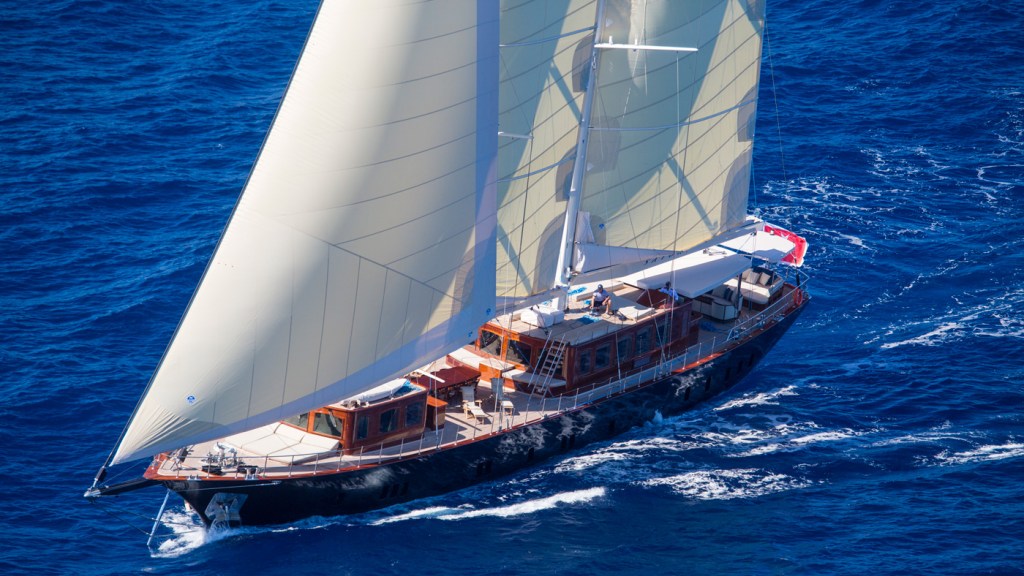 An aquatic conveyance reminiscent of those built early last century by the likes of moguls J.P. Morgan and Cornelius Vanderbilt, the 136-foot sailing yacht Satori is a contemporary example of bygone grace. The recently launched wooden schooner was created by Danish designers Claus and Jeanette Thottrup and their team at Big Blue Yachting in Bodrum, Turkey. But the Thottrups didn’t just build the beauty, they own it. And they’re willing to share.

Available for charter, the Satori houses numerous layers of luxury within its hull and superstructure, both made of mahogany. Up to 10 passengers may be accommodated in five guest cabins, including the 387-square-foot master suite (complete with a bathroom with freestanding walnut tub and marble double shower). In addition, four other en suite quarters comprise two that measure 161 square feet and another two at 118 square feet. Each comes with personal entertainment accoutrements, such as Apple TV, a sound system, an iPad, and wi-fi Internet access.

Satori sates any appetite with its comprehensive open-view galley and a culinary menu managed and presented by chefs from Michelin-starred Meo Modo and La Bottega del Buon Caffè in Italy. The restaurants are part of the Borgo Santo Pietro Group, a collective of distinctive dining and hospitality operations that are also owned by the Thottrups. Complementing the stellar cuisine is wine from Satori’s climate-controlled 250-bottle cellar.

The senses can continue to be stirred at the onboard spa complete with dedicated treatment space, a steam room, and the option of a personal therapist. Further amenities include a 376-square-foor main salon, two bars, an outdoor cinema, and ubiquitous daybeds for devotees of the sun.

The dining menu aboard Satori is managed by a team from two Michelin-starred restaurants in Italy.  Photo: Courtesy Borgo Santo Pietro Group.

When it’s time to get wet, a wealth of water toys await. These include jet skis, kayaks, a sailing dinghy, water skis, wakeboards, and snorkeling gear. Ports-of-call can be accessed by the 18-foot DieselJet 565 tender. And once on land, Gocycle G3 electric bikes allow ease of exploration.

Capable of voyaging completely under sail, the luxury vessel is also powered by two 440 hp, Volvo Penta diesel engines that provide a cruising speed of 12 knots and a top speed of 14 knots. It’s a propulsion system perfect for the ship’s customizable itineraries in the Mediterranean Sea.

To commemorate the debut of the Thottrup’s yacht, the couple have created the Ultimate Celebration experience that features a three-night stay at their boutique hotel in Tuscany—the 16-room Borgo Santo Pietro—and four nights aboard Satori.

The land-based presentation includes a tour of Borgo Santo Pietro’s 200 acres, lunch at its Trattoria sull’Albero restaurant, a guided tour of local landmarks, winetasting at the Ornellaia Estate, a lesson at the Borgo Cooking School, and dinner at chef Andrea Mattei’s Michelin-starred Meo Modo. The Satori portion of the package involves a cruise of the Tuscan Archipelago, comprising the islands of Elba, Giglio, Giannutri, Capraia, Montecristo, Pianosa, and Gorgona.

Priced at approximately $123,300, the Ultimate Celebration package is being offered from August 6 through 13, and August 28 through September 30, 2017. Next year, availability will run from June through October.