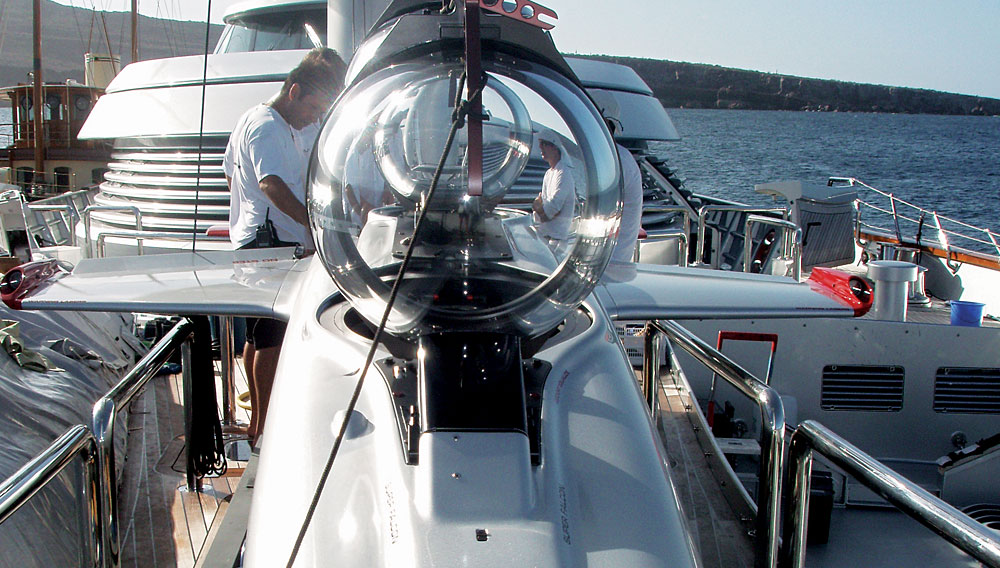 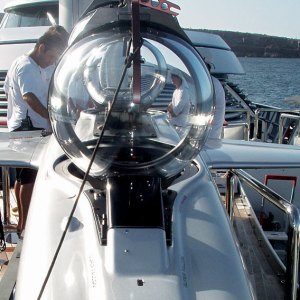 “I don’t think I’ll ever build a better sub,” says Graham Hawkes a few days prior to the official debut of the Super Falcon, a two-person submersible that the 61-year-old British-born inventor has worked tirelessly to build. Sitting in his modest office in Northern California, Hawkes seems more like a man on a mission than an entrepreneur with a sales pitch. “We’re trying to get access to a beautiful world that’s been largely forgotten,”

he says. “It would be nice if I can use it to help bring poets and politicians down, so they can spread the word and change the world.”

Such aspirations are noble, but if in the meantime anyone with an extra $1.5 million wants his or her own personal shark-stalking machine, Hawkes will happily accommodate that request as well. He has poured more than $5 million into his submersibles project, which he calls Deep Flight, over the past few decades—selling prized possessions and raiding college funds to keep things going. Now that this design is complete, Hawkes hopes to recoup his investment by targeting customers in recreation and scientific markets, as well as the military. To date he has one buyer, Silicon Valley investor Tom Perkins, whose purchase helped pave the way for the sub’s development.

Much like San Francisco’s ultra-green, high-tech California Academy of Sciences, where the Super Falcon made its debut in May, everything about this submersible is state-of-the-art. Lithium-ion batteries power a brushless electric motor that can propel the craft for 20 nautical miles and to a top speed of 10 knots. The Super Falcon’s sleek lines, which recall those of a Formula One racer, are adorned topside by two acrylic bubble-top hatches that swap the usual limited porthole view for a broad panorama of the deep. But the Super Falcon’s true genius lies in its positive buoyancy. Hawkes borrowed from established airfoil principles to design wings that urge the sub down and allow it to glide about the oceans at depths as low as 1,000 feet. The inventor grins broadly as he recalls a test run with Perkins’ new toy off the coast of Baja California, Mexico, where he managed to slip just behind a school of hammerhead sharks. “I got to stalk the stalkers,” he says.

If you ask Hawkes about the design of the Super Falcon’s underwater wings, he will reply in a humble, almost shy manner. “The Wright brothers already did all of the work,” he says. “I was actually lucky I didn’t go to a fancy school like M.I.T., but instead went to a small place in London. We didn’t have wind tunnels, so we had to use water to explore aerodynamic effects. It was back then that I realized, Aha, what you do in the air you can do in the water. So I guess that was the start of all this.”

The Super Falcon was born in the unassuming workshop at Hawkes Ocean Technologies in Point Richmond, Calif., which is just across the bay from San Francisco. The staff here consists of Hawkes; his wife and business partner, Karen; and a couple of fresh-faced engineers who look as if they could be the boss’s grandchildren. Throughout the facility, mementos of Hawkes’ aquatic passion are strewn about: undersea craft of various shapes and sizes, each representing a step in the inventor’s journey. Hawkes began working on the Super Falcon in 2007, but by that time, the idea behind the project was actually decades old. “In the 1980s, I was building subs for the French television station Canal Plus,” he recalls. “I was down in the water off Nova Scotia, and I saw a crab ambling slowly along the bottom. It occurred to me at that moment that I am just like that crab: I have no freedom to master this space,” he says. “So later, I sat on a rock in Halifax Harbor and sketched something that could allow me to move with the ease of a dolphin.”

At that time, however, technology did not readily support Hawkes’ vision. Specifically, pressure hulls were still too cumbersome and internal mechanisms too unwieldy to work effectively in small, nimble craft. By a twist of fate, in the late 1990s, Hawkes connected with the late adventurer Steve Fossett who was, at that time, determined to reach the ocean’s deepest point in a one-person submersible craft. Hawkes was both intrigued and energized by Fossett’s quest, and soon the two began working to develop the Deep Flight Challenger, a submersible designed with a tubular composite hull that could withstand the tremendous pressure found at depths of 37,000 feet. Unfortunately, Fossett died in 2007 when his plane crashed in the Sierra Nevada. The Challenger project was terminated shortly thereafter (the sub now collects dust in a corner of the Point Richmond workshop), but Hawkes’ joint effort with Fossett did eventually bear fruit: He was able to use the Challenger’s breakthrough hull design and custom miniaturized components in the Super Falcon. “It helps that we’ve made big leaps with science and technology,” Hawkes says. “In the old days, gauges were huge; they would never fit in the Super Falcon. Now, they’re small and elegant.” In fact, many of the controls in Hawkes’ submersibles are made of glimmering stainless steel or custom carbon fiber. Very little was outsourced, as most of these one-off pieces had to be built by hand. “It’s jewelry, really,” Hawkes says with a smile. “Tom Perkins demanded an artful execution.”

Elegant hardware aside, it is the Super Falcon’s underwater performance that makes the craft truly notable. “Flying this thing was unbelievable,” says chief electronics engineer Charles Chiau, who helped Hawkes design the sub’s battery-recharging system. Hawkes let Chiau take the controls during the Perkins preliminary test run last November. “I fly radio-controlled planes, and piloting this sub was absolutely no different than that,” Chiau says. “Just a touch of your finger and it can slip this way and that.”

The Super Falcon’s debut at the California Academy of Sciences was a triumph: Attendees ogled, the press swooned, and Hawkes basked in the moment. “There are a number of billionaires interested [in taking a ride] also, such as Sir Richard Branson,” he says, already planning the next phase of his obsession. “Personally, I’d love to build three-person Super Falcons that can take people down in formation to explore. Wouldn’t that be cool?”