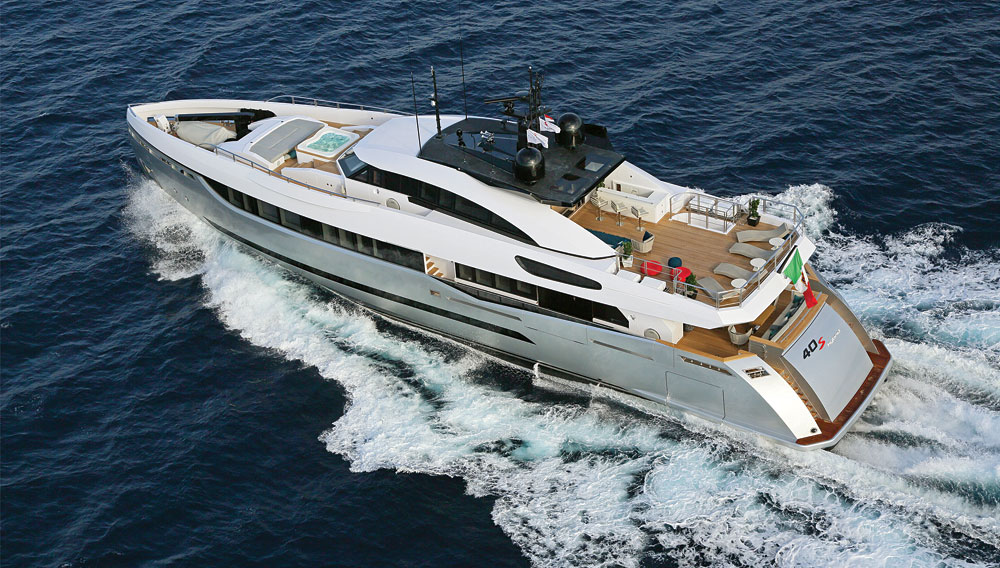 Most yacht owners like the idea of eco-friendly design, but in practice few are willing to sacrifice comfort or performance in the name of cutting fuel consumption. The Columbus 40 S Hybrid—a versatile new 131-foot model from Italy’s Columbus Yachts—may quell any such concerns with a space-saving design and a range of possible speed-and-efficiency combinations.

A subsidiary of the 47-year-old family-owned Palumbo Group of Naples, Columbus Yachts launched the first example of the 40 S Hybrid last year. The aluminum vessel uses a hybrid propulsion system that combines two 1,920 hp main engines with two 80 hp electric motors and three diesel generators. Its relatively low carbon-dioxide emissions at low speeds, along with design elements such as sustainably sourced interior woods, have helped make it one of the first motor yachts designated by the Italian classification society RINA as Green Star Plus Platinum, a rating based on overall environmental impact.

With a top speed of 22 knots, the 40 S Hybrid also earns high marks for performance. The yacht cruises comfortably at 15 knots, a rate at which it consumes about 58 gallons of fuel per hour. But at 8 knots—when the boat can rely wholly on the exceptionally quiet electric motors and diesel generators—consumption is cut down to 15 gallons per hour.

While it diminishes fuel consumption, the 40 S Hybrid maximizes the amount of usable space for guests. Hybrid propulsion systems are typically bigger and heavier and have more moving parts than conventional motors, presenting an engineering challenge for designers. Columbus addressed the problem by making it possible to monitor the boat’s inner workings from the bridge, thus eliminating the need for a full-time crew member—and the space he or she would require—in the engine room.

With this gain in space, the inaugural example of the 40 S Hybrid sleeps as many as 10 guests in five staterooms, including an owner’s suite with a king-size bed, two sinks, and a spacious glass-walled shower. (The vessel also accommodates as many as seven crew members.) The Milan-based Hot Lab Yacht and Design conceived the interior in collaboration with Columbus Yachts’ interior-design team, outfitting it with marble surfaces, stainless-steel fixtures, oak floors, and a custom dining-room table that seats up to 10.

A second 40 S Hybrid hull, technically identical to the first, is currently under construction in Naples. Buyers of the yachts, which have a starting price of about $22.5 million, can choose from a variety of hull colors, including a sleek metallic silver. Columbus says it can also customize both the propulsion system and the yacht’s interior, ensuring that owners obtain their ideal boat without making sacrifices.