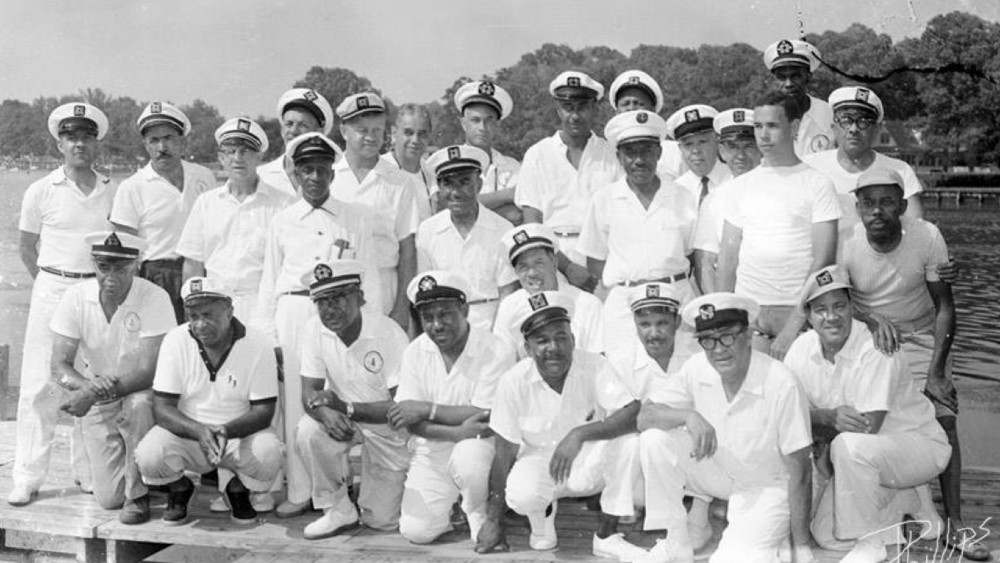 In 1959, four Black men who were boaters in Washington, DC, decided to take their love of the water to the Chesapeake Bay. Joseph Barr, Hugh Dowling, Ellsworth Randall and Albert C. Burwell had been part of the Seafarers Boat Club on the Anacostia River, but wanted to take advantage of the Chesapeake’s much larger cruising grounds. They decided Annapolis should be home port. But the doors of local yacht clubs were closed to them and marina owners refused to sell Black captains fuel.

Undeterred, they created the Seafarers Yacht Club, one of the oldest Black yacht clubs in the US. At first, they met in each other’s homes. Later, the group rented a small storefront in downtown Annapolis. In 1967, they purchased an abandoned, two-room 1918 schoolhouse—the first elementary school for Black children in Annapolis’s Eastport area—and turned it into a clubhouse.

The founders organized cruises where service providers welcomed them, hosted cookouts when they couldn’t dine in restaurants, and built a swimming pool at the back of the clubhouse. Over time, as SYC grew, its mission to enjoy boating transformed into something larger, with a community-service focus that included teaching at-risk youth how to swim and boat, hosting dinners for seniors, and setting up the city’s first Sea Scouts program—think Boy and Girl Scouts on the water.

Community service has become a primary mission of the yacht club. Its programs range from summer camps to teach seamanship and swimming to local youth to a Sea Scouts chapter that has seen one member enter the US Naval Academy.  Courtesy Seafarers Yacht Club

Capt. Ade Adebisi, SYC’s immediate past commodore, has seen the club mature since joining in 2001, both in membership, which has seen an 80 percent turnover in the last 20 years, and focusing on the local community.

Adebisi first learned of the club through a chance encounter. One day out cruising, he and his family came across Dr. William Woodward, their family dentist—who, unbeknownst to Adebisi—was the club’s then-commodore. After being invited to meet the members, Adebisi never looked back. “These are accomplished individuals who come together and work towards a common goal and support one another,” he says. “We’re not just yacht-club members, we’re friends.”

The club now has 76 members, who own multiple boat types, from kayaks to cruising sailboats to 60-ft. sportfishing machines. During the summer, flotillas of member boats cruise the Chesapeake, or do weekend trips to destinations like Baltimore’s Inner Harbor. On more somber occasions, the group wears the club’s dress whites to member funerals. While the founders were all working-class men, today’s group is more demographically and racially diverse, comprised of business owners, professionals and military officers. The club’s female members are also active in running the organization, with many serving as board members.

Over the years, the club has seen business owners, professionals and military officers join its ranks. That’s reflected in the members’ boats.  Courtesy Seafarers Yacht Club

Adebisi says the club has made him a better boater, since many of the more seasoned members provide seamanship and boat-handling advice to others. “As a new boater, you’re just learning to deal with all the challenges that come with the water,” he says. “Now, you have other people around to gain experience from, and share stories.”

The current commodore, Capt. Benjamin McCottry, says camaraderie is one of the club’s main strengths. Officially, he’s been a member for six and a half years, but has been around the members “practically all my life,” back to when the 70-year-old was a child.

McCottry is most proud of how the organization gives back to the community. It hosts an annual Thanksgiving Day dinner for seniors, for instance, and uses a donated 28-foot powerboat to teach seamanship skills to local youth.

In fact, the youth programs are of particular importance to McCottry and his fellow members. Since its early days, the Seafarers Yacht Club has provided swimming lessons in the club pool as part of a two-week summer program that also includes boating education.

“Drowning is the second-leading cause in the country of accidental death in children 12 and under,” McCottry says. “Not only do the kids learn how to swim and save themselves, but they also learn how to save somebody else—without endangering themselves.” Many of the youth, he says, come from homes where no one can swim.

The swimming instruction, as well as STEM-related programs and even chess lessons from a chess master to promote critical-thinking skills, all target local children ages eight to 12. They’re overseen by the club’s non-profit arm, the Seafarers Foundation. Older children aren’t forgotten, with the Foundation further overseeing the first—and only—Sea Scouts unit in Annapolis. Sea Scouts is a program of the Boy Scouts of America for male and female teens ages 14 through 20.

A group kayak around the harbor in Annapolis.  Courtesy Seafarers Yacht Club

The Seafarers Yacht Club established its unit, Sea Scout Ship 1959, in 2019. Not only has it become one of the fastest-growing units in the nation, attracting nearly two dozen members, but also it received the prestigious National Flagship Award last summer. This recognizes outstanding program quality, youth achievements, and adult commitment. One member has gone on to attend the US Naval Academy.

“It’s doing rich work,” says Major General Errol Schwartz, the Seafarers Foundation president. What’s more, he sees opportunities to expand that rich work. He and his colleagues are exploring ways to offer programs year-round, plus close the age gap between those programs and the Sea Scouts.

Additionally, he wants to focus on health issues, especially in light of the pandemic. “We want to hear from the youth,” Schwartz says. “They’ve been pent up in this Zoom environment for two years. What are some of the things that are affecting them, mentally or otherwise?”

Whatever it ultimately does, this “tight-knit family,” as Schwartz calls the Seafarers Yacht Club, will continue to honor its past. “Let’s not forget the people who got us here,” adds Adebisi.

Some of the original members are still alive and the work they did to buy and renovate that original two-room schoolhouse laid the foundations for today’s thriving club. “It’s important for us to maintain that history,” says Adebisi. “We’re proud of it.”