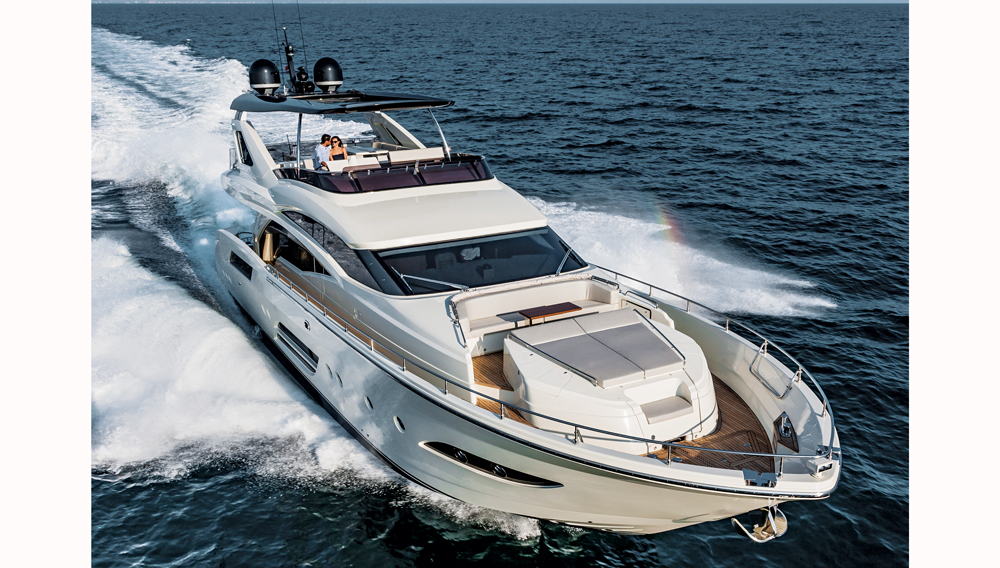 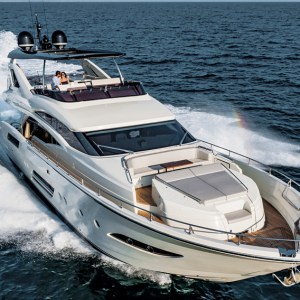 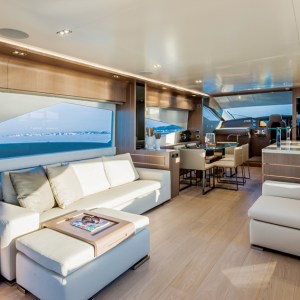 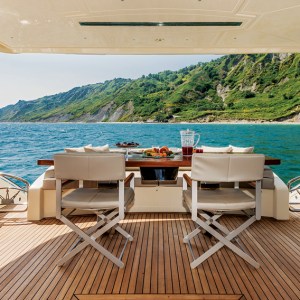 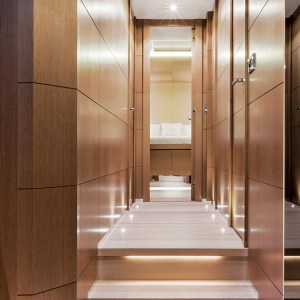 The completion of a model line’s second hull usually is not especially notable, not when interior colors and design materials are all that distinguish the follow-up from the first. But the May launch of the second Dominator 800S—from the Dominator shipyard in Fano, Italy—was deemed worthy of a media event that included a cruise lasting several hours and an opportunity to meet the yacht’s owner. He told the boating writers that he was drawn to Dominator because the company was willing to work with him to create a highly customized yacht.

The company did just that. Compared to the first Dominator 800S, which was delivered to its owner at the Miami International Boat Show in February, the new 80-footer weighs nearly 7 tons less because of its carbon-composite hull, superstructure, and hard top. It is powered by a completely new propulsion system.

“For each yacht we produce, we always seek to perfect, improve, and update,” says Dominator International’s CEO, Alex Lenghein. “We don’t build 10 of the same specification and then try to find customers for them. When a customer chooses a yacht from our range, we sit down with them and discuss the latest technology.”

The latest technology for the Dominator 800S includes the Fortjes 4000 propulsion system from the German manufacturer Reintjes and a Humphree stabilization system. With these systems, the Dominator 800S can reach a top speed of 35 knots, cruise at 26.5 knots, come on plane in less than 2 seconds, and turn with the agility of an express cruiser.

The yacht’s owner said he and his captain regularly visited the Dominator boatyard during the 18-month build cycle. “They know Fano better than anyone now,” jokes Angela Pernsteiner, Dominator’s head of design and development. During that time, the two added unusual but handy features such as an iPhone charger on the exterior bow social area and a water-softening system.

The owner also worked closely with the designer Alberto Mancini on the interior, which features light oak walls, cream-colored Botticino marble, and custom furniture from Minotti. “We spent months in close contact with the owners,” says Mancini. “We wanted a nice, warm atmosphere—and not big contrasts—with tone-on-tone colors that included shades of beige, taupe, and gray.” The interior is unusually spacious for a yacht of this size: The saloon measures 15 feet across and has 6 feet 8 inches of headroom, and the master suite features a full-beam bathroom area. Large windows in the superstructure and hull sides allow natural light to fill the interior. The starting price for a Dominator 800S is available upon request.