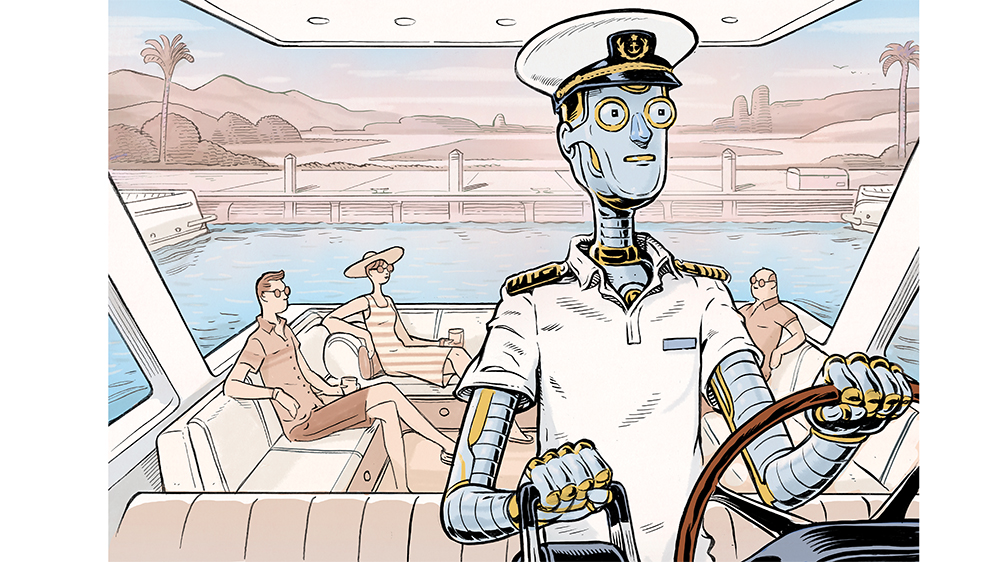 Sixteen years after Volvo Penta introduced its first joystick boat control, the yachting world is planning its next step toward autonomous piloting with assisted-docking systems. But don’t let go of the wheel just yet: The ability to have your boat automatically pull into a slip while you and your guests sip cocktails on the foredeck could still be 5 or even 10 years away.

“It’s coming,” Anders Thorin, Volvo Penta’s product manager for marine electronics, insisted to me back in 2018 during a stopover of the Volvo Ocean Race in Gothenburg, Sweden. He was at the helm of a fully self-docking Volvo-powered Azimut as it effortlessly eased itself between a pair of priceless race boats. That system, despite its flawless demonstration, wasn’t quite ready for prime time, but last year a pared-back version of Assisted Docking made its debut as an option on Volvo’s Inboard Performance System (IPS) engines, using a combination of IPS and GPS-based Dynamic Positioning System data along with information from steering, transmission, bow-thruster and engine controls.

The system neutralizes wind, tide and current, making docking in tight, gusty quarters less of a potential catastrophe (and giving newbie captains the type of confidence that’s usually developed only after years of embarrassing mishaps). Essentially, the joystick control keeps the boat moving, in a straight line or laterally, without it getting pushed around. When your hand comes off the joystick, the boat stops immediately rather than gliding into trouble; a Side Push button keeps it pinned against the dock without having to tie up.

“This is just like how automatic transmissions replaced the manual clutch on cars,” says Federico Ferrante, president of Azimut-Benetti USA. “We’re selling a lot of these on our Volvo IPS boats.” At the moment, the length-overall (LOA) sweet spot is from 30 feet to 60-plus feet but, as Volvo ups its IPS horsepower ratings, that could move to 80- or even 120-footers. Ferrante says the system is a natural fit for owner-operated boats but also makes sense for larger vessels, since there’s that much less need for a professional captain. “It would save a lot of cost to just have a deckhand,” he says.

According to Volvo’s Thorin, assisted docking is part of a company autonomy strategy that will next tackle collision avoidance on the way, eventually, to fully autonomous boats.

“There’s a lot of learning ahead before full autonomy becomes a reality,” says John Reid, vice president of enterprise technologies at Brunswick Corporation, the world’s largest marine company. Radar, GPS, electronic charts, Lidar, image sensors and more will be used to identify potential hazards, which means an enormous amount of data will need to be analyzed by onboard computers before coherent information is conveyed to the boater. Besides docking, he says, “approaching vessels, speed zones and submerged objects are other pain points that need to be addressed. The system needs to see hundreds of meters in all directions, filtering out the hazards.”

Brunswick already offers joystick docking, and according to company plans its ACES initiative—for Autonomy, Connectivity, Electrification and Shared Access—will eventually have 35 products. But like Thorin, Reid won’t reveal an internal timeline to full autonomy. “We’ll be delivering incremental enhancements to control the vessel,” he says. “But it will take time to go through production phases.”