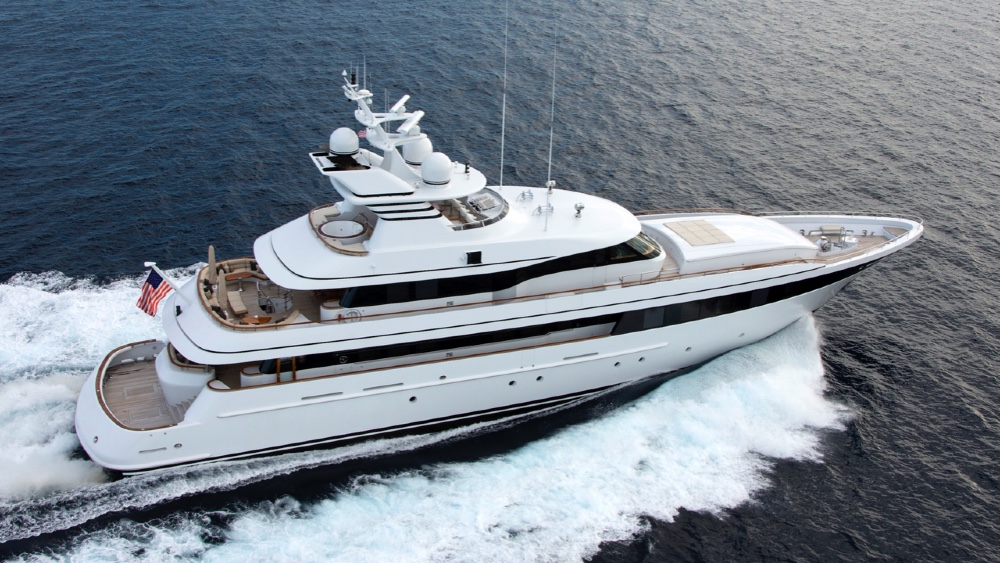 All Images Courtesy of Burgess Yachts

What do you get if you have two friends with a passion for boats, high-profile automotive careers and cash to burn? The answer is the 153-foot superyacht Excellence, a vessel that oozes speed, has brand pedigree and captures the hearts of all who own it.

Built in 2001 by Formula One racing car driver and automobile entrepreneur Roger Penske, who named her Detroit Eagle, the yacht combined Feadship’s Dutch craftsmanship with Penske’s own brand of engine. (Disclosure: Roger Penske is the father of Jay Penske, who owns this publication, as well as its sister publications in the Penske Media portfolio.)

“At the time [Roger] Penske owned a company called Detroit Diesel that made diesel engines for boats, and he was also involved with a company that built turbine engines,” current owner and Penske’s longtime friend, Herb Chambers, told Robb Report. “So, he went to Feadship and built a lightweight aluminum yacht with a shallow draft to demonstrate the capability of his engines.”

The Feadship was originally built and owned for years by Roger Penske, who wanted a very fast, very luxurious superyacht. Penske installed his own Detroit Diesel-branded engines and then added a 5,600-hp turbine to give the yacht a 10-knot pop at the top end.  Courtesy of Burgess Yachts

The immaculate, polished-chrome engine room, with the diesels painted in fire-engine red, has always been a symbolic indicator of the type of impressive speeds the yacht can reach. The engines are 16-cylinder 4000 series, which generate 3,650 horsepower each. Penske then added something the superyacht world had never seen before–a Lycoming TF-50 gas turbine for an additional 5,600 horsepower.

“The boat can cruise at about 23 knots on diesel engines,” Chambers says, “but if you really want it to go fast, you push a button and the turbine kicks in taking the boat from 23 knots up to around 33 knots. It really is a remarkable vessel.”

Serial boat builder Chambers grew up in the Boston area, spending long summers on the water at his grandmother’s cottage. “I always had the desire to have a boat,” he says, a goal he realized at 24 with a 30-foot Trojan flybridge motoryacht. The Trojan would be the first of five yachts called A-Copy, named after his successful copy-machine business.

“After I sold the copy company and had this windfall of money, I ordered a 127-foot Feadship. The name A-Copy wasn’t of any significance to me anymore so I tried to think of a name that I would like,” Chambers says. “I’m not an avid reader, but I read Tom Peters’s book In Search of Excellence and loved it. It’s about running a good business. I thought Excellence, that is a great name for a boat.”

To date, Chambers has owned more than 40 yachts of many sizes. Some were even sold before he took delivery. The name “Excellence” serves as a constant reminder to his 30-year-long captain for the need to maintain high standards on board, he says. It has also carried through to Chamber’s six most recent yachts. This includes his largest yacht to date, a striking 262-foot Abeking & Rasmussen launched in 2019, on which he enjoys cruising the European waters of Croatia, Greece, Italy and St Tropez. That Excellence won Robb Report’s 2020 Best of the Best award for interiors.

With its “eagle” reverse bow and triple-height glass atrium, the Winch-designed yacht turns heads wherever it goes. But that’s hardly surprising considering Philip Starck’s opinion-dividing Motor Yacht A was the design inspiration this latest Excellence.

While he has recently listed the Feadship “Excellence,” Chambers plans to enjoy the yacht for while he still owns her. He has often owned two yachts—the newer one that is often under charter, and a smaller, faster one that is at his disposal for his “personal use.”

While Chambers’s appreciation of Feadship has long endured after his first foray with the Dutch shipbuilder, it wasn’t until a 2018 visit to Fort Lauderdale Boat Show that Penske’s 153-foot yacht caught Chamber’s eye. Prized by Chambers for its flexible speed and six-foot Bahamas-friendly draft, it is one of the few yachts that he hasn’t put on the charter market.

“I view the Feadship as a very personal boat,” says Chambers. “It’s only a four-stateroom boat, but you can bring three other couples or family members with you. When I told Roger Penske that I had bought the boat, he said his family was mad at him when he sold it because they loved it so much.”

An extensive 2019 refit of the yacht includes a full paint job, an updated sound system and refurb of the original John Munford interior. Chambers bought the yacht for his own personal use. “Because my boats get chartered, I always love to have a boat that’s available just for me,” Chambers says. “I built a 94-foot Mangusta for that purpose and used it in America when my big yacht was on charter in the Mediterranean or Caribbean. The Feadship can do pretty much what the Mangusta did, but it’s a bigger, more comfortable boat, so I sold the Mangusta at the start of 2020.”

The 2001 build has undergone a complete refurbishment of the interior.

Being a serial owner, Chambers also recently listed the updated Feadship. He plans to enjoy the yacht while she is still available. Will he miss this Excellence?

“I really don’t know,” Chambers says, pausing. “I would maybe look to build a similar boat, around 150 feet, something that would be fast. But the Abeking & Rasmussen Excellence is still new to me. The time for me to sell a boat is when I still like it.”

Excellence is co-listed for sale with Burgess and Merle Wood & Associates for $16,900,000. Here are more views.