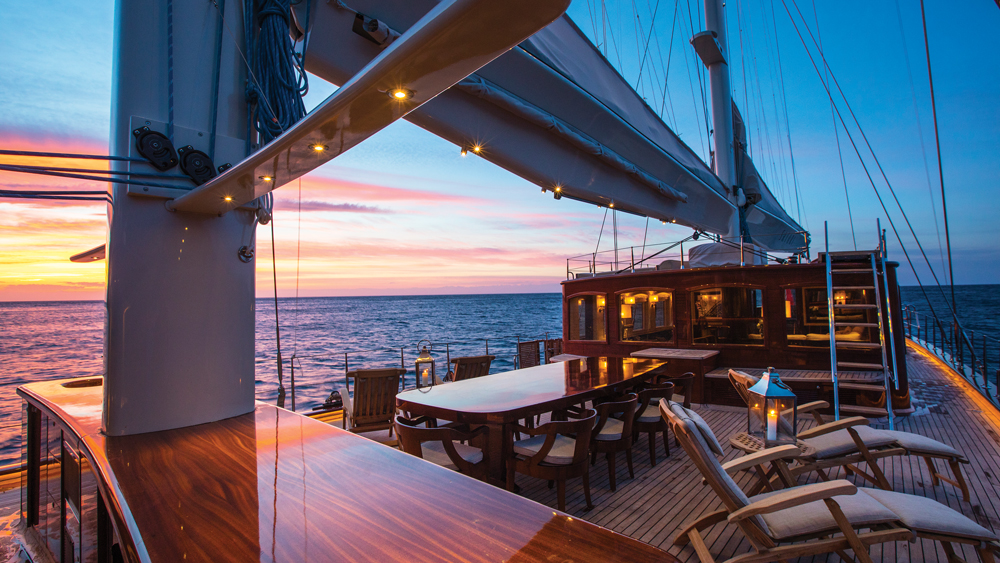 It’s our final morning aboard Satori, a newly launched 135-foot sailing yacht, and owners Claus and Jeanette Thottrup are apologizing for the weather—a perfectly balmy 76 degrees and sunny. “We’ve had such calm weather all summer, but winds are supposed to pick up in a bit,” says Claus, who, along with his wife, also owns the Borgo Santo Pietro resort in Tuscany. “If we leave by 11 am, we will miss them, but if we wait until 1, I’m afraid it might be uncomfortably choppy.”

Our one hesitation about heading to shore early is that we’ll miss a final meal by Andrea Mattei, the chef who took a break from his post at Borgo Santo Pietro to join us on board. Claus assures us, however, that instead we’ll find a lovely place for a late-afternoon lunch along the Tuscan coast. A half hour later, as we reach the harbor, the Tyrrhenian Sea begins to whitecap and swell, just as he predicted.

Sailing since he was a 4-year-old growing up in Copenhagen, Denmark, Claus has spent five decades navigating the seas. Jeanette, who also hails from Denmark, is not particularly fond of the pursuit, but she does share Claus’s affinity for Italy—a mutual passion that works to the benefit of their guests on land and at sea.

Indeed, even after a college semester spent in Siena and nearly a dozen trips to Italy since, I have never once heard of Follonica, the town where we’ve stopped for lunch. The charming seaside village—which claims the widest expanse of beach in all of Tuscany—is the kind of idyllic, undiscovered stretch Americans long to tell their friends back home about. Even better is to announce that you’ve been to its hidden gem of a restaurant, Oasi, which we enter moments before the kitchen closes after lunch.

As the only people dining, we quickly decide on three courses of crudo and house-made pasta with truffles and clams. The first two courses are divine. Claus inquires about the chef’s background from our server (who is also the chef’s wife), and when it is revealed that the Thottrups own La Bottega del Buon Caffee in Florence, the meal rises to new heights. Perhaps the chef is hoping that the Thottrups will elevate his career as they did that of La Bottega’s Michelin-starred Antonello Sardi, who started out as a dishwasher. By the end of our eight-course, 3-hour lunch, the couple is strongly considering it.

The Thottrups’ love of authentic Italian creations is most evident at Borgo Santo Pietro, their 200-acre resort located about 70 minutes south of Florence. “When we bought Borgo in 2001, it was originally going to be a country home for us,” says Jeanette. “But as we were going through the renovation process, it was such an undertaking, I didn’t think it made sense to keep it just for us. We fell in love with the region, and it was something we wanted to share.”

Ten years later, the 13th-century estate thrives with 20 rooms, a tennis court, a spa, two restaurants (Meo Modo is a destination in its own right for chef Mattei’s farm-to-plate fare), organic gardens, and 300 sheep that produce milk for the pecorino cheese. Jeanette has spent the last 4 years developing a skin-care line, Seed to Skin, for which all the ingredients are either grown on-site or hand-sourced by the Borgo team. The Thottrups have also planted vineyards and eventually plan to make their own wine. But it is the launch of Satori—an extension of the Tuscany property featuring much of the same service, food, and products—that has perhaps been their biggest labor of love yet.

Claus says that the sailing yacht—which was built over the course of 3 years in a Turkish shipyard developed expressly for that purpose—is somewhere between a traditional Turkish gulet and a schooner. Jeanette, meanwhile, stresses that it represents a modern concept with ample deck space divided into different areas. “So often you see sailboats with all of the deck space crammed in the back,” she says. “The last thing we wanted was for people to have to spend all their time belowdecks, so we made the layout up top completely unique.”

The spacious foredeck includes a trio of lounge beds. At night, additional lounge chairs are brought out, and the space transforms into an outdoor cinema. (A catalog of hundreds of films can be accessed on any of the yacht’s televisions via iPad controllers.) The main deck comprises a dining table for 12, placed just beyond the open kitchen. “We wanted our guests to interact with the chefs and see the food being prepared. It’s such an integral part of the experience, and we wanted it to be more immersive,” says Jeanette, who adds that cooking lessons will also be offered. “It’s the opposite of a motorboat, where you sit on top of the deck and everything is happening underneath.” An enclosed living room with plush sofas and a library follows, while the aft deck features a bar, daybeds, and additional sofas and lounge chairs.

While Satori’s layout might be modern, the yacht’s aesthetic is decidedly vintage. The chairs in the dining room are the same ones found at Harry’s Bar in Venice, and the silver Champagne coolers are from the Italian navy, circa 1920. Large-scale black-and-white photos from Greek photographers of the 1920s and ’30s are scattered throughout the ship, capturing marine life, fishermen, and sponge divers.

Satori accommodates as many as eight passengers in three nearly identical staterooms, plus a master suite that spans the width of the ship. A spa suite can convert to a queen-size stateroom to host two additional guests, but otherwise it functions as a treatment room with a massage table and en suite bathroom. “The point of the ship was to make a real hotel on the sea,” Claus says. “Most of the time, with sailing, you either get a rugged ship designed for racing that is terribly uncomfortable or a comfortable ship that isn’t really equipped for actual sailing. We’re combining the best of both worlds, and the result is streamlined, elegant, and aerodynamic.”

Perhaps most enticing is the Thottrups’ dedication to creating the best possible experience for their guests. “We’ve spent the last year creating carefully curated itineraries in and around Italy, which we’ll adjust as we can to accommodate individual guests’ needs and weather concerns,” Claus says. “One of my favorites starts in Amalfi and goes to Capri and then to a lot of lesser-known places like Palmarola—a small uninhabited island full of grottoes and turquoise lagoons and named the most beautiful island in the Med by Jacques Cousteau.”

Our group had originally boarded Satori at the marina in Portiglioni, about 45 minutes south of Borgo Santo Pietro. It was late summer, so there was no shortage of prestigious motor yachts making their way through the Med—but Satori still stood out.

We headed for Elba, anchoring just in time to catch the last of the sun as we made use of the ship’s Seabobs, paddleboards, and wakeboards. After exploring the island, we arrived back on board for dinner. The formal dining table and handpicked place settings were elegant, but the mood was informal as we interacted with the chef and crew while they prepared and served each course. At meal’s end, Claus suggested another glass of wine on the foredeck, which had been transformed into a cinematic space. “Be careful though with the glasses,” he warned.  “It’s inevitable you’ll fall asleep on the lounge chairs before the movie ends.”

Sure enough, I could feel my empty glass start to slip between my fingers as I drifted off, delightfully exhausted after a beautiful day aboard Satori.