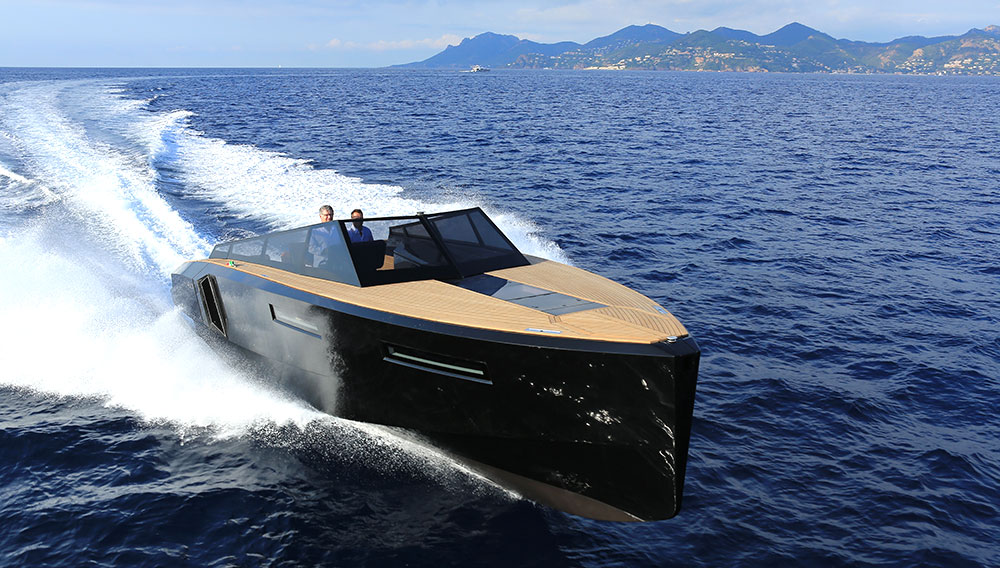 Italian shipbuilder Evo Yachts has added its own twist on the expanding cockpit with the new Evo 43, recently launched at the Cannes Yachting Festival and also seen at the Monaco Yacht Show. Wider Yachts first pioneered the concept of a tranformable hull in 2011 with a 42-foot cruiser that, with the push of a button, would fold its midsection outward to nearly double the deck’s size. However, rather than folding out from the center, the Evo 43’s sides open along the boat’s stern quarters while a separate section lifts upward and outward at the transom, transforming the cockpit into a multifunctional platform.

Designed by naval architect Valerio Rivellini of Studio Tecnico Rivellini in Naples, Italy, the Evo 43’s black hull is paired with all-teak decks and a sweeping wedge-shaped windshield that combine to lend a minimalist, futuristic look. The aesthetics proved head-turning at the Monaco Yacht Show, where the boat slowly toured the superyacht-filled marina with its transom in the open position (although the two female models sunning themselves on low-riding seats at the stern certainly did not deter attention either).

Combining cutting-edge naval architecture with contemporary design, Rivellini’s goal was to create a boat that exudes both high style and functionality. Working with Evo Yachts’ parent company Sea Engineering Group, Rivellini paid particular attention to the design of the hull—which underwent extensive computational fluid dynamic studies—and the build process to ensure a 20 percent gain in displacement compared to similar cruisers. Powered by twin Volvo Penta IPS 600s, the Evo 43 reaches a top speed of 38 knots and, when cruising at 30 knots, a range of 300 nautical miles.

Those performance numbers are impressive enough for an express cruiser, but the transformative cockpit is the real star of the show. In open position, the deck measures 270 square feet—40 percent larger than in its closed position. Controlled by a smartphone or a tablet, the sides of the hull open in less than a minute. The back panel—operated by a separate crane-like mechanism—can be raised upward and tilted backward to let a guest step aboard from a dock, or it can be lowered four feet into the water to allow swimmers to get back into the yacht without struggling. For even more shape shifting, the 43’s modular seats can be rearranged in different configurations or done away with altogether for a completely open deck. And an outdoor galley (with an induction stove, sink, and refrigerator) can be hidden away into the side of the cockpit.

Rivellini extends the boat’s minimalist theme to the cabin, using just teak, leather, and glass as decorative materials. Interior amenities include an optional Bang & Olufsen 42-inch television, a glass stairway with LED lighting, and a separate head and shower. Even the leather storage boxes are modular, freeing up space as needed. (evo43.com)