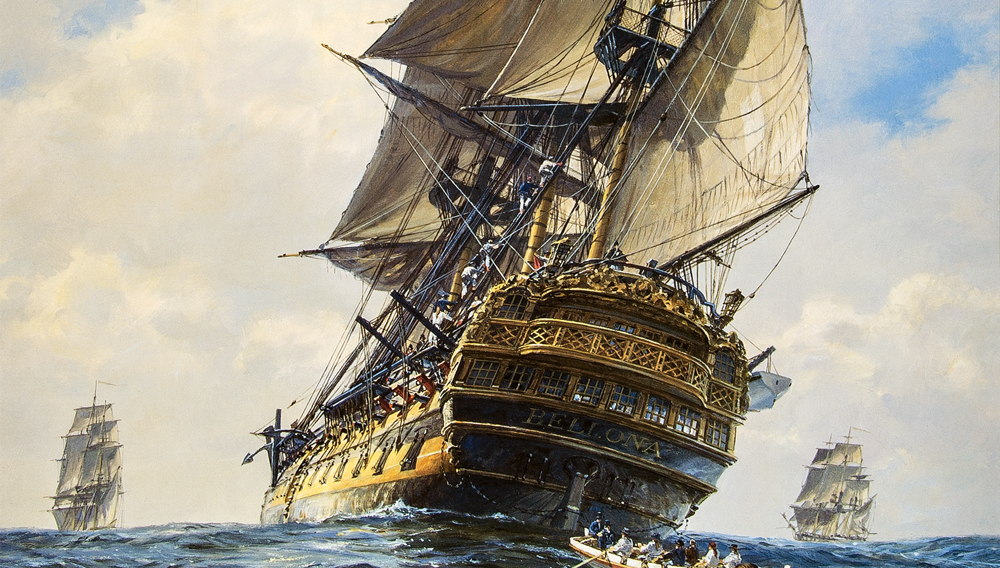 In marine painting, accuracy is everything. The water beneath a majestic vessel sailing away from Southampton, England, had better be milky green and not Caribbean blue. Even if every sail on an 18th-century battleship is depicted correctly, the wind filling them must be blowing from the right direction. And woe betide the marine artist who omits or misplaces a rope on a ship’s rigging. Collectors of marine paintings tend to be pedantic, and an error in the details can call the entire canvas into question and squelch any joy that it would otherwise engender.

Geoff Hunt, a 67-year-old English marine artist, is widely regarded as a master of accuracy. His skills made him the ideal choice to paint the cover images for all 21 of Patrick O’Brian’s Aubrey–Maturin novels. The nautical-fiction series, which debuted in 1969 and concluded in 2004, is celebrated for how believably it portrays life in the British Royal Navy during the French Revolutionary and Napoleonic Wars. Hunt was first hired for the series in 1988, when he created a cover for the upcoming entry The Letter of Marque. He also painted new covers for the 11 Aubrey–Maturin novels that had already been published.

O’Brian’s stories may be believable, says Hunt, but they are not necessarily accurate. And contrary to the prevailing perception, the same goes for Hunt’s cover paintings. “A lot of this stuff we don’t actually know,” he says, referring to the particulars of how 18th-century ships operated. “A lot of the people who knew how to do it never wrote it down. They were trained by guys who knew how to do it.” (The expression “Show you the ropes” originates from this practice of teaching about sailing through demonstration.)

Hunt says that guidebooks on sailing did not appear until the 19th century. “It makes Patrick O’Brian’s achievements more remarkable, because he was able to create the illusion that he understood how 18th-century battleships sailed and fought,” he says. “He created the illusion, and I created the illusion [in the cover paintings].”

Hunt—who lives in Wimbledon, England, and by coincidence works in a studio located on the site where the home of the British war hero Lord Nelson once stood—is in high demand and well compensated for his work. His commissions, which can also include contemporary vessels, start at about $13,000 for an 18-by-24-inch canvas and rise with the work’s size. His waiting list is 18 to 24 months long, and he estimates that he produces roughly 10 paintings annually.

Hunt has painted the covers for many books in addition to those in the Aubrey–Maturin series. His works include the cover images of the first nine entries in Julian Stockwin’s Thomas Kydd series and of books by the late English sailor Tristan Jones.

When Hunt paints a historical ship, he begins by locating its logbook in a naval archive and reading it. For a fictional ship, he looks to the author’s manuscript and seeks information on the vessel’s nearest real-world counterparts. “The work wasn’t done by me. It was done by the guys who experienced it and wrote it,” he says. “The trick is to take all those factual elements and make it look interesting visually. There’s always storytelling in the picture.”