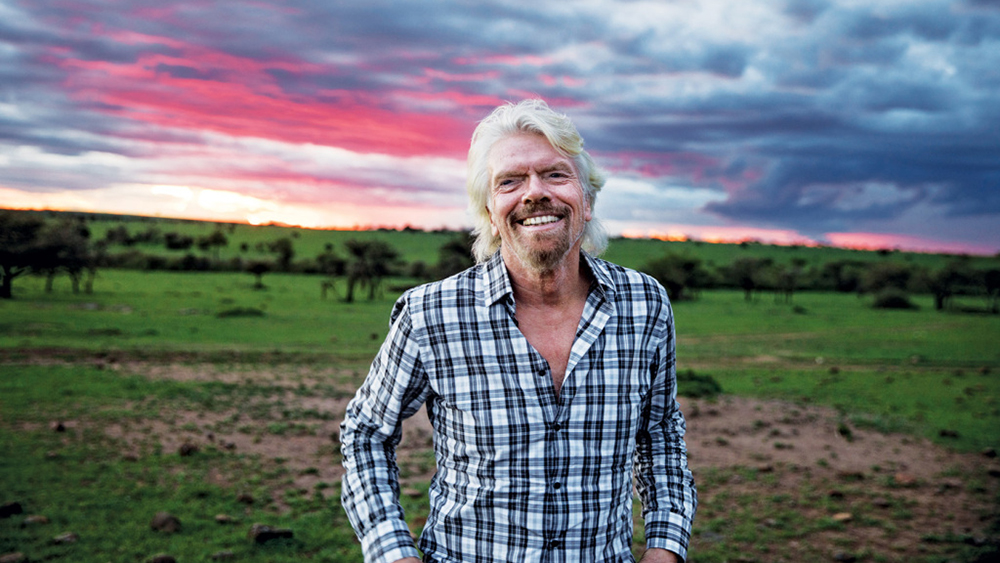 It’s safe to say Sir Richard Branson knows a thing or two about traveling. Fresh off of a red-eye flight from New Orleans for the opening party of Virgin’s new $80 million property in the emerging South of Market neighborhood in San Francisco, Robb Report had a chance to catch up with the jet-setting billionaire in the hotel’s Shag Room to talk all things cruising, Virgin Galactic and the one thing he wouldn’t even consider going into orbit without.

Talk to me about Virgin Voyages. What are you most excited about?

Everything I think. I mean, I’m not a cruise fan.

A non-cruise fan, who is launching a cruise line. Tell me everything.

So, I mean, I’ve never been on a cruise ship. I’ve never been interested to go on a cruise ship but we decided let’s take a chance, let’s see if we can create the kind of cruise ship that ourselves and our friends would have a blast on. And I’m looking forward to seeing whether we delivered. But I think it looks like it’s going to be absolutely stunning and unlike any other cruise line. For instance, you know, we won’t have any buffets on it. There will be 35 different restaurants throughout it. The entertainment will be like nothing else that’s out there.

Having never been on a cruise ship, what motivated you to enter into this arena?

The thing that motivated us with a lot of the Virgin companies is a desire to do it better. I mean, we talked to a lot of people that had never been on cruise ships like myself, and said, “Why? Why have you never been on a cruise ship?” And obviously, the vast majority have never been and never would even consider doing it. And then we said, “Well, what do we need to do to entice you onto a cruise ship?” So, we are hoping to open the market to hundreds of thousands of people who have never been on a cruise ship. And it’s quite an endeavor; each ship costs $800 million to build, and we are building five of them. So it’s, you know, big and bold and exciting. And yeah, I am looking forward to you being on it and letting us know what you think.

Good, you can give us your feedback.

So who are you trying to attract? Who’s the audience for this?

I first started working on starting a cruise line when I was 27, and it was going to be for under 30-year-olds only, and I made it under 31, and 31 then turned to under 40. Then under 50. What is it now? Under 70. But you know, I think at Virgin, we just try to make it fun for any age in the end. And, you know, older people want to party generally as much as younger people if they’re given the chance, especially if there’s good music and good drinks and the right atmosphere.

Tell me a little about the design and general aesthetic of Virgin and how is it carries through from hotel to cruise ship to space ship?

I hate to say it but it’s our 50th anniversary at Virgin and we are doing a beautiful coffee table book about the 50 years of design of Virgin, you know, starting from Never Mind The Bollocks and the Sex Pistols right to the beautiful space port that’s being built right now in New Mexico and the space liner and quite a lot in between. You know, if you are going to go on a space ship, it needs to be sexy and feel like a space ship. If you are going to go to a space port, it needs to just come out of the desert in the most, you know you need to feel something very special very special and so we do take design very seriously. Obviously we have the advantage that Virgin Voyages, which will launch later this year, they have been able to draw on designers from Virgin Australia, you know, all the various Virgin companies and then create something really special.

OK, talk to me about Virgin Galactic. When are we going to space?

It’s been 14 long years. We had a really successful six-months putting five people into space. The first time actually an American company or NASA or anybody has put people in space from American soil since 2009 so yeah, historic times. We are now moving everything to New Mexico over the next three or four months. We’ll do a couple of more final test flights and then, I’ll be going up and then others will be going up.

Obviously you need to go. If it’s as successful as I think it should be, the price should go down and down and down in years to come here so hopefully 20 years from now, you can become an astronaut and lots of people can afford to become astronauts. Obviously, initially it’s going to be rather frighteningly expensive.

Why space, why now? What is the driving factor behind this mission?

The 50th anniversary of the moon landing and I remember as a teenager watching and thinking, one day we will all be astronauts. And at first it didn’t happen because the governments were not interested in putting your needs in space. So, we thought, let’s build our own spaceships and our own rockets and try to enable people to be able to go to space. And you know, we have got nearly 800 people who have signed up. Tremendously exciting. I’m looking forward to that moment of looking back on the Earth. I’m sure it’s going to beautiful and I can’t wait for that experience.

If you could only take one thing with you on your journey to space, what would it be?

I don’t think I’ll have time to take notes in a notebook. I would be too busy wanting to look out of the window. I mean, generally speaking, the thing that I couldn’t be without is a notebook. I need to have one at all times—I mean almost in every moment, whether it’s having a conversation with people and there are ideas that come up and I want to scribble them down and learn through people as much as I can. But in space, let me think. Yeah, I mean, I’m working on trying to be as healthy as possible for the trip. And I would like to take a healthy body and be ready to really enjoy the experience. And it’s going to be quite a rush. I mean, we are going to be going from one naught to three and a half thousand miles an hour in seven seconds. And, yeah, looking forward to enjoying that experience too.