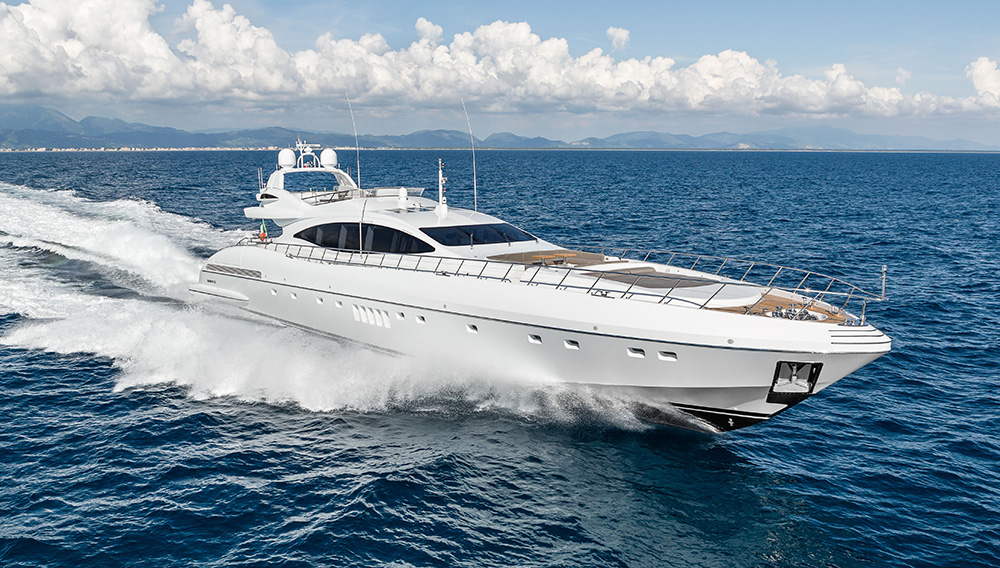 The new Overmarine Mangusta 132 yacht, which made its debut at the 2015 Monaco Yacht Show, is not just a typical undifferentiated middle child. The fourth model of the Mangusta Maxi Open series, falling between the 94, 110, and 165 E, the 132 is a beautiful beast on the ocean and shares the family’s sleek, aggressive profile with an exceptionally long forefoot. Long side windows, a 20-foot-wide windshield, and four skylights bathe the interior with natural light. The exterior is a sun worshipper’s heaven, with double sunbeds, a large cocktail bar on the flybridge, a hot tub that can turn into a triple sunbed, and a large alfresco dining table in the cockpit. Overmarine also made the long bow area more functional than most found on this yacht type by integrating sunbeds and a built-in table with seating.

The interior, customized to the owner’s tastes, was fashioned with a luxury villa in mind. Snow-white leather ceilings, sand-colored oak flooring, walnut walls, and stainless-steel accents combine to create contemporary and light-filled spaces. The main deck features a dining area, a large walnut table with steel insets, a social area facing a large flat-screen television, and a bar topped with Crema Luna marble. Just forward, the wheelhouse is separated by a wall with a glass window and two side glass doors featuring a push-button-control darkening system that allows the owners to enjoy total privacy when the system is set to opaque mode; or they can watch the captain running the yacht (from behind an all-glass touchscreen at the helm station) when it is set to transparent mode.

Belowdecks, the owner opted for a second salon with a large-screen television, three guest cabins, and a full-beam owner’s suite with a separate head. The designers applied the same beautiful walnut walls and oak flooring across the guest accommodations.

Overmarine introduced a new hull last year on its flagship Mangusta 165 and has incorporated the same design onto the 132. Connected to the triple 2,600 hp MTU diesels and Kamewa NP waterjets, the 132 can happily cruise at 32 knots and reach a top end of 34 knots. (overmarine.com)