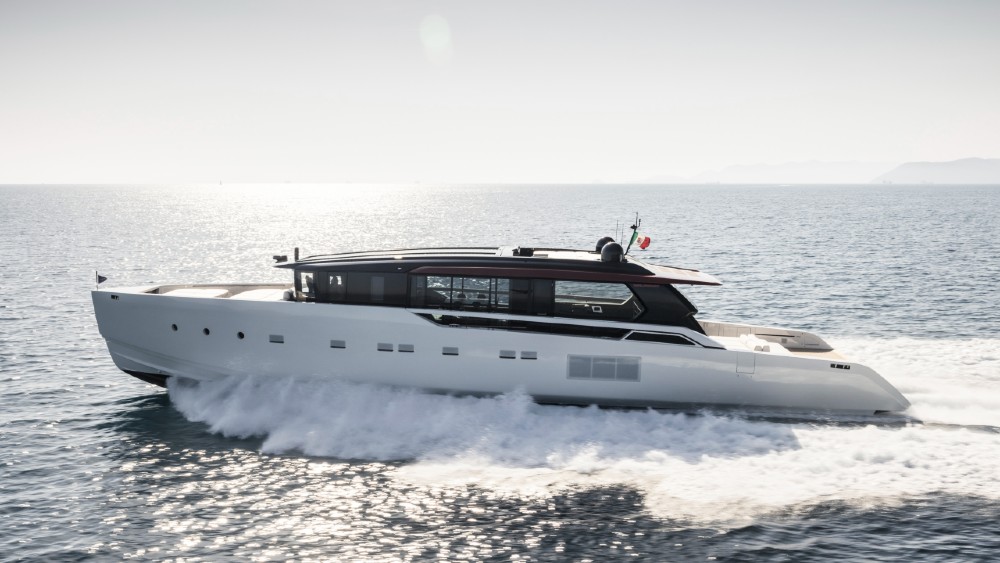 Following a sneak peek at the Venice Boat Show last summer, Sanlorenzo’s SP110 will make a proper debut at the Cannes Yachting Festival in September. The 108-footer is one of a dozen or so global launches at the first big show of the season. But the standout design is more than an also ran. It could actually reshape design for large sports yachts.

Or not. Given its radical design, it could be another specialist yacht for a handful of owners until the rest of the yachting world catches up. Sanlorenzo’s Tilli Antonelli was the lead on a team that included naval architect Marco Arnaboldi who designed the running surface, Bernardo Zuccon for the exteriors and interiors, and Piero Lissoni who completed the interior styling and decor.

Antonelli has had breakthrough designs in the past, most recently at Wider Yachts, which he founded in 2010. His Wider 42’s expandable midsection made the boat much, well, wider. It was years ahead of its time. Eventually the rest of the boating world caught up. Now, expandable decks are common on boats from 28 to 150 feet.

Notice the split-level interior. It not only offers water views, but also creates an open plan on the interior.  Courtesy Sanlorenzo

The SP stands for “Smart Performance,” which, on this boat, is more than an acronym. This SP110 is notable for its top speed of 40 knots, making it the fastest Sanlorenzo to date. But even more interesting is the power configuration: three MAN 2000 hp V-12 engines mated to jet drives. This propeller-less configuration not only lets the boat run on one engine for better fuel efficiency, but offers exceptional maneuverability and faster acceleration.

Zuccon’s exterior is also a breakthrough design. The profile actually looks low, almost squat, for a yacht its size, but this unusual superstructure actually hides a large two-deck interior that seems more like a big glass house than a yacht cabin. The rear entrances for the split-level decks are wide open, allowing excellent visibility of the stern and sea from anywhere inside, but also creating a clear link between upstairs and downstairs.

The uncluttered rear deck can be configured with loose furniture for social events or, when running, carry the tender and water toys. The bow’s alfresco dining area is a rare design that allows owners to take advantage of ocean breezes. Typically, dining areas are on the stern. These innovations will certainly make the new Sanlorenzo a standout at Cannes.

The squat-looking profile is unconventional, but offers a sleeker design than typical yachts this size.  Courtesy Sanlorenzo Yachts

With all these big design cues, it’s almost too easy to overlook Lissoni’s interior, which suits the boat perfectly. It’s a simple design that matches the glass-house feel of the interior with some custom décor but nothing ostentatious. It works well to complete the package.

The SP110 is one of two Sanlorenzo boats debuting at Cannes this year. The other is the third model in the shipyard’s semi-displacement SD fleet, the 79-foot SD90.