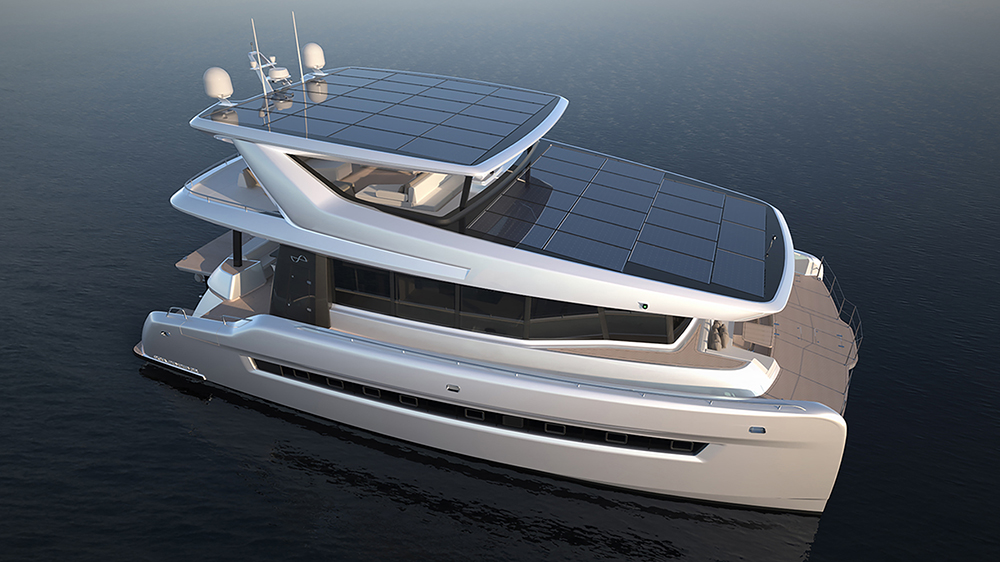 There are already a few solar-powered catamarans on the market, but Soel Yachts is hoping its new addition will be an outlier when it comes to range.

The Dutch yard, which started delivering solar-electric ships back in 2016, has just unveiled a new energy-autonomous cat with the ability to cover some serious nautical miles.

The zero-emissions multihull, known as Senses 62, comes fitted with rooftop solar panels that generate up to 50 kWh of clean, green energy to power the vessel and the onboard amenities. This eliminates the need for dock charging and enables the vessel to replenish itself at sea. It also has DC fast charging capabilities, if you’d prefer to get your juice at the shore.

Equipped with a 564 kWh battery, the cat can cover 263 nautical miles when traveling at 4 knots.  Soel Yachts

In addition, the 62-footer comes equipped with Soel’s proprietary active cooling system, which helps increase energy harvests by 15-20 percent. All that solar power is stored in batteries on board and used to fuel the electric propulsion system.

Onboard, there’s room for up to nine seafarers.  Soel Yachts

Regarding range, the yard says Senses 62 is capable of transoceanic crossings. The exact distance varies as per the setup, but, to give you an idea, Soel says the range-topping cat with a 564 kWh battery can cover 263 nautical miles when traveling at 4 knots.

Popular Austrian builder Silent Yachts, who is credited with producing the world’s first solar-powered catamarans, offers a similar 60-footer with twin 340 kW electric motors, a 286 kWh lithium battery and a 145 kW generator. The Silent 60 touts a cruising speed of 6-8 knots, a top speed of 13-20 knots, and, again, that decidedly vague “transoceanic range.” Suffice it to say, range is a difficult thing to predict with so many variables at play.

Onboard, Senses 62 luxurious living quarters come complete with multiple lounges, two dining areas, an office and an open galley with bar. The vessel can also accommodate up to nine passengers and three crew.

The Senses 62 catamaran starts at $2.95 million—but, hey, think of all the cash you’ll save on fuel.